PLAYING WITH A HANDICAP December 1 2003

An unusual group of golfers taught me a lesson about prejudice

IT IS SOMETIMES difficult to see the positive in how our justice system works. Newspapers and television are full of stories that highlight how early parole or poor supervision of convicts on day passes or in halfway houses have resulted in new offences. The system is not perfect. But there are positive examples. As part of a restorative justice program, inmates at a minimum-security facility in British Columbia are encouraged to liaise with community groups, which provide them with opportunities to interact with non-offenders and supervised programs that enable them to give back to the community, and help

with their eventual reintegration into society. I agreed to participate in a fundraiser for one of the non-profit groups connected to the program, without a clue as to what that would really involve. Never did I think that when I volunteered my time I would end up playing golf with prisoners on a course adjacent to the Ferndale Institute in Mission. Helping out had gone from lip service to putting my money where my mouth was. As we teed off in mixed foursomes of two prisoners and two non-inmates, the ingrained prejudice that “these are bad people, danger, stay away” filled me with terror. My discomfort translated into body language and silence. I was aloof and rude. But the men, used to such prejudice, showed an amazing grace. They chatted among themselves about ordinary things—improved golf swings, yesterday’s scores, the stray cats that wandered onto the golf course from time to time. This opened a window onto ordinary life that I could connect to my own frame of reference. No one was plotting murder or planning robbery.

Gradually, the wall around me began to crumble. Pointers on my not-so-inspired golf game were offered, followed by praise for correcting my strokes. I was supposed to be offering support and encouragement and instead I was being given it? This caught me off guard and, as we moved from hole to hole, I eventually relaxed. I was embarrassed by my initial aloofness. My teammates, their golf skill and their honesty impressed me. Without prompting, one of my fellow golfers began to speak about how

he had changed. He readily offered regret that it had taken him so long to see his mistakes and to want to change.

Afterwards, we indulged in the requisite post-mortem of bad shots and poor scores over hamburgers and coffee. I was being treated with a respect that was refreshing, even chivalrous. I was not, as I had earlier feared, ogled or spoken to with course language. The opposite was true. When I approached the picnic table or got up to refill my coffee, all the men stood. Wow! I was

repeatedly thanked for taking the time to sit and listen to their stories and their dreams for the future. They showed me carved wooden boxes made in the institution’s workshop and paintings displaying talent I envied. I met the stray cats that had found a home among them, and as one calm feline sat quietly on the lap of its caregiver, I saw a real gentleness of spirit.

I did not ask about the crimes each man had committed, nor was the information offered. It didn’t matter. Over the course of the afternoon something had happened; I realized I was having a good time. I had to

pinch myself to remember that I was on the grounds of a federal correctional facility.

I was no longer afraid of those with whom I had played golf, but rather the prejudice of others. I wanted to tell my friends and family about my experience. I wanted to tell them that I’d been a part of something truly special, that I had had a rare glimpse into something amazing in the rehabilitation of these men’s lives. I was sad, though, because I knew my story would be met with skepticism. I began to worry about the lectures I would receive for having placed myself in this situation. I could see the disapproving looks that would translate into: “Was she nuts? What had she been thinking?” I knew that the moment I opened my mouth, I would be confronting society’s dominant attitude that there is an “us,” and there are those who have failed society, broken our laws and with whom nice people do not associate. This attitude has ramifications: the golf course was closed a year ago because of public pressure.

I agree that if society is to function properly there must be laws with consequences and accountability. Sometimes, unfortunately, it is true that second chances are not possible. Other times they are. I golfed with those who accepted the mistakes they’d made and want to create a difference in how they now live. It takes courage to acknowledge error, pay the price and come out the other side having become a better human being as a result. The sincerity of our conversations convinced me that sometimes people can—and do—change.

I stepped into a situation with a preconceived idea of what I would find. But it wasn’t those whom I met that fitted the mould society creates, it was me. I was exactly as predicted, and the irony is that I too changed as a result. 1?!

Jennifer Cole is a freelance writer in Vancouver. To comment: overtoyou@macleans.ca 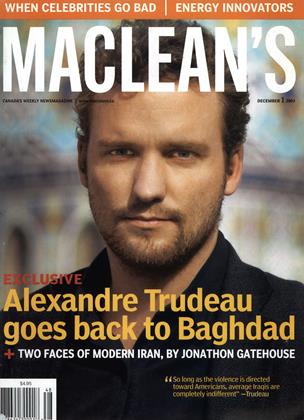