PAUL MARTIN looks like a solid enough target as he prepares to be sworn in as prime minister this week. But when Maclean’s gave three opposition leaders a chance to take their best shots at him, they all sounded a little frustrated—as if they were being asked to spar with smoke. Stephen Harper, Jack Layton and Gilles Duceppe all complained, in their different ways, that Martin has not offered much in the way of firm policy promises for them to take a poke at. Still, in this week when attention is squarely focused on the man coming into power, and the fortunate Liberals he will name to his first cabinet, it’s worth taking stock of where his main adversaries see gaps in Martin’s formidable armour—and how they hope to exploit the openings.

The opposition parties have Paul Martin in their sights, writes John Geddes

At least in theory, Martin represents a potential disaster for the new Conservative Party of Canada—assuming Alliance and Tory members vote to join forces this month. First, Martin’s reputation as a deficit-slayer could allow him to lure votes from the merged party’s natural constituency among Canadians who lean right on economic issues, particularly in the West. Second, his strong contingent of advisers with western roots, such as Saskatchewan-bred strategist David

Herle, and likely cabinet heavyweights, including another Saskatchewan product, Ralph Goodale, suggest he might prove more adept at winning over the region’s voters than Jean Chrétien, or John Turner and Pierre Trudeau before him.

But Stephen Harper brushes off Martin’s widely touted western appeal as a bit of political déjà vu. “We’ve heard all this before—about Jean Chrétien,” he says. “In 1993, he was the conservative guy and popular in the West.” Harper says it’s only a matter of time before Martin’s lack of specifics on issues of special concern to western voters catches up with him. “Where he’s vulnerable is his vagueness,” he says. “He talks about ending alienation, but he has to be specific about how he’s going to orient the government toward more sympathetic positions on western interests.” Harper rhymes off issues of particular concern to many in the West on which Martin hasn’t signalled how he might distinguish himself from Chrétien— from the federal gun registry’s staggering cost overruns, to the Canadian Wheat Board’s monopoly on selling grain.

But Harper is most cutting in his attack on Martin’s credibility on reducing what he calls the “democratic deficit.” Martin has made much of his intention to reform Parliament, giving backbench MPs more freedom and power. This is a traditional theme of the Alliance and its predecessor, the old Reform party—so it’s no

wonder Harper isn’t giving it up to Martin without a scrap. He suggests that if Martin purges Chrétien-era cabinet ministers this week, it will cast doubt on his real willingness to allow dissenting opinions to bloom in his own Liberal caucus. “He’s made it his first objective to end the political career of anyone who ever opposed him,” Harper says. “In terms of the democratic deficit, it’s a sign of things to come.”

Layton (far left) and Harper hope to score some points

Martin will soon have a bull’s eye on his back

‘He’s made it his first objective to end the political career of anyone who ever opposed him. In terms of the democratic deficit, it’s a sign of things to come.’

‘If this guy were in an accounting class and mis-estimated the surplus by sudi a huge amount year after year, he’d be flunked.’

Harper is not certain to be the leader Martin faces on his right, and western, flank. But the latest polls suggest the Calgarybased AJliance leader is the front-runner to head the new party. A recent poll for CBC by the Quebec opinion research firm SOM asked which leader would prompt Canadians to vote for a merged right-of-centre party. Harper got 26 per cent support, ahead of Tory Leader Peter MacKay, who received 23 per cent. But out of those who declared themselves likely to support the new party, Harper received a dominating 60 per cent support, compared to MacKay’s 29 per cent. Those numbers could well change in a leadership race. But for now, it looks as though Harper will be defending the western bastions of conservative support—and trying to prove wrong predictions the new party could take a beating in its first electoral test.

Martin strategists warned Liberals MPs last week to take seriously signs of a resurgent New Democratic Party. It’s been a long time since the NDP looked like a force to be reckoned with in federal politics—perhaps not since Ed Broadbent led the NDP in the 1984 election. But the recent SOM poll put the New Democrats in second place with 17.5 per cent support, far behind the Liberals’ dominating 57.5 per cent, but well ahead of the 12.6 per cent for a new united right party. NDP Leader Jack Layton attributes his relatively strong showing to broad trends, rather than any particular strategic steps taken by his party. “Public opinion is moving in the direction of thinking, we don’t need to cut taxes so much, we should spend, we don’t think the private sector is the beall and end-all,” he says.

Layton is not alone in reading a leftward drift in the Canadian mood. “The neo-cons have had tremendous legitimacy and won many of the debates,” says Allen Mills, chair of the University of Winnipeg’s politics department. “But the pendulum is

swinging. People are saying there is a role for government, there is a role for regulators.” If that’s true, Layton’s challenge is painting Martin as trying to pull the country in the opposite direction. He argues the first concrete evidence of Martin’s essentially rightof-centre instincts will be the cabinet he names this week. Layton points to the expected exit of ministers such Jane Stewart, Allan Rock and David Collenette—members of Chretien’s cabinet he now credits as voices for progressive policies, though he didn’t offer the same praise while they were securely in power.

Beyond critiquing Martin’s cabinet, Layton is gearing up to slam what he expects to be a low-spending policy approach. Some economists say the $2.3-billion federal surplus projected for the 20032004 fiscal year by the federal Finance Department—barely enough to cover $2 billion pledged to provinces to help out with health costs— far underestimates the likely figure. That would follow the standard lowballing of the surplus during Martin’s period as finance minister. “If this guy were in an accounting class and mis-estimated the surplus by such a huge amount year after year, he’d be flunked,” Layton says. But Martin clearly favours extreme caution in budgeting.

Beyond clashing over how much there is to spend, Layton will want to take on Martin over cities. Martin has made much of his desire for a new approach to urban issues, including his willingness to share a portion of the gasoline tax with municipal gov-

ernments. Layton, who jumped to the federal scene from a long career in Toronto city politics, predicts Martin will put off that measure by setting up a long process of meetings with provincial and municipal leaders. More immediately, Layton wants to see a powerful minister handed responsibility for urban affairs when the cabinet is sworn in this week. Handing responsibility to a junior minister or a parliamentary secretary won’t cut it, Layton argues. If Martin takes that approach, watch for the NDP leader to take this early opening to attack the new prime minister on his much-touted cities strategy.

GILLES DUCEPPE Scan the headlines and the outlook for the Bloc Québécois is grim as Martin prepares to move into 24 Sussex Drive. Polls show the separatist party in trouble, and a Bloc MP recently defected to Martin’s Liberals. Yet Gilles Duceppe, the Bloc leader, claims not to be worried. He points to opinion surveys that find support for sovereignty remaining quite solid among Quebecers at better than 40 per cent—a reliable base of potential Bloc voters. And he argues that the “Martin effect”—a bounce in Liberal support in the polls as Chrétien exits—has been stronger in the rest of Canada than in Quebec.

‘There will be a lot of questions, not just about him as prime minister, but a lot of personal questions.'

Still, for all his confident talk, Duceppe and the Bloc have left little doubt in their assaults on Martin that they view him as a dire threat. Bloc MP Louis Plamondon has even published Le Mythe Paul Martin, an 88-page book attacking the new prime minister over alleged policy inconsistencies and questions of personal character. And Duceppe not only takes aim at Martin’s record as a finance minister, but passes up no opportunity to slam his record as a businessman for registering part of his Canada Steamship empire in foreign jurisdictions, such as Barbados, to avoid Canadian taxes and regulations. Duceppe vows to make Martin’s corporate use of such “fiscal paradises” an election issue in Quebec next year. “There will be a lot of questions, not just about him as prime minister, but a lot of personal questions,” Duceppe says.

But Martin does not look to be in any immediate danger of being seriously undermined in his home province. SOM pegged Liberal support in the province recently at 49 per cent, well ahead of the Bloc’s 33 per cent. “Martin can feel really comfortable right now,” says SOM analyst Guy Larocque. But the Bloc is dipping toward very uncomfortable polling territory. At around 30 per cent, Duceppe’s forces stand in danger of losing a lot of their current 33 seats by close margins in the election widely expected next spring, according to Larocque. And he said an intriguing development is Martin’s appeal even among Quebecers who say they would vote Yes if another referendum was held: 22 per cent of those sovereigntist voters say they would nevertheless support Martin in a federal election.

But Duceppe argues that those who don’t believe in Canada will think twice before casting ballots for Martin’s Liberals. “What will those people do? Vote for a party that says just the opposite of what they are thinking?” Oddly, his best break could be the result of the victory of the Quebec Liberals under Jean Charest in the provincial election last April. Charest’s budget-tightening policies are proving, at least temporarily, widely unpopular. A backlash against his federalist regime in Quebec City just might push some voters to support Duceppe’s sovereigntists in a federal election. “The only thing that can save the Bloc,” says Larocque, “is the unpopularity of the Charest government.” ['ll 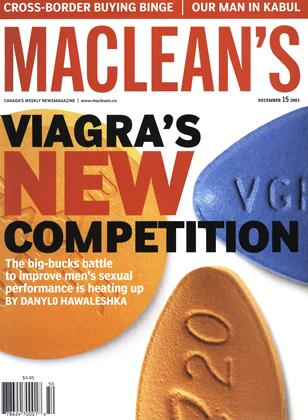