THERE’S NOTHING quite like the deafening rat-tat-tat bursts of machine-gun fire to focus your attention. We’d spent almost two hours staking out a bridge for an ambush. Wind-whipped clouds—stragglers from the snowstorm that blanketed the forest and fields the night before—kept the moonlight to a minimum. A biting wind stung our faces and my feet were slowly growing numb from sitting around in the damp cold. The platoon of reservists skulking in the shrubberyinfantry belonging to the 48th Highlanders of Canada—were poised for their planned assault when the bright white flash of a distant mortar round lit up the night sky like fireworks, signalling the attack had begun.

We expected enemy soldiers fleeing the military action to retreat across our bridge. Platoon commander Lieut. Kris Karpinski had

ordered his men—and three women—to hold their fire until he started the ambush with a burst from his own rifle. I forgot all about the cold when the soldiers across the road caught sight of the enemy first and let loose with a C6, a general purpose machine gun capable of firing up to 16 rounds per second. The night’s inky blackness that concealed the machine-gunner and soldier feeding him ammunition was beaten back by the orange bursts of flame from the weapon’s muzzle. The firefight was on.

Luckily, it was only an exercise. The enemy were also members of the 48th, and everyone fired harmless blanks. But it was easy to imagine what could have been. Had this been real, the guys crossing the bridge would have been cut down. And Canadian army reservists could easily find themselves in the

line of fire. Some 15,500 supplement the 21,000 regular forces, with a further 3,000 to be added over the next 2lk years. Today there are more reservists serving Canada overseas than at any time since the Korean War: 276 in Bosnia, 119 in Afghanistan, and handful in missions in places like Sierra Leone and Congo. They make up about 15 per cent of the Canadian Forces now stationed in foreign lands. These part-time soldiers sacrifice their vacation time to volunteer for extended military training, and leave jobs or school to serve abroad.

Some join because they like guns. Others crave the discipline. Others admire what they describe as the noble role played by Canadian peacekeepers. Regardless of motivation, they willingly spend weekends cold and wet, away from family, as they did last

month when Maclean’s sent Chief Photographer Peter Bregg and me along on one of the 48th’s monthly training exercises.

The bridge ambush was staged near Meaford, Ont., about 150 km northwest of Toronto. The training exercise began on a Friday evening, with about 30 infantry members assembled at the Moss Park Armoury in downtown Toronto, home to the 48th Highlanders. The word “infantry” comes from infante, Italian for youth. How appropriate. Some of these kids didn’t look old enough to play with toy guns, and yet they handled lethal weaponry with aplomb.

“I see the military as an essential component of a nation,” said Lt.-Col. Ian Sargeant, head of the Toronto regiment. While full-time soldiers have the advantage of regular training, he said reservists also perform admirably. Sargeant, 39, who works for an on-line brokerage at a major bank, added that assessments of the 2148 th Highlanders currently serving overseas “have all been positive.”

The task at hand that Friday night was to sign out weapons and ready the gear. Most soldiers received a C7 rifle and five 30-round magazines (the soldiers got blank ammunition once in the field). Pte. Ray-

mond Morrell, 28, seated on the floor in the armoury’s parade hall, looked up from ration serving, or “individual meal packet” in army bafflegab, and tried to explain what he was doing. “I’m field-stripping my IMP,” he said. My blank expression told Morrell, a Canada Customs officer during the workweek, I didn’t have a clue what he just said. “I’m taking out all the extra

junk so I can fit it into my rucksack.” Oh.

Master Cpl. Clifford Farr, 26, drew the short straw and had to babysit Bregg and me for the weekend. We were assigned to his tent, along with three privates and a corporal. Farr spent the summer of 2001 in Bosnia, part of Para Company, 3rd Battalion, Royal

Canadian Regiment from CFB Petawawa northwest of Ottawa. Farr is married, has a one-year-old girl, and is studying electrical control systems at college. He joined the reserves at the age of 17. “I wanted to go to Bosnia,” he explained. “I wanted to be a peacekeeper. They seemed just and honourable, and I always wanted to be like that.” The two coaches ferrying the troops north from the city slowed down as the rain turned to wet, sticky snow. We spotted a car in the ditch. “It looks so cold out there,” said a voice from the back of the bus.

Cpl. Adam Priestley, 20, introduced himself. He signed on three years ago. “I wasn’t really a good kid when I was growing up,” he acknowledged. But Priestley, a martial arts instructor, enjoys the regimental comradeship. “We joke around, we’re good buddies,” he said, “but when it comes to doing the job, we’re professional.”

At 2 a.m. we arrived at the training grounds, but the bus couldn’t get up a hill. We waited for a six-wheel-drive “Medium Logistic Vehicle Wheeled,” or ML for short (who names these things?)—a big green truck with a tarp covering the back, built in the 1980s. When our turn came, we exited the com-

fortable motorcoach, to be blasted by the howling snowstorm. Mercifully, someone had set up our five-man tent that would sleep seven that weekend. A gas stove and lantern kept the interior comfortably warm. But it was chaotic, boots and wet clothing everywhere. Still, at 4:30 a.m. sleep came quickly.

We were up at 7:45 a.m. I couldn’t find my wool toque or my socks and started to panic. After digging around for about five minutes, I located them. Then, a liner for my borrowed army parka slipped out of the web harness I was wearing to carry gear. A soldier found it later, lying in the snow. I began to feel the headline for this story should read “Saving Private Dan (from himself).”

It’s only an exercise, but it’s easy to imagine what could happen in the real line of fire

The practice mission required the platoon to attack an observation post, then move on to the bridge. The soldiers were decked out in their “whites”—camouflage clothing that included white balaclavas. A five-man reconnaissance team, or recce patrol, had set out before us. We had trudged through forest and uneven fields for about an hour when Master Warrant Officer Paul McIntyre, an observer, delivered the news. “The recce patrol that was supposed to be here isn’t,” he reported. “The enemy attacked

them and they’re dead now.” McIntyre, 37, is a marathon runner with his own fitness company. “We don’t know what’s out there now,” McIntyre shrugged. “It means we have to be more cautious.”

The platoon spotted an enemy truck, but seemed to be intent on creeping off into the woods away from the vehicle. I decided, inexplicably, it would be all right to wander

SOME of these kids

didn’t look old enough to play with toy guns, and yet they handled lethal weaponry with aplomb

over and fraternize with the enemy. The next thing I knew I was under attack. It’s not a nice feeling. One group of soldiers swarmed toward a tent to my right, while about eight others zeroed in on the truck. I knew the rounds were blanks, but it was uncomfortable. I moved to put the truck between me and the

advancing, shouting hoard. Out of the corner of my eye I saw a soldier running toward me with a grenade. It landed just behind me. BOOM! (Even simulated grenades are very loud.) The soldiers took the truck’s lone occupant and me prisoner. “Urn, what’s the idea with you throwing that grenade at me?” I asked the soldier whose rifle was pointing at us. “Just following our drills, sir.” Right then.

Over the weekend, tactical mistakes, mostly minor, were made by just about everyone, from private to commander. The observers offered constructive criticism. Then, on Sunday morning, they all piled onto buses to return to their civilian lives. Many of these soldiers will never serve outside of Canada. Others plan to, or have already put their lives at risk in the name of their country. Some, like Farr, have considered transferring to the regular forces. He’s even started the paperwork a couple of times, but he knows missions that take you away from your family for months at a time take a toll. “I’m kind of torn,” Farr told me. “I’ve seen what it does to guys. I’ve seen them lose their marriages over it, and I don’t want that to happen to me.” Some sacrifices are too great, even for good soldiers. IT! 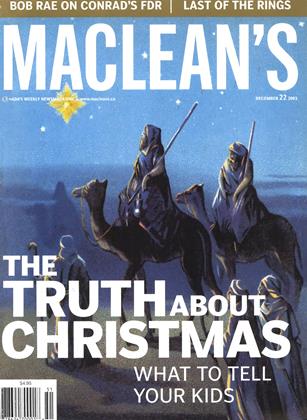