As a law enforcement officer, I have grave concerns about how this gun control is pitting otherwise honest folks against the justice system.

While America has made a lot of mistakes, it has also done a lot of good (“The New New World Order,” Cover, and “Consequences of War,” Editor’s Note, Jan. 27). Nobody but America destroys an enemy and then goes in and builds it up again. No country comes close to sending out the billions of dollars of aid that we do. We are at every disaster in the world. Maybe our biggest fault is that we have been too generous. It seems that the more we give, the more we are hated. Maybe it is time to pull back and let each nation handle its own problems. And yet how do you ignore the suffering of the innocents? I don’t want this war, but sometimes doing the right thing is frightening. Hopefully if we do go to war, the outcome will benefit the innocent victims. And, hopefully, Canada will stand alongside us.

How many times has everyone heard: “It’s all about oil.” While oil is nowhere near a decent argument for or against going to war, it’s a moot point. The oil is there, it rules the situation, so we have to deal with it. What I am really waiting to see is what the anti-war activists will do after the inevitable war? Will they then begin to work for human rights in Iraq? I doubt it.

As a Canadian working in the U.S., I am continually amazed at the attitude of many educated and intelligent Americans. They seem shocked that the world could possibly think the Iraqi war would be primarily about oil. They seem only able to see the gospel according to [Defense Secretary Donald] Rumsfeld. This myopia appears to be changing, however slowly. But will enough Americans come to their senses in time? And if they do, will it make a difference with Bush and Rumsfeld? I fear it won’t.

dropped on its homes, businesses, churches and institutions, to make a decision on invading and destroying any nation. If we look at the Europeans and their reluctance to join this madness, one must realize that their attitude toward this situation has been shaped by centuries of warfare, bloodshed, tears and fears for their livelihoods. They have come to realize that there must be another way, a better way.

We have much reason to thank Mr. Bush. He has, more than any other president, awakened us to what his country is prepared to do to preserve its “way of life.” Never have we been given such clear positions to debate. Readers of history recognize the theme of empire, but now the average citizen cannot ignore this watershed. Mr. Bush has provided us a cold jolt of reality, which is hard to do in our warm world of viral violence, sleazy advertising, superheroes and the good life.

The way George W. Bush presents his antiIraq “evidence” is reminiscent of newsreels from 1930s Germany. There is the same type of nationalistic bluster about the wellbeing of the homeland and the same un-

ceasing barrage of propaganda. It is amazing how the Bush crew has managed so quickly to divert America’s anger from Osama bin Laden to Saddam Hussein. I am sure the American people do not really want to see thousands more Iraqi civilians killed, starved or maimed. I pray they will prevail against their leadership in time. As for Canada, if we participate in this war, I will be truly ashamed of my country.

Something has to be done to depose the despots. The civilized world must protect itself from the demented who seek to destroy it. So, President Bush, your heart is pointed in the right direction. Something has to be done sooner than later. But if there is anyway to depose the despots without harming the innocent, you owe it to the American people and the rest of the world to explore those possibilities. May God grant you the wisdom to find the way. Michael S. Deverett, Toronto

The trouble with being rural

I was in the retail firearms business for 19 years and have never dealt with a more lawabiding group of people than my customers, either before or since (“Gun this system down,” Column, Jan. 27). Yes, some of them chewed tobacco, wore suspenders and went hunting. But they were salt of the earth, and definitely not criminal.

Yes, the process of registration was dreadful. Planned in ignorance of the real world, it succumbed to the congenital civil service bureaucracy. But let’s stop a minute. Firearms registration was neither intended nor expected to have any immediate impact on the criminal use of imported guns. This will take a generation at the very least and registration of private firearms is a sensible beginning for controlling needless deaths by gunshot. It will take years, but it must be completed.

It’s in the luft, silly

In describing Montreal, Will Ferguson (“City ofVignettes,” Jan. 27) makes his simplistic backwoods background loud and clear. Any travel writer worth his salt knows that the best way to visit a place is to walk through it, and talk to its people. A city, any city, is

more than a juxtaposition of streets and buildings. The real Montreal, like so many other places of interest, resides in a feeling, something neither tangible nor visible, in something called lu ft, as John Ralston Saul penned it. Yet, the cracks in the walls of the City of Sin are all that seem to catch the eye of Ferguson, obsessed with the city’s awkward urban planning. There is more to Montreal than meets the eye and, yes, it always talks back, though not everyone can listen. Gustav Kross, Montreal

Montreal has no discernable skyline and not much of a shape? What kind of drivel is that?

I, for one, could in a flash recognize Montreal in photographs: its wonderful Mount Royal bearing the cross on its eastern tip, the old port as seen biking from the Habitat, the Basilique Notre-Dame, the Oratoire Saint-Joseph and the École Vincent D’Indy as seen coming down from the Laurentians. All immediately recognizable! Montreal is indeed beautiful from its myriad angles, making it a very distinguished and distinctive city to view.

The idea of a curse on the B.C. premiership is laughable (“It’s always something,” Essay, Jan. 27), especially in this instance. Gordon Campbell made a conscious (albeit intoxicated) decision to hit the road drunk; no mystical voodoo forces were at work to make him do so. The real curse—having an unethical, hypocritical leader who has attempted on several occasions to downplay his crime—is now on the people of B.C. Only they have the power to counteract it, by calling for his resignation.

A built-in curse? Someone who makes conscious decisions to drink excessively and then to endanger lives by driving is not under a curse. If only for the sake of those of us who have lost loved ones to drunk drivers, don’t pretend that politicians who choose to commit crimes have simply happened upon positions imbued with elusive, iniquitous forces that rule their behaviour.

Heroes” (Mansbridge on the Record, Jan. 27) he is way off base. Our Joint Task Force 2 stories can be told only when it’s safe to tell them: when lives aren’t at risk. Desperate for inspirational and heroic stories? Stick to those that cannot compromise our international objectives. Where our covert heroes are concerned, when the media and the public need to know, we’ll be told. Let the next generation report on the JTF2 exploits in the Middle East conflict after our Canadian heroes are out of harm’s way.

There is a difference between the more conventional warfare of the First and Second World Wars and that of today. Units involved in the campaign against terrorism, such as our counterterrorism unit, JTF2, are subject to strict operational security safeguards to protect the unit and its members from the disclosure of information that could be used against them. Your piece fails to recognize that in those areas where security sensitivities do not exist, the Canadian Forces has an open policy regarding interviews and much information can easily be accessed on-line at www.forces.gc.ca.

After reading Michelle Mulder’s (“In an arctic library,” Over to You, Jan 20), we wanted to respond with the students’ point of view. Ms. Mulder says racial tensions still exist in

our classrooms with the largely white teaching staff, however she must not have understood the closeness of our relationships with our teachers. As we have a small school, we spend more quality one-on-one time with our teachers. Students feel comfortable phoning or visiting teachers at home; we call our teachers by their first names. Students and teachers joke with each other. As students we often ask teachers, “Have you become an Inuk?” and teachers might ask us, “Were you born in an igloo?” This joking happens regularly, and we are very proud of our bonding and friendship with our teachers. It would be nice to see articles in your national magazine that truly reflect communities like ours.

Much as I enjoyed reading Michelle Mulder’s recent article, I think that there are factual problems with her presentation of life here. My experience, now almost three years, is that our high school staff works tirelessly with and has a great relationship with our students—there is no racial tension here. Keith Parker, Principal Kugluktuk High School

For the love of Avril

In response to the many letters criticizing the amount of coverage you gave Avril Lavigne (“A matter of taste,” The Mail, Jan. 27), I want to say that as a 35-year-old mother of one huge Avril fan, it is extremely important to understand who our children are listening to and idolizing. Taking care of and understanding family members is as important as learning about the lack of seniors’ low-cost housing or prisoners of war.

As a 30-plus female who is deeply proud of the great, young Canadian talent that this country has to offer, I want to remind readers that not all of us belong in the same category and generation. Yes, I am very passionate about what goes on in the world, but I am also very passionate about what is going on next door. Now, would people complain if you were to feature Paul Brandt or Rita MacNeil? I doubt it. Isn’t it refreshing to people that just for one week, we do not have to discuss George W. Bush and Iraq? Thank you Maclean’s] 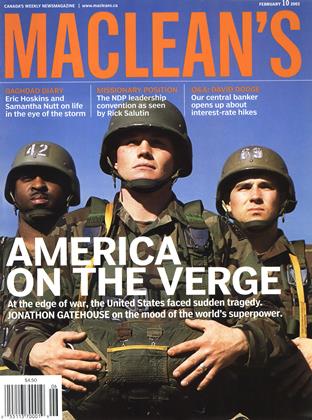