“We will be back.” That’s how Ontario Premier Ernie Eves summed up the Tower of Babel-like conclusion to last week’s first ministers’ conference. The meeting was supposed to end the incessant bickering between the provinces and Ottawa over the nation’s health-care system. Instead, it deteriorated into a hold-your-nose-and-grab-theloot affair, with no one proclaiming victory. Canada’s 10 premiers even refused to call the loot-sharing an agreement, and territorial leaders balked at signing any document, saying Canada’s North needs a special deal to accommodate its unique needs.

If there was any consensus, it was that this is Romanow-lite. Last November’s royal commission called for a three-year $15-billion cash infusion—essentially for new priorities like home care, catastrophic drug coverage, primary-care reform and upgraded equipment. Today, the best calculation is that Ottawa will spend $12 billion in new money over the next three years.

That’s $3 billion shy of Romanow. The feds will ante up more in years four and five. Their five-year total is nearly $35 billion, with $16 billion of this targeted for new priorities. The provinces, however, put Ottawa’s total contribution at closer to $27 billion and say they are getting stuck once again with costly new programs.

The provinces did agree to the creation of a new Romanow-inspired “health council” that would report on—but not compel—how funds are spent. And the new money should alleviate some of the problems of long lineups for critical and long-term care. But as Romanow himself pointed out in November, the $23.4 billion in additional money earmarked for health care in the last deal, in September 2000, has largely disappeared down medicare’s sinkhole. Without enforceable rules to ensure “new” money will go to new priorities, the first ministers will undoubtedly be back at the table. 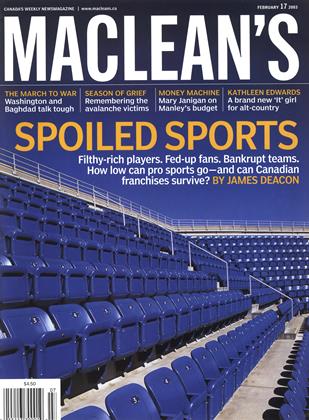