JOSCHKA FISCHER has inherited the spacious Berlin office once occupied by Erich Honecker, the sombre Communist party boss who long ruled East Germany from the Nazi-era Reichsbank building. The new tenant has turned the erstwhile, gloomy room into a postmodern workstation where he exhibits his collection of what he calls, but only in private, “diplomatic kitsch”—the variety of gifts he receives as German foreign minister. The exhibit is counterbalanced by a culturally correct Andy Warhol painting that hangs above his desk. And that, it seems, is the limit of American influence at the foreign ministry these days.

With Berlin and Paris on one side of a divided western coalition, Fischer is the independent-minded yet enigmatic man driving Germany’s contentious foreign policy. A self-described pacifist who has nonetheless given the green light to German participation in Afghanistan and Kosovo, he chaired the Security Council meeting at which UN weapons inspectors gave their latest update on Iraq in February. And he is set to play a decisive role in shaping the European Union’s future, helping determine whether Brussels will toe—or challenge—the U.S. line.

At 54, Fischer cuts a dashing figure with his silver hair and dapper suits. Undoubtedly, Joschka, as friends and foes call the minister and vice-chancellor, is well-liked. A near 80-per-cent popularity rating sets him apart from other German politicians; he is miles ahead of Chancellor Gerhard Schröder. Fischer, a Green party executive board member, in fact, saved the day for the ruling RedGreen coalition by leading his party to nine per cent of the vote in the October elections. Not bad for the son of an ethnic-German butcher from Hungary who quit Revolutionary Combat, an extreme-left faction,

to join the not-yet-mainstream Greens in 1977. A former symbol of dissent, Fischer is now an icon of national unity. “Germans see Joschka as the lost son who has returned to the fold,” says one of his biographers, journalist Mathias Geis. “When my mother sees him on TV, she is reminded of her sons and their strange ways.”

Polls show that Fischer is especially wellliked among older voters—like Geis’s mother. They apparently do not mind his murky past, when he picked fights with the police, smoked marijuana or dodged Germany’s mandatory 10-month military service. And they seem to have forgotten his most vociferous outbursts in the 1980s when he first sat in the Bundestag, Germany’s lower house of parliament (“With all due respect, Mr. Speaker, you are nothing but an asshole”).

“Everything has been forgiven because Fischer has never tried to hide his past,” says Manfred Güllner, chief pollster with Berlinbased Forsa. In 2001, when Stem, the Hamburg weekly, ran a 28-year-old picture of Fischer hitting a policeman, the minister briefly considered resigning. Instead, he apologized to the police union and phoned the victim, Rainer Marx, to say he was sorry. And German public opinion, it seems, turned the page.

The high-school dropout has shown extraordinary willpower, the kind of resolve that allowed him to shed 70 lb. when he started to exercise after separating from his third wife. He is often commended for his intelligence, humour and skills as a public speaker. “He’s just as good in parliament as he is on talk shows,” says Michael Kreile, a Humboldt University political scientist. “He’s a political animal who has managed to pull off his transformation from protestor to politician.” Adds Andreas Schockenhoff, a Chris-

tian Democratic Union member of the Bundestag: “He’s a man of strong beliefs.”

But which ones? Analysts agree that Fischer is a man of conviction on two key issues: Germany’s collective responsibility for the Holocaust, and European Union reform. Fischer has declared he will always be “a grandchild of Auschwitz,” underscoring the importance of an issue that remains at the centre of German public life. And he has been a fiery exponent of European integration and federalism, suggesting in private, according to one source, that Brussels could one day stand up to Washington. On virtu-

ally every other topic, however, it’s hard to tell what Fischer really thinks, says Geis. After Sept. 11, for example, Fischer said that a German-U.S. rapprochement was the only answer to terrorism. But then, during last October’s election campaign, he insisted Berlin shouldn’t take part in any military operations in Iraq, arguing instead that an EU alternative had to be found. More recently, he has been instrumental in putting together the joint German-French proposal calling for stepped-up UN inspections in Iraq. On the topic of war, his attitude is now summed up in his recent riposte to U.S. De-

Geis sees Fischer as a mafioso-type figure, both seductive and threatening. “In his presence, you immediately understand that this man uses his power to get power.” Although popular, he is said to have few friends. “People who don’t know him like him, and people who do know him dislike him,” quips pollster Güllner. Some criticize the minister for being a Staatsschauspieler (state comedian), implying that he overacts in his role as a politician.

Critics charge he has used the Green party as a vehicle for his own personal agenda. True or not, it wasn’t a minor undertaking. “The Green party and authority don’t mix,” explains Kreile. “Yet, Fischer can sway it as he wishes.” An emotional debate raged within Green party ranks in 1999 over German involvement in Kosovo, which Fischer successfully defended. That allowed the most important deployment of German troops— about 5,000 soldiers—outside German borders since the Second World War.

Controversy flared again in the aftermath of Sept. 11 over Germany’s contribution to the international coalition in Afghanistan. Schröder tabled a motion of confidence in the Bundestag—a rare procedure used only four times since the end of the Second World War—that hinged on Green support. Fischer argued that a military intervention would not resolve anything in itself, but was nonetheless a necessary first step. He insisted that the destruction of the World Trade Center bode ill for Green party ideals, “ft was an attack on one of the most multicultural cities in the world, a symbol of the ‘open society’ in which we believe,” observes Reinhard Bütikofer, a top-ranking party official, echoing Fischer’s stance. In the end,

only four Green parliamentarians voted against the motion, allowing the ruling coalition to win by a 10-vote margin (336 to 326).

Ulrike Guérot, a political scientist with the German Council on Foreign Relations, says Fischer understands the importance of nuances—unlike Schröder, who is on the record as saying he will “never” join the Americans in Iraq, which caused a furor in Washington. Fischer was dispatched to the U.S. in November to patch things up, but was given the cold shoulder by President Bush and National Security Adviser Condoleezza Rice, who refused to meet him.

Ironically, the diplomatic rift comes when Germany has joint command of the UN peacekeeping force in Afghanistan, until August. More than 1,000 German soldiers are participating in Enduring Freedom, the ongoing U.S.-led anti-Taliban operation. And more than 900 German troops have been guarding American installations in Germany since January to free up U.S. forces being transferred to the Gulf.

This balancing act between Germany’s willingness to help its American allies and its reluctance to engage in combat resembles Fischer himself, a man who dropped out of school at age 15 out of sheer boredom. He told Geis, his biographer, that he still felt bitter about the teachers who had underestimated his potential. “What a career I could have had!” he exclaimed. “And what career could this have been exactly?” asked the journalist, who could not fathom what loftier occupation the minister pined for. Fischer just grinned. Now, with the West divided over Iraq, Fischer has perhaps found a challenge worthy of a gifted boy.

Michel Arseneault, a Canadian journalist based in Paris, is a regular contributor to Maclean’s sister publication L’actualité. 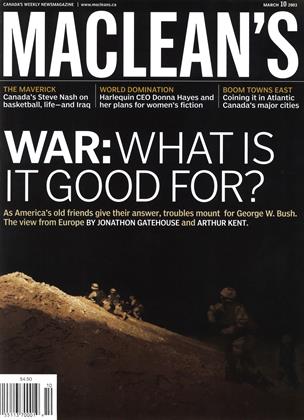