IT’S NOT EVERY DAY that a grown man’s bubble bursts so emphatically. “There’s no pressure,” says Dave James, a childhood friend, when I ask about sitting in with his 22-piece, Halifax-based orchestra, the Chebucto Big Band. “ If you want to play a note, go ahead. If you don’t, just sit there.” After years of bleating away on my grandfather’s alto saxophone alone in the basement, I harboured the delusion that I might be able to hold my own with the Chebucto. And James, the band’s musical director, had used the word “unintimidating” to describe the weekly rehearsals. Which might be true if you’ve played the drums with Zoot Sims, Moe Kofiffnan and a host of other jazz greats, as he has. But when Bye Bye Blackbird is your signature tune ... well, let’s just say

spending a couple of hours trying to keep up with a swinging jazz orchestra can be a shattering experience.

The charts looked like ancient Hittite. The tempo was so brisk it induced vertigo. At times, as the others breezed through tune after tune, I just took the reed out of my mouth and sat there dazed. And now here was my old buddy—for all I knew still smart-

The charts looked like ancient Hittite. The tempo induced vertigo. At times,

I took the reed out of my mouth and sat there dazed.

ing from some long-forgotten playground affront—signalling me to solo for a few bars in the middle of Rock Around the Clock.

Was that the particular moment when I realized the folly of picking up an instrument latish in life? Not by a long shot. That could have been years earlier, when I was living in Toronto, and my next-door neighbours applauded through the wall when I finally managed to hit a tinny high C. Perhaps it was sitting in the waiting room before my lesson began at the Canadian Conservatory of Music in Halifax and noticing that I was two feet taller than any of the elementary school-aged kids gathered there. It could have been the moment I was caught practising scales in my car in the parking lot at a beach in Prince Edward Island in the middle of winter. Or any number of times when someone secretly walked into the room and witnessed me—a married father with responsibilities—eyes closed, moving my shoulders as languidly as Charlie Parker on heroin, as I stumbled through Row, Row, Row Your Boat or some other equally challenging number.

Yes, deciding to learn a musical instrument as an adult can be such a humbling experience that it’s surprising people do it at all. Yet, they do. There are some practical reasons. Trying to work your way through a Chopin étude on the piano will help fend off Alzheimer’s disease, or so we’re told. Want your kid to headline Carnegie Hall some day? According to the popular Suzuki method, if a parent plays an instrument first, it will arouse the child’s natural desire to copy mom or dad. But there’s more to it than that, something to do with the sheer joy of music. How else to explain the fact that among my circle of acquaintances, there’s an entrepreneur who recently picked up the French horn after a 20-year hiatus, a plumber who has started pounding polkas on the accordion, and a sports broadcaster teaching himself to play old Eagles numbers on the piano. I know a lawyer who plays Cape Breton-style keyboard, an investment manager who likes to pick Mississippi Delta blues on his acoustic guitar, and an abstemious, Gemini-winning television writer and producer who got so nervous before her weekly piano lesson that she’d down a mid-afternoon glass of wine.

Since my wife spruced up my late grandfather’s alto and gave it to me for Christmas 15 years ago, I’ve taken lessons on and off from six different teachers in three different cities. I have to say I don’t envy them. Yet the thing is, even though I sometimes wonder if all the studying and practising have been worth it, I can’t imagine giving up the sax. I like everything about it: the feel of my fingers on the worn-down keys, the way my entire head vibrates when I play in the lower register. I particularly like the way blowing the thing tends to focus the mind—to reduce all of life’s worries to the act of trying to force tolerable sound through a couple of feet of shiny metal. It’s only lately that I’ve made any discernible headway. The person responsible, 32-year-old Trevor Dimoff, a composer and sax player who teaches at Dalhousie University, tells me not to worry about my glacial progress. “It’s harder when you’re older,” he asserts. “Biologically, kids have an advantage: when puberty hits there’s a growth spurt in their brains and they start building synapses faster.”

It may be tougher to get it when you’re older, but it’s not impossible. And if you already learned when you were young, you don’t necessarily lose your chops when you get to a certain age. All that’s apparent most Mondays at 6.30 p.m., when members of the Chebucto Big Band straggle into St. Matthew’s Church in downtown Halifax. It’s a diverse lot—doctors, lawyers, teachers, university professors, a government bureaucrat, some retirees, a software consultant, a waitress—with an average age somewhere in the late 40s. At 49, Rob Sanford, a real estate agent who joined three years ago, is one of the newest. But he’s no rookie: Back in the 1970s he played trombone in a Halifax-based R & B group and even tried to make it as a musician in Los Angeles before quitting altogether. One day in 1999, he picked up a trumpet on a whim. Now he’s one of the mainstays in the band’s trumpet section. “For me, playing the trumpet is right up there after sex,” says Sanford. “Right now, actually, they’re probably about dead even.”

Alan Mclver, 63, a retired marine biologist who plays saxophone, joined seven years ago for the camaraderie and to improve his sight-reading skills. What a revelation it was, then, to discover that playing music also unlocked an untapped creative side. Along with the band, he also plays in his church or-

I like everything about it: the feel of my fingers on the worn-down keys, the way my head vibrates when I play in the lower register

chestra, paints and writes poetry, and is planning to both write and illustrate a children’s book. “Life is short,” he says. “Music feeds the soul.”

Even if, at times, it can make the stomach churn. To me, improvisation—the making of instant melody—is the magic of jazz. And when the solos start there’s no place to hide, even in the biggest band. “Dave has given us all motivation to try to put some of ourselves in the music,” says George Davis, 51, a plastic surgeon, who unleashes a smooth, spontaneous 32 bars of Basie, Straight Ahead on the tenor sax when his moment comes. The next time a solo rolls around, others put up their hands like schoolchildren, eager for a chance to show their stuff. But not everybody likes to be in the spotlight. Linda

Rix, a 57-year-old mother of two who couldn’t play a note on the bass when she joined the band 11 years ago, tries to ignore James when he calls her name. Eventually she complies, slapping a chorus of That’s Amore smack dab in the middle of Miles Davis’s All Blues to James’s obvious approval. “I don’t like improvising,” she concedes afterwards. “I know it’s good for me musically but I just can’t get used to it.”

I grimace when he points at me, too. I’m not really nervous, which is weird since my fingers normally go spastic when someone listens to me play. So I just start honking away the best I can. My left foot pounds the floor like Stompin’ Tom. Notes somehow emerge, childlike by the standards of everyone else in the room. But I’ve played worse— a whole lot worse, actually. When my eight bars are up, I don’t even notice and just keep careening on as the rest of the band kicks back in. Mclver, whom I’m seated next to, waves a friendly hand to quiet me down. I grin, embarrassed. But I’m already thinking about the next solo, whenever it might come. The old basement is just never going to feel quite the same again. I?] 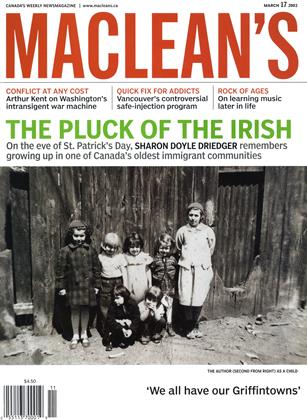