COMPLEXITY IS NOT ONLY a reality in such daily activities as working through software or negotiating automated telephone prompts. It is also a regular, compelling part of foreign policy reality—and the issue of confronting evil. That, in fact, is what many might argue France, Germany and Russia are suggesting in terms of the present Iraqi regime. Preventing the greater evil of war is what proponents of an American military stand-down—such as those countries—argue matters most. But there is no easy way out of this dialectic, for either side.

Innocent people die in Iraq every day because Saddam Hussein’s government manages UN-imposed sanctions in a way that hurts the disadvantaged and children first. Repression, secret police, mass arrests, torture and murder are commonplace. Iraq awards money to the families of suicide bombers in a way that constitutes more than compensation for the bereaved; it’s an incentive payment for those who will kill as many Israeli civilians as possible. So there is real evil in Iraq, not reflective of its people, but of a dictatorship that smothers consideration of their interests or will.

War, no matter how high-tech the weaponry or how carefully the campaign is conducted, condemns non-combatants to die. That may happen because they live near a target of military necessity; or because Iraq’s government may gas and attack its own people, as it has in the past; or Iraqis may die simply because of the ever-present, unavoidable confusion of war. Without war, we have the assured oppression and murder of many innocent Iraqis. With war, innocent Iraqis die nonetheless.

If the Bush White House has failed to convince the world of the logic of its argument for war—Iraq’s connections to al-Qaeda and the events of Sept. 11 seem vague at best— it has not failed the tests of sincerity or intent. The call for “regime change” in Iraq clearly means more than this regime, at this time, in that country. When Jean Chrétien rightly asks, “Who is next?” the implicit re-

sponse from the Bush administration is clear: that the end of one despotic, cruel and malevolent regime should send a signal to those who have no interest or passing interest in democracy, and that the time for dithering has passed.

But proponents of democracy have to be frank about the results that any widespread introduction of a real democratic process might bring across the Mideast: they include serious threats to the Saudi, Jordanian and Egyptian regimes that have been supportive of U.S.-led efforts in recent years. They’re among the few governments in the region with any moderate views, so real democratic change might produce real threats to these more moderate and friendly nations in the region. It’s the classic moral dilemma—does the damage done in attacking one horrific evil overwhelm the benefits that eradicating that evil may bring?

The French argument against war on Iraq is, when you come down to it, a conservative one: it amounts to accommodating evil by addressing it slowly and defanging it over time. The American position is more radical: it suggests that if you accommodate evil because of the risks of confronting it, you legitimize that evil even as you abandon its victims of the past, present and future. For those without direct interests in the region, the history of each country’s involvement in and with Iraq doesn’t make deciphering the present complexity any easier. It tends to layer it with paternity and issue ancestry, which could confound any moral case for either the French or the Americans.

For those who believe that any war for any purpose is wrong, morality only exists

With or without war, innocent Iraqis will die, whether from government oppression and murder or the confusion of combat

on one side. But if you believe that international norms, institutions and goodwill are enough in themelves to make a military response to some evils utterly obsolete, you’re replacing analysis with prayer. The risk of military response helped end the Cold War, and sadly it now must be invoked more regularly as a result of the end of the twin polarity of Eastern and Western bloc. We’ve already seen this in the Balkans. The new multipolarity of ethnic and identity conflicts, the absence of an overarching leftright framework, and the dilution of the central purposes of old alliances are among the things that make this such a fascinating time in history. The real risk is that the exigencies of realpolitik make the salience of evil and morality a little too unmanageable and inconvenient. In a real way, this debate about Iraq is about means, not purpose.

But in the same way that the medium became the message, thanks to Marshall McLuhan, the means may become the morality in our day and age. If we were to believe that appropriate means must always exclude the military option, and that the United Nations has become a body devoid of any core morality, focused only on established sovereignties and appropriate means, it would be abdicating the moral high ground with which Lester Pearson and others invested the institution decades ago. While the present divisions between the founding nations of the UN may be spurring that abdication, the fact that it has happened presents a huge challenge for the core pillars of Canadian foreign policy.

If the United States, the U.K., and most of NATO—excluding Belgium, France and Germany—chose to form a new alliance that sought to be more focused and precise, or if the Americans had a presidential election campaign in which the option of withdrawing from the UN were put on the table, Canada would face stark choices that cut to the core of our values.

A Canadian prime minister urging the Americans to claim victory in Iraq, and then to move on—as Jean Chrétien has donemakes immense sense in this context, and very much reflects Canada’s traditional diplomatic interests. Things may not, however, be that simple. lifi 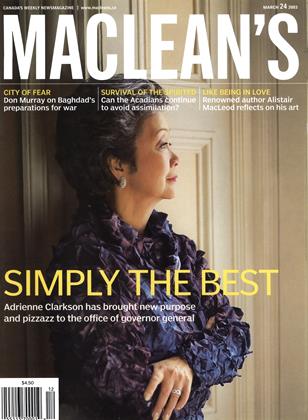