NOBODY quite knows what happens to a whale when it encounters a sound blast from a ship doing a seismic survey for oil and gas beneath the ocean floor. But in 2000, several whales beached themselves in the Bahamas after apparently suffering ear hemorrhages from military sonar, which also uses undersea sound waves. Last October, a U.S. judge halted scientific seismic sounding in the Gulf of California after two whales died in the area. “One possibility is that they get disoriented, beach themselves and die,” says Hal Whitehead, a marine biologist at Halifax’s Dalhousie University. “But in extreme cases the sound could actually kill them by damaging their ears or brains.” Which explains why he’s so upset that, by May, sound waves from seismic survey ships could start bombarding the ocean not far from an underwater canyon off Nova Scotia where northern botdenose whales make their home. “The problem here is that whales’ lives are at stake,” says Whitehead, who’s been studying that population for 14 years.

By unfortunate coincidence, Whitehead would otherwise have been getting ready to celebrate. After five years of promises, the Department of Fisheries and Oceans says it is just months—and a few bureaucrats’ signatures—away from making that underwater canyon, the Sable Gully 200 km southeast of Halifax, Canada’s flagship Marine Protected Area (MPA). Skeptical scientists and environmentalists have heard three consecutive federal fisheries ministers say the same, many times. But at least seismic work has already been forbidden within the proposed MPA. And now even the most cynical environmentalists think Ottawa is finally about to officially protect the underwater trench the size of the Grand Canyon, home to everything from rare dolphins and 1,000year-old corals to some 130 northern bottlenose whales.

But for now, Whitehead is fixated on what may be about to happen just outside that designated MPA. Marathon Canada Ltd. is seeking approval to start compiling seismic

data in early May in an area that comes within three kilometres of the proposed Gully buffer zone. Some environmentalists are interpreting Marathon’s plan as a sign that the oil companies, regulators and DFO are losing sight of their commitment to safeguard the northern bottlenose, already designated as endangered by scientists involved in the Committee on the Status of Endangered Wildlife in Canada. “The clock is ticking,” says Robert Rangeley, director of World Wildlife Fund Canada’s Atlantic marine program. “If whales start washing up on Sable Island, people are going to wonder why.” At issue is whether Marathon may get approval for exploration before an effective research and monitoring program to ensure the whales’ safety is in place. The oil company huddled with DFO, the Canada-Nova Scotia Offshore Petroleum Board and scientists, including Whitehead, to devise measures to protect the marine mammals and learn more about the impact that seismic survey blasts have on whale populations. But so far, only one project, to monitor how the sound travels through deep water, has gone beyond draft form. On its own, that’s “totally inadequate,” says Whitehead, who doubts that

the other programs—including studies of how whales actually react to the noise—will be ready to go by the time Marathon’s survey starts. “They promise to do a lot of things,” he says, “and then when push comes to shove the ecological side gets dumped.”

Marathon, which says the seismic ship will sail no closer than 25 km from the Gully’s greatest concentration of whales, feels it is taking appropriate steps. The sound waves will stop if observers spot whales within half a kilometre. The project will use a process that builds up the sound energy slowly, giving whales plenty of time to move farther away. “We feel we’re being highly responsible and respectful of what we know is a special place,” says Doug Hollett, Marathon’s Halifax-based area manager.

Ultimately that will be judged by the offshore petroleum board. Spokesperson Barbara Pike says it will look closely at Marathon’s environmental safeguards in deciding whether to approve its seismic exploration plans. At this point, she says Marathon has gone well beyond what the board normally sees in terms of environmental protection. But the critics wonder if the board is in any position to get tough with Marathon in the wake of commercial setbacks in the Nova Scotia offshore, including EnCana Corp.’s recent decision to halt development of a natural gas field. Other companies, meanwhile, are ready to adjust their exploration plans according to how the board rules on Marathon. “They’re lining up,” says Whitehead. And the racket surrounding the Gully is as loud as ever. 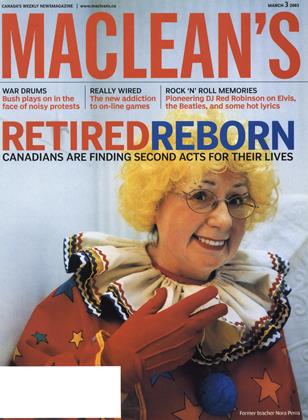