IT’S DIFFICULT TO IMAGINE why any country would want to tangle with the United States military—assuming it had a choice. Since the 1991 Gulf War, the U.S. has continued to invest hundreds of billions of dollars annually to ensure its arsenal is stocked with enough high-tech weapons for it to remain the world’s sole superpower. Iraq, on the other hand, has endured years of economically devastating trade sanctions, and its military hardware is poorly maintained.

War is a dirty business, no matter how smart the bombs. Human error kills friendlies, the best equipment sometimes underperforms, and computerized weapons and navigation systems can crash like desktop PCs. But to a confident Bush administration, attacking Iraq may seem like a video game-shooting pixilated fish in a barrelbecause of America’s awesome arsenal. Here’s some of what the U.S. can unleash:

1 B-2 STEALTH BOMBER The U.S. can use these radar-avoiding aircraft to drop smart bombs on Iraqi air defences and communications systems.

2 PACKBOTS They look like something you might buy at Radio Shack. In fact, PackBots are remotecontrolled, intelligence-gathering robots for use in urban warfare, in areas that are inaccessible or too dangerous for soldiers. Tracked “flippers” enable PackBots to climb stairs, as well as right themselves if they flip over. Payloads include cameras, microphones, sonar, infrared sensors, inclinometers and laser scanners.

4 GLOBAL HAWK This unmanned aircraft cruises at 65,000 feet and has a range of more than halfway around the world. The Global Hawk’s reconnaissance missions provide high-resolution, near real-time images of large geographic areas.

5 CRUISE MISSILES CARRYING DIRECTEDENERGY WARHEADS Advances in battery and capacitor technology permit large amounts of electrical energy to be stored and released in a sudden burst-described by some as a man-made lightning bolt-that fries the microchips in computers, communications equipment and other electronics.

6 THE SHADOW Another drone, the Shadow transmits video images of tactical targets. It’s small-the wingspan is only four metres-and it can be trucked around. It comes with its own launcher.

7 JOINT DIRECT ATTACK MUNITION, OR JDAM This guidance system resembles a metal girdle that wraps snuggly around a “dumb” bomb to convert it into an accurately guided “smart” weapon.

8 NIGHT VISION American soldiers are unsurpassed in large-scale ground combat that relies on night-vision goggles. U.S. military units can mount assaults under the cover of darkness to exploit this advantage, as well as to escape the desert’s punishing heat.

9 FORCE XXI BATTLE COMMAND BRIGADE AND BELOW (FBCB2) Essentially a hopped-up laptop that replaces paper maps and voice communications over radio on the battlefield. FBCB2 software and hardware provide soldiers with detailed pictures of their surroundings, including icons for tanks and trucks on a digital map. Orders are sent by secure e-mail.

10 PREDATOR DRONE The U.S. is using unmanned combat air vehicles, or UCAVs, for a variety of missions. The CIA employed the Predator last November in the assassination of terrorist Abu Ali in Yemen. Via remote control, the Predator launched a Hellfire missile that killed Ali, suspected of masterminding the October 2000 attack on the USS Cole that killed 17 U.S. sailors. 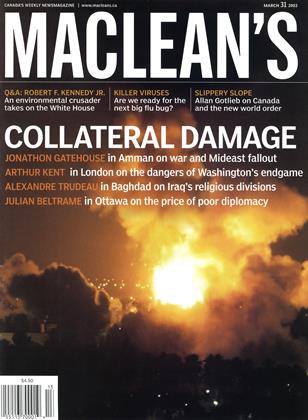