WITH A HEARTY LAUGH, Canmore Mayor Glen Craig recalls “the good old days.” Thirty years ago, Canmore was a tiny mining community on the eastern outskirts of Banff National Park—little more than a pit stop for motorists headed for the tourist meccas of Banff, Lake Louise and Jasper. “The basic business section was four restaurants and four gas stations along the highway,” says Craig. “My family owned two of each plus two convenience stores. I sold a lot of gas and potato chips, let me tell you.”

Ah, how times change. The Canmore coal mine closed for good in 1979, and for a time it looked like the town might wither away. But then a funny thing happened. With Ottawa clamping down on new development within national parks, people have started looking for other places to enjoy the splendour of the Canadian Rockies. Starting about a decade ago, Canmore experienced a construction boom in new houses and condominiums, many of which serve as weekend residences for Calgarians, who live just an hour’s drive away. Now, Canmore is becoming a tourist destination in its own right. Seven new hotels and two first-class golf courses have opened over the past five years, and a host of other high-end resorts and residential developments are just starting to come on stream.

The mayor points out that the community’s determination to preserve wildlife corridors in the valley resulted in the area’s biggest development project, the Three Sisters Mountain Village, being scaled back. Even so, the planned all-season resort, named for the trio of peaks looming over the southeastern

edge of Canmore, is massive. To be phased in over the next eight to 10 years, the “village” will include 3,500 residential units, two golf courses, a full-service spa and 1,650 hotel rooms. Many of the luxury homes are being gobbled up by Americans and Europeans, including one a British couple recendy purchased, sight unseen, for $950,000.

The central lure of Canmore is location, location, location. Surrounded by imposing peaks, the town boasts a skyline even more impressive than that of neighbouring Banff. Canmore also sits on the doorstep of Kananaskis Country, a 4,000-sq.-km network of provincial parks and protected areas containing some of the most accessible, yet largely unspoiled, Rocky Mountain backcountry around. “We’re surrounded by wilderness and all it offers,” boasts Craig. “It’s a paradise, really.”

it offers spacious rooms, a wooded setting and fabulous views. 877-335-8800 www. marriottresidenceinncanmore. com m HOWARD JOHNSON HOTEL A good choice for budget-conscious families, it has a pool and three-storey waterslide.

Cypress Hills, Sask. Bumps and beauty on the Prairies

FOR THOSE who still think of the Prairies as flat and desolate, this one’s for you. The Cypress Hills of southwestern Saskatchewan and southeastern Alberta rise 600 m above the surrounding plains, forming the highest point of land between Labrador and the Canadian Rockies. Here, moose, elk and deer move among towering forests of lodgepole pine and white spruce, while lookouts like the aptly named Bald Butte offer breathtaking views of grasslands rolling as far as the eye can see. There is even that ultimate Prairie oasis: small, pristine lakes with sandy beaches.

Linked by an interprovincial park, the Cypress Hills are just a half-hour drive south of the Trans-Canada Highway. Yet millions skirt by obliviously on their way to or from the tourist magnet that is the Rockies. That’s starting to change. Brad Mason, manager for the more developed Saskatchewan side of the park, says an FM signal advertising the charms of the hill country lured thousands last summer. And tourist traffic from Alberta builds steadily each year, now accounting for more than a third of all visits. The area attracts mainly families, drawn by the campsites and kid-friendly amenities. “There are people who want something not as commercialized as the mountains,” notes Mason.

“They find that here.”

■ CYPRESS PARK RESORT INN About 30 km south of Maple Creek, Sask., it’s pretty much the only game in town-with affordable cabins and hotel rooms, and more modern condominium units. 306-662-4477 www.cypressresortinn.com WHERE TO EAT 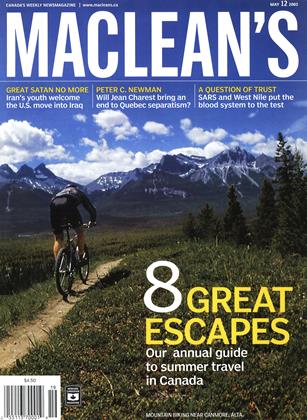