Murray Lightburn, the vocalist and composer behind Montreal rock sextet the Dears, likes to joke that his band’s second album is a musical homage to Apocalypse Now. Released in mid-April, No Cities Left wasn’t as crippling to produce as the notoriously expensive Coppola film, but it was a trial nonetheless. “The recording was excessive,’’ Lightburn admits. “Subconsciously I felt I had a lot to prove.” The band spent half of 2002 in the studio, working with a platoon of musicians and recording about 500 takes for each of the 12 lush, orchestral tracks. Besides the Dears properNatalia Yanchak, Martin Pelland, George Donoso III, Robert Benvie and Valerie Jodoin-Keaton, as well as Lightburn-the album features, among others, their label-mate Sam Roberts, on violin. Lightburn says doing it his way was arduous but necessary. “We didn’t choose this life,” the perfectionist-who says he’s in his “dirty 30s”-notes dryly. “This life chose us."

Audiences, too, are choosing the Dears, who have sold 2,000 copies of the CD since its April 15 release. For a band that quite literally hammered its last record together, self-releasing 500 copies of the critically vaunted Protest EP in steel sleeves the Dears manufactured themselves, that would seem encouraging. But Lightburn’s a wait-and-watch sort of guy. “I’ve heard us called ‘the next big thing’ a few times. I’ll believe it when I see it. One day you’re signing

photographs and the next day you can’t get the teller’s attention at the bank because to them you’re just somebody with no money.”

That caution fits with the ethos of the Dears’ record label. MapleMusic Recordings describes itself as a safe teething ground for Canada’s new stars. Although the company is financed in part by Universal Music Canada, MapleMusic retains its creative and financial independence. It’s able to do so partly because the label is a wing of MapleCore, which also includes an Internet magazine (UmbrellaMusic.com), an Internet solutions company, and MapleMusic.com, a Canadian music site. “At Maple,” says CEO Grant Dexter, “we’re not going to look at the bottom line and, if it’s bad, say, ‘That’s it, you’ve had your one shot.’ ” The upstart label offers musicians lower advances than the majors, but a higher share of profits. Dexter says artists like Roberts, Kathleen Edwards and Tragically Hip front man Gord Downie, whose Maple solo record will drop in June, are drawn to the company because it complements the spirit of their work. “I know I’m idealistic,” says Lightburn, “but this is a model that works because it’s about a relationship between people.” 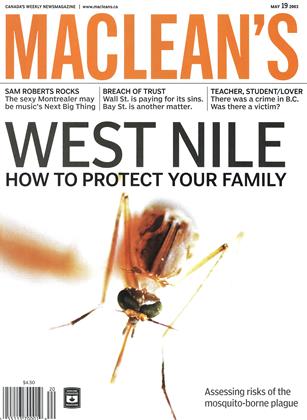