WHEN HAWKS SOAR JULIAN BELTRAME May 5 2003

IF YOU WANT to enter the heart of American triumphalism, there are few better places than Norfolk, Va. Headquarters for the U.S. Atlantic Fleet, the town is little more than clusters of modest suburban bungalows, strip malls, fast-food joints and a surprising number of pawn shops, all wedged between and around the world’s largest naval complex. Norfolk is proud of its armed forces these days. American flags are posted everywhere the eye turns—on car antennas, in front of homes, in storefronts, on the roofs of restaurants and bowling alleys. Motorists are constantly bombarded by signs asking them to “Support our Troops,” or declaring “God Bless America.”

At the Dockside Bar and Grill, just a stone’s throw from the base, it’s pretty easy to bring the conversation around to the Iraq campaign. At first, the four baby-faced sailors standing by the bar caution that they are not permitted to talk to reporters about the war or politics. But they can’t help themselves. “Nobody can stand up to us,” says one, wearing a stick-on name tag with “Dave” scrawled on it. “Our navy, our air force, our smart bombs, there’s no defence. To tell you the truth, I’m surprised it took three weeks.” Greg, starting to feel the effects of three Budweisers, tries to make himself heard over the Georgia Satellites blaring from loudspeakers. “I’m right behind Bush,” he shouts. “Clinton wouldn’t have had the guts to do this.” The others nod in agreement. “If the President said, tomorrow we’re going after Syria or Korea,” says one, “there’s not one per cent in the military that would be against it.” Bravado from fighting men is hardly a barometer of the national mood. But there is a strut in America’s stride these days and a growing belief that it can remake the world in its own image. The doves are in retreat, keeping their heads down or reduced to writing columns—likes Nicholas D. Kristof in the New York Times last week—trying to explain why all their fears didn’t pan out. Their warnings that winning the peace will prove more difficult than winning the war,

Meanwhile, the hawks are flying high. At the White House, spokesman Ari Fleischer almost routinely issues veiled new threats. First on the list was Syria, accused of harbouring fleeing Iraqi Baath party officials, storing Iraqi chemical and biological weapons, and supplying military equipment to its neighbour during the war. But George W. Bush subsequently turned down the heat, saying Syria was showing new signs of co-operation. But the message—“Don’t mess with us”—had been delivered, and likely received.

Last week, Iran, an original member of Bush’s axis of evil, also appeared on Fleischer’s radar screen. Responding to reports that Iranian agents had infiltrated Iraq and were stirring up the Shia population to push for a fundamentalist Islamic state—the mother of all fears inside the administration—Fleischer told reporters that the Iranians had been told to stop. “We have made it clear to Iran,” he said, “that we oppose outside interference in Iraq’s road to democracy.”

So what is the Bush administration up to? The answer may lie in the publications of an increasingly influential group of neo-conservatives associated with the messianicsounding Project for the New American Century. The Washington-based think-tank was founded in 1997 to pursue the goal of spreading U.S. influence across the globe, through diplomatic means where possible, with military force if necessary. It urged the government to move militarily against Saddam Hussein and flex its muscles against other rogue states, arguing that as the sole superpower, America has a unique historical opportunity to reshape the world. But more than that, it also has a duty, according to the Project’s statement of principles, to “accept responsibility in preserving and extending an international order friendly to our security, our prosperity and our principles.”

tration. The Project’s original members included such right-wing Republican heavy hitters as Dick Cheney, who would become Bush’s vice president, Jeb Bush, the President’s brother, Donald Rumsfeld, who would become secretary of defense, and Paul Wolfowitz, his deputy, along with a few dozen conservative analysts, political advisers and activists. Even so, says Thomas Donnelly, a fellow with the ultra-conservative American Enterprise Institute and the principal author of one of the Project’s key papers, “Rebuilding America’s Defenses: Strategy, Forces and Resources for a New Century,” it took the Sept. 11 attacks on the World Trade Center and the Pentagon for the group’s hardnosed agenda to gain favour in Washington. “These people in the Project were inside the administration arguing what they were arguing prior to Sept. 11 and they weren’t successful,” Donnelly notes. “But 9/11 was a clarifying moment for the Pres-

The Project’s agenda—including invasions of Afghanistan and Iraq, and calls for significant increases in defence spending to ensure the U.S. has the capability of winning two major wars simultaneously—has been largely adopted by Bush. But that doesn’t mean the U.S. is preparing the groundwork for another Middle East adventure, says Donnelly. “What do you think— that we’re going to go on to Damascus next? ” he mocks. But he doesn’t entirely rule it out, either. By invading Iraq, he argues, the U.S. has shown the world what it is prepared to do. “We gave Saddam a gazillion chances to change his ways and he didn’t,” he says. “So the proposition is out there. If things get worse in Syria, if they continue to support Hezbollah, if they are going to pass on weapons of mass destruction to terrorists, why should we guarantee the continued rule of the Assad family.”

This is the so-called “madman” strategy of foreign policy, says Robert Malley, a for-

mer Bill Clinton adviser on Arab-Israeli affairs. Malley, who is currently Middle East program director for the International Crisis Group, a non-partisan public policy institution in Washington, explains that “the idea is you don’t go mad, but you play mad to make your enemies nervous about what you might do.” It has already borne fruit. Some in the administration believe concern among rogue states that the U.S. has an

‘NOBODY CÂN stand up to us. Our navy, air force, smart bombs, there’s no defence.

To tell you the truth, I’m surprised it took three weeks.’

itchy trigger finger played a role in North Korea’s about-face in agreeing to last week’s negotiations with Washington on its nuclear weapons program. And administration officials say Syria, having watched how

quickly the U.S. was able to effect regime change in one Arab nation, has begun to aid the U.S. in the search for Iraqi leaders.

The problem, cautions Malley, is that fear is a poor teacher. “You can achieve a lot through threats and military power, but then it won’t be American values we export, it’ll be fear of American power.” But Malley does not believe the U.S. is going power-mad. Iraq, he says, was a special case where a number of things converged, among them concern about weapons of mass destruction, fear that Saddam could arm terrorists, and the desire among neo-conservatives to topple a repressive Arab regime as an object lesson for others. “There may be some in the administration who think Syria should be next, but I don’t see the same convergence yet,” he says. Still, there is no doubt conservatives are crowing loudest. Their ability to sway the President on Iraq, and the gung-ho mood exemplified by such towns as Norfolk, make the prospect of another U.S.-led war far less theoretical than was the case just a few months ago. [¡fl 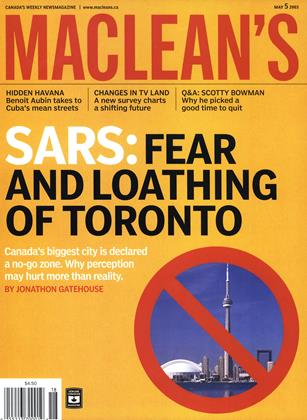