KATE GREEN, 36, recalls going to a pediatrician for regular visits when she was a child. Her own children are growing up in a new era. Instead of going to a solo doctor for regular checkups and routine care, they see Kitty Braceland, a specially trained primary health-care nurse practitioner who works in a team at the Somerset West Community Health Centre in Ottawa. “I feel in very good hands with her,” says Green. “She meets our needs as a young family of basically healthy folks.”

Braceland is part of a growing force of nurse practitioners whose extra schooling qualifies them to perform such duties as ordering lab tests, diagnosing illnesses and prescribing drugs. She has guided the Greens through the inevitable visits of a growing family: regular check-ups, vaccinations, stubborn coughs and sore throats. The Greens have also taken advantage of Somerset’s chiropodist, dietitian and physiotherapist. Only for serious health concerns do they see their family doctor at the centre. “Kitty can do 90 per cent of what we need,” says Green, “and she collaborates so well with the others, right there in the hallway.”

All across Canada, growing numbers of centres like Somerset are providing care through teams of doctors, nurses and other professionals working together. Instead of going to a single family physician for everything, patients go to a clinic where their initial contact may be with a nurse, dietitian or social worker, depending on their problem.

If necessary, they’ll be referred to the doctor. It is called collaborative care, and it is poised to sweep across the country like a tidal wave. “There’s not one jurisdiction in the country not looking at collaborative care in some way,” says Cindy Moriarty, manager of the Primary Health Care Transition Fund, an arm of Health Canada that underwrites many of those projects.

New data from the Canadian Institute for Health Information (CIHI), as well as a new poll conducted for a group of health-care professionals’ associations, provide a glimpse of where collaborative care is headed. CIHI reports that ambitious health-care planners in Newfoundland and Labrador, for instance, plan to have all residents of the province registered with a network of health-care providers by 2007. Saskatchewan wants to have 80 per cent of its physicians working in collaborative care groups by 2011. Quebec is expanding the number of family-medicine groups in which doctors work with nurses and other health-care professionals.

That’s a revolutionary shift from the current situation, where 80 per cent of us still turn to our family doctor for routine care, at least during the day. In the evenings and on weekends, when the doctor’s office is closed, we hobble to walk-in clinics and emergency departments, where care is impersonal and uncoordinated with the fam-

ily doctor’s aims. A team approach can provide access around the clock and include prevention strategies that embrace more than just physical symptoms. “It all has to work together,” says Braceland, who helps her patients or refers them to specialists who can aid them with issues such as housing, nutrition and stress.

With physician shortages becoming dire in parts of Canada, and hospitals bursting at the seams, the hope is that collaborative care will not only improve patient access at all hours, but also reduce waiting times and improve health outcomes. But for all its potential value, collaborative care is not necessarily going to lower Canada’s health spending, nor will it solve all problems.

In fact, a team approach can even make it more difficult to address something like Canada’s current health-care nightmare, SARS. “We have huge headaches getting staff to conform to our directives about screening patients and wearing masks,” says Dr. Douglas Mark, who works with six other family doctors, several nurses, a chiropractor and an acupuncturist in Toronto. As the SARS drama unfolds, he says, it takes a lot of work to keep everyone in the clinic informed and working the same way in a rapidly changing situation. “If I were a solo doctor,” says Mark, “I would decide what to do and, bang. It’s done.”

Mark uses a sports analogy. “With a hockey team, if one player doesn’t follow the plan, the play falls apart. It is easier as a singles tennis player to change your strategy.” Nevertheless, for all the extra communication collaborative care may require, it’s crystal clear that the federal government is riding the wave. “The best way to provide health care,” says federal Health Minister Anne McLellan, “is through multidisciplinary teams.”

The public agrees. According to the sixth annual Health Care in Canada survey conducted by Pollara, more than two-thirds of Canadians believe collaborative care would improve the quality of health care they receive and speed up access. Working in a partnership with 10 health-care associations and the pharmaceutical firm Merck Frosst Canada Inc., Pollara interviewed 1,200 members of the public as well as 200 each of doctors, nurses, pharmacists and health-care managers on attitudes toward health-care issues. Asked if they should be required to work in teams, at least 95 per cent of nurses,

pharmacists and health-care managers said yes. Support from doctors was more guarded, but still a solid 70 per cent. The physicians’ reserve doesn’t surprise Dr. Steve Rollheiser. He works happily in a modern collaborative health-care team in Chase, B.C., 45 minutes east of Kamloops, but he knows many physicians who distrust the team approach. “This model makes some doctors very wary,” he says. “They see it as the government trying to get more control of doctors.”

In the traditional solo practice, doctors are paid fee-for-service—they bill their provincial or territorial government a certain fee for each patient visit or procedure. This system rewards quantity, not quality, of care, says Rollheiser. “Doctors do best who see a lot of patients quickly.” Sharing patients with a nurse practitioner does not work well in a fee-for-service system, agrees Dr. Peter Hutten-Czapski, a solo family physician in Haileybury in northern Ontario. When they do the routine procedures, he adds, “the nurse practitioners are in competition for the doctors’ bread and butter.”

In collaborative care teams, care providers are usually paid a salary. “This gets us away from bean counting and allows us to be much more flexible and creative,” says Rollheiser. At the Chase Clinic, he doesn’t take

a financial hit if he slows down to train someone, leaves the clinic to deliver a baby, or discusses results with a patient over the phone instead of in person. He is part of a team that includes other physicians, a nurse practitioner, nurses, a dietitian, a respiratory therapist, a mental health worker, public health nurses and community care workers.

Canadians’ appetite for change comes from a combination of desperation and hope. According to the Pollara results, most Canadians (87 per cent) are aware of dire shortages of doctors and nurses and more than half are dissatisfied with the time they have to wait for access to care. Half say their

confidence in the health system is falling, but there’s a glimmer of hope: that confidence is falling less dramatically than it was in Pollara’s poll a year earlier. And positive development is collaborative care. “Frustration is at a peak,” says Michael Marzolini, CEO of Pollara. “Collaborative care is a manifestation of the desire for change. Canadians see it as doable and affordable.” And they want something to happen, he adds. “Health care has been the No. 1 issue on the minds of Canadians since 1998, usurped briefly by Sept. 11 and the war in Iraq,” notes Marzolini. “If governments don’t deliver, there will be hell to pay.”

The shift to collaborative care is not going to be easy. In September 2000, Health Canada set up its $800-million transition fund to

READY FOR THE TEAM APPROACH THE PUBLIC WANTS IT, EVEN IF IT DOESN’T LOWER THE TAXPAYER’S BURDEN % who think having access to a team-doctor, nurse and other health-care providers-would ...

THUMBS-UP FROM THE FRONT LINES OF HEALTH CARE % who support having health professionals work in teams to increase patients’ access to care:

help jurisdictions all over the country introduce collaborative care, 24/7 access and other improvements to primary care, the front line of health care where the patients first encounter the system. So far, $572 million has been committed. “It is a hugely complex thing we are trying to do,” says Moriarty. “There is no road map; it has never been done before. All provinces have different issues, and we are trying to take a national approach.” In Vancouver, Dr. JimThorsteinson, a senior medical director for the Vancouver region, is doling out seed money from the transition fund to local primary care projects that involve collaborative teams. “It is going to take a decade before it is really happening,” he says. “The hardest group to get on side is the doctors.” Hutten-Czapski is one doctor who warns that collaborative care is not the be-all and end-all for every problem. For instance, he says, what a small twoor three-doctor town with a hospital would really need is another family doctor. “Family physicians are the Swiss Army knife of medicine,” he says. “We may not be the best tool for everything, but there’s something in that knife that deals with a wide range of circumstances.” While there is a need for nurse practitioners in places like Haileybury, especially to improve preven-

tive-care services, he says, “that wouldn’t solve the workload issue of being on call every second night. In my case, I’m on call for obstetrics, neonatal resuscitation, Caesareans, traumas in the emergency room.” If the resistance comes down to a matter of turf wars, they no doubt date from student days. It’s popular among health lead-

ers these days to observe that you wouldn’t train members of a hockey team separately —goalies at goalie school, wingers at winger school. So why aren’t health-care professionals who are going to work together as a team training together? It’s starting to happen. Overlap in courses for students in various health-care professions is a growing trend at Canadian universities, says Lois

MacGregor, associate professor in health and human performance at Dalhousie University in Halifax. There, students in medicine, dentistry and other health professions (including kinesiology, occupational therapy, nursing, pharmacy, social work and vision services) take workshops together. “They are learning together to work together,” says MacGregor. “It is designed to break down barriers between professions.”

Training future doctors to work collaboratively with other health-care providers is also an official component of residency training across the country, says Dr. Jock Murray, professor of medical humanities at Dalhousie. Director of the Dalhousie Multiple Sclerosis Research Unit, Murray has seen how well the collaborative approach can work. In his unit, 2,400 MS patients have access to neurologists, educators, nurses and a nurse practitioner. While physicians can help them with serious issues, those other professionals can discuss things like swallowing problems, sexual shortcomings or bladder control issues. “We can provide a level of care that wouldn’t occur if they were using only physician care,” says Murray. “If not for a multidisciplinary concept, these problems would go back home with them.” It’s a wave that’s about to break on the stressed-out health-care system. [¡1 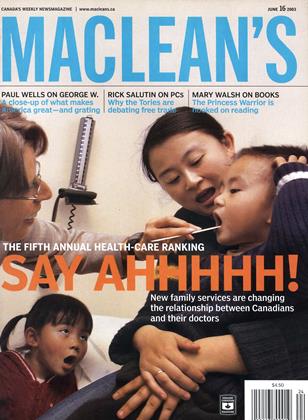