SARS, mad cow and a stronger loonie—how much can one industry take?

MOSTLY THEY’RE already married when they step off the plane. But the Japanese newlyweds can’t wait to stroll down the aisle at the old Campbell homestead in Park Corner, P.E.I. There, as music from a centuryold organ wafts through the air, they get to have the recently retired Rev. Ches Boutilier declare them husband and wife on the same spot where Lucy Maud Montgomery, creator of their beloved Anne of Green Gables series, was married 93 years earlier. “It’s a huge part of their culture,” explains George Campbell, a descendant of Montgomery, who owns the Anne of Green Gables Museum, as the family home has been rechristened. “It’s a dream for so many young Japanese couples.” In a good year up to 75 Japanese couples redo their wedding vows there. This year, though, a SARS-averse

Japanese government is urging its citizens to avoid Canada. The upshot: so far just nine couples are planning to say “I do” in the Campbell parlour.

Think things are bad at Green Gables? Just cast an eye at Canada’s other tourist icons. Visits to the CN Tower are down nearly 30 per cent since the first SARS case was reportedin March. Ontario’s Stratford and Shaw theatre festivals have seen a steep decline in ticket purchases by Americans. Advance ticket sales to the Calgary Stampede, which starts on July 4, are down by just three per cent, but the mad cow scare looms. A quarter of the honeymoon suites in Niagara Falls, Ont., hotels are empty during

what’s normally the height of the season. “You have to have confidence that things will get better,” says Tony Zappitelli, director of operations at the Sheraton Fallsview Hotel.

Things have rarely looked worse for Canada’s $5 2-billion travel and tourism industry. SARS. Mad cow. West Nile. What more could happen to our battered innkeepers and restaurateurs? Try a soaring loonie that makes visits to Canada more expensive, a faltering U.S. economy and a Canadian airline teetering on the brink. “Some people in my industry are calling it the perfect storm,” says Marc-André Charlebois, president of the Association of Canadian Travel Agencies. “I hate the imagery, but it’s not far from the truth.”

We’re far from the only ones feeling the pain: the United Nations predicts five mil-

lion people will lose their jobs in the worldwide tourism industry this year because of SARS and the economic slump which was already underway when the crisis began. Asia, with a 30-per-cent employment decline in recent years, will be the hardest hit. Still, the effect on Canada is enormous: SARS alone is expected to cost the economy $2.1 billion this year, according to the TD Bank Financial Group. In Toronto, the public health crisis is also a jobs crisis. Statistics Canada says 4,000 Torontonians in the hospitality industry got pink slips in April. That month, hotel occupancy rates hit an alltime low of 29 per cent as conventions, film shoots, business trips and vacations were

Toronto may be the centre of the SARS outbreak, but many foreign travellers don’t differentiate between the Ontario capital and Vancouver Island or Newfoundland’s Great Northern Peninsula “Japanese tourists will travel the country in a week,” says Adam Doiron, vice-president of Charlottetown-based Prince Edward Tours Inc., which caters almost exclusively to Japanese travellers, and has yet to sign on nine of its 12 seasonal guides due to a 75-per-cent drop in business this spring from ayear ago. “If one destination is unsafe, in their view everything is unsafe.”

pected to lose $50 million in tourism income due to the fallout from the disease. Hotel occupancy in Winnipeg—also SARS-free —is at its lowest level in a decade. Then there’s Alberta where, amid fears of mad cow disease as well, spending by foreign tourists is down 15 per cent from last year. Out on the West Coast, economists predict the downturn in Asian travel will cut into the 2.5-per-cent economic growth British Columbia was expecting this year. Back east is the exception. Some lodges and golf courses on Nova Scotia’s Cape Breton Island have seen bookings climb by as much as 40 per cent, with any decline in foreign visitors being more than made up

for by travellers from the rest of Canada.

For most operators, things could get worse if the latest outbreak of SARS isn’t contained. Scary evidence comes from Britain where a foot-and-mouth epidemic in 2001 cost its tourist industry almost $300 million per week. “Most travel decisions are psychological, not rational,” says Martin Taller, owner of Ports of Call Travel Services in Ottawa. “We’ve been hit by a succession of external events, the world is watching and that is making it very hard for the industry to bounce back.”

In an effort to rebuild the image of a safe tourist destination, Canadian tourism officials are consulting with British and Amer-

ican operators to learn how they survived fallout from 9/11 and mad cow. Ottawa is spending $20 million on an advertising campaign to attract foreign travellers. And a desperate industry, trying to claw its way back, has made discounting the order of the day as tour companies scramble to fill hotels, cruise ships and airline seats. Same goes for sports and entertainment—a single $69 ticket for the “Together for Toronto” event in July includes tickets to a Toronto Blue Jays game, a World Wrestling Entertainment SmackDown! and the Molson Indy car race.

Will clever marketing be enough? Last week, despite the latest SARS outbreak,

Brussels-based Interbrew SA, the thirdlargest brewery in the world and parent of Labatt Brewing Co. Ltd., flew its directors from Europe and the U.S. into Toronto for a board meeting. CEO John Brock said that the company wanted to “show tangible support for our many loyal Labatt and Interbrew hotel, restaurant and pub customers who are feeling the economic consequences of a much misunderstood—albeit serious—disease.” But that same day, health officials in Ontario warned the number of SARS cases could double. For the tourism biz, things could get worse before they get better. fJl 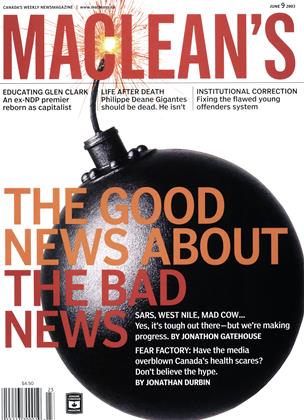