After years of study, I’ve come up with two—but they’re all you really need

WE NOW introduce Wells’s Rules of Politics. I have been working on them for years. So far I have only come up with two. If your goal is to understand Canadian politics, there is no obvious need for more than two rules. Here they are:

Rule 1: For any given situation, Canadian politics will tend toward the least exciting possible outcome.

Rule 2: If everyone in Ottawa knows something, it’s not true.

The rules are closely related. Usually when Everyone Knows what’s about to happen, they’re really only hoping it will happen so their boring lives (see Rule 1) will become more interesting. So Everyone Knew the Kyoto accord would devastate Alberta’s oil patch. Everyone Knew Stockwell Day would revolutionize federal politics. Usually, when Everyone’s wondering what will happen next, the likeliest answer is, “not much.” See Rule 1. Let’s apply Wells’s Rules to the busy political season ahead. m Paul Martin will be the next Liberal leader. Everyone Knows this, yet it’s actually true. These rules aren’t perfect. Sorry. ■ The overlapping regimes of Paul Martin and Jean Chrétien will make Canada ungovernable. Ungovernability scenarios are all the rage in Ottawa, because chaos would be so much more fun than real life. Here’s the latest version of the theory. Liberals will vote on Sept. 19-21, in ridings across Canada, to select delegates to their November leadership convention. If Martin is way ahead at the end of that weekend, the convention becomes a formality because he can’t lose.

Well, there are five months from September until Chrétien leaves in February. (Everyone Knows he’ll be forced out earlier. So he won’t.) During that time there’ll be a lame-duck prime minister in Ottawa and a shiny new Liberal leader waiting in the wings. Everyone Knows this will cause chaos.

Why? Because backbench Liberal MPs will vote against Chrétien in the Commons. At least they’re always telling the Globe and Mail, off the record, that they will. They

never do, not in sufficient numbers to cause real trouble. It would be terribly exciting if they suddenly acquired the courage of their anonymously stated convictions. Which is why it won’t happen.

Maybe there will be chaos because foreign leaders won’t know whom to call. This assumes foreign leaders have a morbid interest in the machinations of the Liberal Party of Canada. It’s more likely they have a phone number in the Rolodex under Canada, Prime Minister. If Jean Chrétien picks up

the phone at the other end, he’s the guy. I know this interpretation is woefully naive. That’s how I know it’s also true.

■ Martin will call a snap election as soon as he gets into office. Even if Chrétien hangs on until February, Everyone expects a spring vote at the latest. Go straight to the people and get a fresh mandate.

Paul Martin has wanted this job since he was a lad. He has been campaigning for it, at varying levels of intensity, since 1988. He has spent the last year obliterating any obstacle that stood in his way. That smoking

hole in the ground shows where Brian Tobin, Allan Rock and Herb Dhaliwal used to stand.

So the minute he gets the job, he’s going to give Canadian voters a chance to take it away? I don’t think so. There are all kinds of excuses for waiting before calling an election—the need to express a new philosophy of government with a federal budget, for instance. But they are only excuses. The real reason is that when Martin finally gets the job of his life, he’ll be in no mood to ask us whether we want to take it away.

■ The winning message for Martin is “change.” If the next leader sounds like a second decade of Jean Chrétien, the party’s doomed. There may even be something to this line of argument—although I recall a trio of Martin strategists using the same analysis to explain to me why the Liberals were already doomed in 2000, a month before Chrétien won his third majority.

But if it’s true the next Liberal leader has to be the candidate of change, it’s also true it’s a delicate job. The early signals are that Martin will cock it up profoundly. The newspapers are full of stories saying Martin will overhaul his cabinet, booting out opponents like John Manley, Sheila Copps, Martin Cauchon and Jane Stewart, replacing them with loyalists like Stan Keyes and Albina Guarnieri.

Two problems with that analysis. First, you have to be lodged pretty far up Ottawa’s butt to believe that when Canadians want change, what they mean is, “I want Stan Keyes in cabinet.” A cabinet shuffle isn’t change. It’s business as usual in Ottawa.

Second, notice how all the leaked stories announce doom for Martin’s enemies and clover for his supporters. Well. Since Martin won the Liberal leadership by denouncing Chrétien as a bully and a patronage baron, he won’t exactly distinguish himself as a change agent by bullying his own enemies and rewarding his pals.

Finally, when a new guy campaigns by running against the old guy, the risks are high that he’ll alienate his party’s old supporters without convincing any new ones. If I were Stephen Harper or Jack Layton, I’d want nothing more than for a Liberal who spent a decade in power to tell everyone why it’s time to make a change. The next federal election might be more interesting than we expect. But only a little. See Rule 1. 171 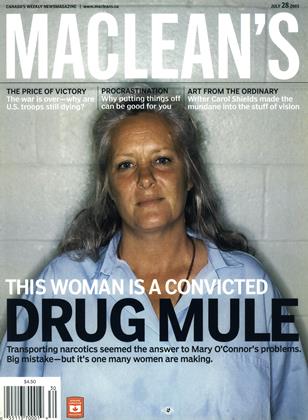