If everything he’s said during the Liberal leadership campaign can be believed, Paul Martin will single-handedly reverse generations of political centralization in Canada. His most significant promise is to wipe out Canada’s “democratic deficit” the way he killed the fiscal deficit. No more “friendly dictatorship,” to borrow Jeffrey Simpson’s phrase for the way Jean Chrétien hoarded influence and control. In its place, nothing but friendly.

Backbench Liberal MPs will be free to vote down government bills and to introduce their own private members’ bills on subjects of their choosing. And not just Liberal MPs: opposition MPs will have the same enhanced power to introduce bills. Debates about all these proposed laws will last indefinitely, as Martin will curtail the government’s use of closure and other tricks to cut debates short.

Martin will abandon any control in choosing which MPs run parliamentary committees. That means giving up a tool for rewarding loyalty, but no matter. Ministers will be told to appear more often before these freewheeling bands of MPs to justify departmental spending. The same committees, divorced from prime ministerial

control, will review Martin’s appointees to the Supreme Court, and perhaps appointments to lower courts, ambassadorial posts or to the Senate. Can’t say for sure. Martin won’t decide which appointments need vetting. He’ll let a committee of MPs write the list for him.

More committees! Martin will create a parliamentary committee on Canada-U.S. relations—and a parallel committee in cabinet itself, chaired by Martin himself. He will give MPs the bigger budgets they need to keep in touch with their U.S. counterparts.

Do all these new committees and budgets have you worried about waste? There’ll be a committee for that, too. Sorry, two: a “cabinet committee to eliminate service overlaps,” and a “parliamentary committee to constantly review this process.”

This river of power gushing away from Martin won’t—can’t!—stop at the gates of Parliament. Anyone who pays $ 10 for a Liberal party card will have the boss’s ear too: when the Liberal party—“in national or provincial meetings”—passes resolutions, Martin promises to “treat them with a greater degree of seriousness” than Chrétien did. And whenever the Liberals’ Aboriginal, women and youth commissions have an idea, “we should be in constant dialogue.”

Not a Liberal? Not a problem. Martin will empower the provincial and territorial premiers too. He’ll show up dutifully at an annual conference where the 13 of them can ask for... well, anything: he promises “an open agenda.”

Not a premier? No worries. Canada’s mayors will get their own “new deal,” featuring potentially billions of dollars in foregone federal revenue; matching provincial largesse; and a seat at some federal-provincial meetings.

Not a mayor? That’s OK too. “Agricultural leaders in southern Ontario and the rest of Canada must bring their specialized knowledge to the national decision-making table,” Martin’s campaign promises.

You get the picture. If Jean Chrétien and his predecessors were vampires sucking the nation dry of money, control, and influence over promotion, advancement, scheduling and agenda-setting, Martin will be a one-man horn of plenty, bestowing munificence on every breathing Canadian.

None of that is the problem. This is:

When in the last 15 years or so has Paul

Martin ever behaved like a man who is fond of relinquishing control?

This is a guy who decided in the spring of 2002 that he might have to leave cabinet— at least in part because, as his legions of handlers explained to us off the record, Chrétien had asked to edit one of his speeches. (Chrétien fired him two days later.)

This is the man who wouldn’t comment on Chrétien’s own announced retirement date until he had huddled for three hours with his legions of handlers to write multiple drafts of a four-sentence statement.

This is the candidate whose leadership campaign relied on “town hall meetings” with rooms full of “ordinary Canadians”— each of whom had been hand-picked by a succession of public-policy think-tanks hand-picked, in turn, by the Martin campaign. This ensured Martin’s interrogators would be policy wonks familiar with the genteel accommodations of academic debate. Of course he couldn’t know precisely who would show up or what they’d ask. But it would be hard to imagine a more comically finicky “improvement” over the ancient method for running town hall meetings: (a) rent hall; (b) open door.

scrums in front of a microphone in the Commons lobby, a set-up that leaves ministers with unreliable escape routes. Only Martin was allowed to pause halfway up a staircase, so he could flee upward the moment things got hot.

This is the guy who spent years stuffing the Liberal party like a Christmas goose— his designated candidate for the presidency of the party’s powerful youth wing won the job in 1998—then choked off access to party memberships as soon as the first serious candidate, Brian Tobin, began to gear up in 2001.

This is not, in short, a freewheeling guy.

To his credit, Martin has acknowledged that a prime minister who loosens his grip on power must expect to have trouble getting things done. “There will be disagreements. There will be reports that caucus is divided,” he told Osgoode Hall law students on Oct. 21,2002, in his most important speech on parliamentary reform. “From time to time, the government’s legislation will be defeated, leaving ministers—even the prime minister—looking discomfited.”

So Martin at least appears to be walking into the job with his eyes open. And there’s no reason to believe his interest in relaxing central control is newfound or insincere. The former finance minister and I don’t chat as often as we used to, but I recall a few conversations

over the years in which Martin pointed across the room at some backbench MP usually regarded as a maverick and said, in effect, “There must be a way to turn that guy’s energy into an asset instead of a problem.” But in politics, where you stand depends, to a great extent, on where you sit. It’s a lot easier to say, “That guy has too much power,” than to say, “I have too much power.” Martin has shown admirable tolerance for backbench Liberals who badmouth the prime minister. But then, he’s not the prime minister yet.

Certainly there is ample precedent for politicians whose view of power changes as soon as they get some. My favourite is François Mitterrand, who wrote a pamphlet in 1964 complaining that Charles de Gaulle had designed France’s executive branch around a catastrophic excess of power in the institution of the presidency. He called it “le coup d’état permanent”— the never-ending coup d’état. Then Mitterrand got himself elected president in 1981 and discovered he liked all the power just fine.

British journalist Andrew Rawnsley has written about Tony Blair’s “hunger... to control all from the beginning.” He adds that Gordon Brown—Blair’s finance minister and Paul Martin’s closest equivalent in the Labour

party hierarchy—has “an almost pathological urge to be in control of everything and everyone around him.”

There is a reason, far more compelling than simple egomania, why politicians tend to be control freaks. It is that they want to get things done. Another ofMartin’s selling points is that he has a lot more to get done than Chrétien ever did.

His campaign statements have been full of urgency. “We need helicopters right now,” he has said. A national security policy is “a matter of priority.” On home care: “This is

so important.” His new deal for cities? “Without political delay.” Debt reduction? “We must not rest.” Early-childhood development? “Do whatever is necessary.”

But it’s hard to hurry through a full agenda when you inhabit a permanent graduate seminar where every opinion has equal weight, debates never end, and rebellion and loyalty receive equal rewards. Historically, Martin’s patience with the niceties of process has ended as soon as those niceties got in the way of his making a decision.

In their book Double Vision, Edward Greenspon (the current editor of the Globe and Mail) and Anthony Wilson-Smith (now Maclean’s editor) describe Martin’s impatience with the Ottawa system. “The bureaucracy is very process-oriented and I’m

not,” he said in a 1995 interview with them. “Nobody who has been in business is. I basically want to get a job done. I don’t give a goddamn about the process. For the bureaucracy, what’s interesting is that as long as the process is working, everybody is happy. The thing can go on for years. We don’t have years.”

The amount of time any prime minister has to implement his agenda is shorter than it looked ahead of time, because the random tumble of events has a way of crowding out any orderly plan. “If Paul Martin had become prime minister in March,” a veteran Liberal said recently, “he’d have spent the year dealing with SARS, mad cow and Iraq, instead of whatever he thought his agenda was going to be.” (Characteristically, Martin has said he would have done more on SARS, mad cow and Iraq than Chrétien did.)

Martin has a blanket rebuttal to all these caveats. The easiest cop-out in the world, he says, is to decide in advance that change is impossible, thereby guaranteeing change never happens. While he is too polite to say it directly, that’s the core of his critique of the Chrétien years: that the country wasted a decade biting offless than it could chew.

“There is a hunger to move beyond tired old ways of doing things,” he said in one speech. “To deploy the councils of government in response to the pressing needs of our streets, to speak a language of national ambition.”

Fair enough. There is no lack of ambition here. Martin wants to accomplish more than Chrétien did in less time; invite his own MPs to vote against him; let the opposition fill up the quiet corners of the parliamentary agenda with their own bills; let debates run on and on; give up revenue he could have spent on his own projects; invite premiers, mayors, farmers and your uncle to join the fun; and keep an even temper through it all.

It might even work. It is worth the try. Martin has one more incentive for success: given the expectations he has raised, in the MPs around him most of all, the backlash if he fails will be devastating. ilfl 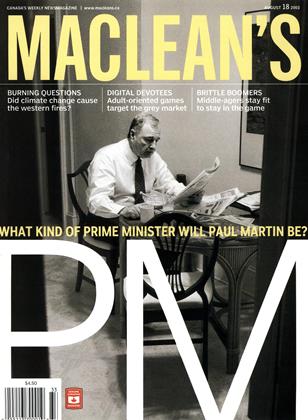