The message that the Aug. 11 cover image sends, at a time when abuse of animals is at an all-time high, is a very negative one/ -KAREN CHALMERS, London, ont.

Brownfield redevelopment is the ultimate example of sensibility, and on a big scale (“Reclaiming Toxic Ground,” Cover, Aug. 11). Canada has been blessed with an abundance of land, but that does not give us the right to wasteful practices. Having spent the past eight years working on major brownfield redevelopments in southern Ontario, I have seen first-hand the reasons why reclamation of these lands is so important to safe and healthy communities. Credit has to be given to pioneering developers, landowners and municipalities that have overcome the many challenges associated with these former industrial lands.

Thank you for this inspiring issue. It shows us that toxic land can be and is being reclaimed. Focusing on good begets more good. The horrors and fearmongering that have been the daily diet in our news for so long keep people focusing on and expecting the negative. Keep up the good news. Joanna Wilkinson, Victoria

I really enjoyed your article “Reclaiming toxic ground.” However, I thought the cover photo showing a child pulling a dog’s tail was absolutely horrible. Maclean’s shouldn’t have had this picture in its magazine, and especially not on the front cover.

As a national magazine, Maclean’s can influence readers of all ages in a positive manner with its front-page photos. Instead, your negative portrayal of an adult, child and dog unfortunately screams: “Teasing animals is fun and acceptable,” and “Grown-ups do not need sun hats and can disregard the effects that the sun’s UV rays have on skin.” Helen T. Booth, Calgary

I wholeheartedly agree with Allan R. Gregg’s view that pure demographics only provides one small part in understanding the dynamics and potential impacts of an aging

society (“Aging is as aging does,” Essay, Aug. 11). There are many more forces at play than the raw numbers of people reaching their mature years contributing to the complexity of an aging society. Just as demographics can help us predict an overall aging of society, biology and past experience tell us that the flowers will likely come back in the spring. Some will be a little stronger and spread. Others will look about the same as last year while still others will appear a little weaker. Why? An endless list of contributing factors—soil condition, amount of water, how harsh a winter, one plant shading another, disease, insects and roots from different plants fighting for nutrients

ALLAN R. GREGG PRESENTED SOME UNSETTLING IMAGES IN HIS AUG, 11 ESSAY on changes in an aging society ("Aging is as aging does"), writes Jeff Kerley of Lantzville, B.C. Gregg’s “suggestion of today’s teenagers drooling over posters of Susan Sarandon or Sean Connery in sexy poses Is frightening,” Kerley says.

“ ‘Reshaping society in non-linear ways,’ for sure, but does It have to be the wrinkly shape of a 72-year-old with no shirt on?

For the love of God, baby boomers, think of the children!"

below the surface. Yes, we are an aging society. Yes, the garden will be back next spring. But what will it look like? That’s where the complexity lies.

Tut-tut! Your slip is showing. In the Aug. 11 Scorecard item “Heartless ranger,” about putting thousands of female koalas on birth control, you call these marsupials “bears.” Please, they are not bears. On a recent trip to Australia we were told in no uncertain terms not to call koalas “bears.”

In his Aug. 11 column (“The new peacemaker”), Peter Mansbridge refers to Canada as a middle power. Of the 190 or so countries in the world we must, surely, rate among the weakest 60 in terms of military strength, thus making us a lesser power. As we are unlikely to have any countries as enemies, being lesser is probably adequate. In the case of a national emergency, however—for example a devastating earthquake around Vancouver—Canada’s military will be of questionable use. It could only muster 115 personnel to fight major forest fires in B.C., and they took some days to arrive and get trained. Fortunately for us, the Americans have massive military power at our doorstep and would be here in a jiffy, fully equipped for disaster relief, while our Prime Minister would still be in his usual doldrums. Undoubtedly the relief efforts from other countries such as Japan and Mexico would likely get here before our own military. Sad commentary.

The American administration will love the article from Canada’s most influential news anchor that implies Canada will be proud to go in and peacemake after supreme U.S. forces win a pre-emptive mission. Pre-emptive strikes may make more sense today in the attempt to relieve human misery resulting from stupid, insensitive rule. However, Canada’s message to the U.S. should be that the United Nations is the only body that has the responsibility to make that decision. Surely the leading minds throughout the world will come to this realization soon as the struggles of an undermanned coalition of two countries become increas-

ingly mired in the local problems of lack of water, food, medicine and employment besetting a dangerously insecure population such as Iraq’s.

In the Aug. 11 issue, you quote Ben Chin speaking about fairness in journalism (“Ben Chin on yoga, ketchup and the Windsor knot,” People), and slam Sheila Copps for her proposal to lower university tuition, scrap fees for new immigrants, increase foreign aid and military spending and implement a national child-care program (The Week). Not only do you not provide any context for her proposed “spending agenda,” but nearby you have a cartoon implying Ms. Copps has no regard for a balanced budget or debt reduction. At least be responsible enough to ask Ms. Copps how she would pay for such expenditures—and why she believes such initiatives are so important.

The biggest problem with modern research into psychology, including dreaming, is that the focus is on purely the physical-everything, it seems, is reduced to chemical interactions (“The stuff that dreams are made of,” Cover, Aug. 4). What is missing is the spirit part of the equation. Although it is difficult to prove, the individual may be life energy (spirit) animating a physical body. One purpose of the brain is to receive information from the “self” and put it into action. Dreaming may be an experience in another dimension brought to consciousness via the brain as an

interface. At least this theory is worth considering, don’t you think?

It could take awhile

Visiting Canada, I came across the Aug. 11 issue wherein you describe how the U.S. is failing to bring peace and democracy to the people of Iraq despite having 170,000 or more troops there (“A bloody road to peace”). The very next article describes how just two Canadians in war-tom Sri Lanka teach about democracy and bridge the deadly divide (“War and the Canadian way”). My God, you people are saints. Please, tell us, how can we be more like you?

ribution by Bush Jr. for insults to Bush Sr., (b) an excuse to squander untold billions on the U.S. weapons industry, and (c) control of Iraqi oil. It also includes (d) making Iraq safe for democracy and (e) ridding it of bad guys. Canada has taken the high road in all this and may be paying for it. But the price of the low road almost certainly would have been incalculably higher in blood, money, insecurity, incivility and disgust.

I would never begrudge Torontonians the delights and necessity of hosting a SARS recovery concert for themselves (“Rock on,” Concert, and “Just ignore the whiners,” The Back Page, Aug. 11). But like many others, I don’t enjoy Toronto because ofits pathological blandness, a situation Torontonians hotly deny and can’t understand because they’re not able to perceive their own condition. Unfortunately for the rest of us, we see it clearly and must endure cries of, “We’re an exciting world-class city,” and so on.

As a former Torontonian living in British Columbia for 11 years, I see things from both sides now (sorry Joni). Yes, Canadians are a bunch of rattle-toting whiners. We know we’re privileged, living in such a great country. However, this whining thing has become second nature. I think it’s largely due to an inferiority complex or some other psycho-social issue. Sometimes the whining is done in good fun, but most of the time it is very tiresome. I’m especially tired of the slagging Toronto receives. I still love the place and talk it up when people try to criticize it, as Vancouverites often do. I just want to wish T.O. all the best. You have a lot to be proud of. I’ll be back soon. Doug Little, Vancouver

It seems to me that Edward L. Greenspan’s essay on people being secretly jailed and deported is one of the greatest importance (in defence of freedom,” July 28). My only concern is that Greenspan refers to “Ottawa,” “Canada,” and “the government,” but at no time does he mention Jean Chrétien’s Liberal party as the author and implementer of this whole disgraceful situation. 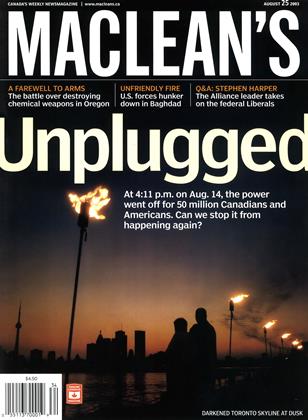