THERE’S A PUB across Wellington Street from Parliament where the sandwiches are named after famous politicians. The Paul Martin is bruschetta. But what John Manley swallowed with Martin’s name on his lips last week wasn’t Roma tomatoes and shaved asiago cheese—it was his own pride. Like Brian Tobin and Alan Rock before him, Manley gulped, winced and conceded that Martin will be the next prime minister. All that’s left of the leadership race now is the bitter taste in their mouths—and the obstinate candidacy of Sheila Copps.

Over lunch in her Parliament Hill office on the day after Manley surprised Ottawa by bowing out, Copps muses between bites of falafel about her new status as the last of the contenders still willing to remain in the ring with Martin. One subject the Canadian heritage minister won’t discuss is the reality that not only is Martin virtually certain to demolish her, his margin of victory will force pundits to hunt for alternatives to the already over-used “cakewalk” and “coronation.” What she is eager to talk about is preventing Martin’s towering pre-eminence from choking off all meaningful debate among Liberals. “We’ve always been strong as a party because we have managed to bring together all of the elements that are percolating up through Canadian society,” Copps says. “What seems to be being suggested by some now—that we should basically anoint a leader—would be very damaging for our party, for its renewal, for its capacity to attract new people.”

Few would deny she has a point. But many would dispute that Copps has the stature to wage an underdog campaign strong enough to sustain the level of interest she’s talking

about. She has been widely discounted from the outset as possessing the least potential among Martin’s main rivals. Ironically, those low expectations may have given her more staying power. Supporters of Manley and, before him, Tobin and Rock, might actually have harboured wild ideas about winning— or at least bringing a respectable number of delegates to the party’s November leadership convention. So when the overwhelming might of Martin’s machine extinguished those faint hopes, their leadership bids were snuffed out with them.

But Copps’s backers can’t afford such

delusions. Not on the strength of a measly $340,000 of declared fundraising, up against Martin’s bulging $ 6-million-plus war chest. Not on the backs of the 32,000 new party members Copps has signed up, against the army of 125,000 who joined under Martin’s banner. And, more fundamentally, not on the basis of Copps’s problematic image, which remains pugnacious rather than prime ministerial. So why bother? Copps’s insistence that it’s all about ideas has to be taken seriously. As Martin ascends, her ob-

durate stance is a reminder of the sort of fractiousness that has often characterized the Liberal party at its most productive.

Her big test will be trying to get real media attention for the detailed, left-of-centre platform she plans to release this week. Asked for a preview of a key file on which her vision clashes with Martin’s, her first thought is Canada’s relationship with the United States. Copps casts Martin as a continentalist, focused too narrowly on Canada-U.S. ties, while portraying herself as an internationalist. “Paul has moved very quickly to support ‘perimeter North America’,” she says.

“I think the greatest threat to our stability is the retrenchment into one continent that could be an outcome of Sept. 11.” The split over how tightly to knit the two countries together shows clearly on the question of Washington’s controversial “national missile defence shield.” Copps is staunchly against Canadian participation. Martin has said Canada needs to be involved, at least in talks on trying to develop the system for shooting down missiles.

That’s the sort of stuff that has, at least in

the past, got Liberals thinking—and arguing. But how much scope is there for real giveand-take while Martin holds such a daunting level of support in caucus, cabinet and even riding associations? Who dares challenge him (other than Copps)? One Liberal MP quips that the absence of much in the way of audible dissent these days is the result of “presumptive cabinet solidarity”—the selfinterested tendency of MPs who hope to get into Martin’s cabinet to avoid saying anything that might hurt their chances for the big promotion. That motivation won’t last forever. The true test of Martin’s ability to command loyalty will come after he names his ministers, unavoidably leaving most MPs on the back benches.

All prime ministers have leverage with ambitious MPs. But the breadth of Martin’s power base at this stage is extraordinary. The last two important prime ministers, Jean Chrétien and Brian Mulroney, both took over their parties with no choice but to come to terms with former adversaries. Chrétien needed to bring Martin onside—even though they had been bitter leadership rivals. Mul-

THE TRUE test of Martin’s ability to command loyalty will come after he names his ministers, leaving most MPs on the back bench.

roney had no sooner won the Tory leadership than he was reaching out to westerners like Don Mazankowski—who had done everything he could to stop Mulroney’s bid to oust Joe Clark in 1983. But Martin has easily enough support among top-level Liberals to ignore those few who opposed him, although he might wisely make room for a few to avoid appearing vindictive. And polls suggest his lock on the Liberal party could be cemented with a landslide election victory, perhaps as early as next spring.

A Liberal prime minister serenely in control of his own forces. At the same time, no opposition party that looks like it stands a real chance of forming a government. For a historic parallel, Richard Johnston, a political science professor at the University of British Columbia, points all the way back to the placid 1950s government of Prime Minister Louis St. Laurent. (The ratification

of St. Laurent as William Lyon Mackenzie King’s chosen successor in 1948 was the last federal Liberal leadership convention where the outcome was as near to certain going in as the current one.) “It meant that most of the time the government just got its way,” Johnston says. “By the same token, it lost touch with the population.” And that complacency paved the way for the startling victory of John Diefenbaker’s Tories in 1957.

Martin promises to do the opposite of exploiting his enviable position to concentrate power. The most prominent plank of his leadership platform is a plan to “confront the democratic deficit” (just as he did the budget deficit as finance minister—get it?). Ordinary MPs are to get more free votes and more chance to shape bills before they are passed into law. Commons committees are to be more independent from the Prime Minister’s Office and gain the power to review senior government appointments. These are substantial commitments. But given the enormous clout a prime minister wields in the Canadian system, modest institutional reform will only go so far. “Once Martin’s in power,” says Stephen Clarkson, a University of Toronto political science professor, “whether or not the government is completely centralized will depend mainly on his leadership style.”

After Martin’s long tenure in finance, his style is not entirely a mystery. He is a policy wonk who likes to get deeply involved in hashing out big decisions. “He’s definitely hands-on,” says Jack Mintz, who worked closely with Martin as a visiting economist in the finance department in 1996-97 and now heads the C. D. Howe Institute. “He reads a lot—he’s exceptional in that respect. And there are endless meetings.”

The politician Mintz describes can hardly be accused of being afraid of new ideas. But as finance minister, Martin was able to manage a sort of private debating society. As prime minister, he will have to cope with dissent that’s far harder to contain. The question is how willing he will be to allow other voices in government to acquire their own influence—counterbalancing primeministerial power in the way Martin himself did to an unusual degree during most of the Chrétien years. For now, though, Martin stands all but unchallenged. Liberals have only Copps to remind them, in her own quixotic fashion, that it doesn’t have to stay that way. ful 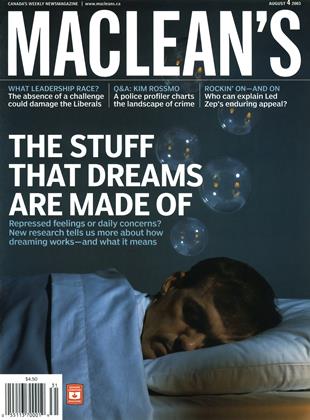