What’s changed at one of our oldest universities? Almost everything. Cool.

I CALLED MCGILL University the other day to ask what’s new. The answer was almost everything. Only from the outside does a big university look old. Here are some scouting notes.

Tuesday morning at the Faculty Club. Dozens of newly hired faculty members, most in their 30s, got a pep talk from Heather Munroe-Blum, the university’s formidable new principal. “This is the level of our ambition: that you should rank with the very best in the world in your field, over time,” she said.

The recruits stood one by one to say where they were working before they came to Montreal. The group at the first table was from Ohio, Russia, New York, Belgium, Italy.

Like universities around the world, McGill is hiring new faculty as fast as it can. Fully one-third of its faculty is 55 or older, edging closer to retirement. To replace them and grow, it must attract 100 new faculty members a year for the next decade. “This is the biggest renewal program in McGill’s history,” Alan Shaver, the dean of science, told me.

So: new profs. But that’s happening everywhere, not only at McGill. “There is literally a global hunt for talent right now,” MunroeBlum said. “It has never been as fierce as this.”

A university competes by making itself more attractive to genius. Ottawa and most provinces are helping by ramping up research spending at an unprecedented pace. McGill is one big construction zone.

Tom Hudson showed me the brand-spanking-new, $50-million McGill University and Genome Québec Innovation Centre. Hudson was born in Quebec, but he spent most of the last decade as assistant director of the Massachusetts Institute ofTechnology’s genome centre. He missed home. He missed hospital rooms: when he is not one of the world’s finest genetic researchers, he is an asthma doctor who wanted to get back to hospital rounds.

So McGill, with tens of millions of dollars from the federal and provincial governments, obliged by building this multidisci-

plinary, multi-university centre. Hudson will soon have 150 colleagues working with him. The tools they are using against asthma, multiple sclerosis, diabetes and other diseases are not far short of magical.

Hudson held up a plate the size of his hand, studded with fibre-optic pins. Each pin tests the reaction of genetic material; the plate can perform 100,000 tests at once. “Right now there are two labs in the world that have this technology,” Hudson said.

Genetic science used to be a guessing

game. If you thought the problem was on this one gene, you’d test it, ignoring the 30,000 other genes. Now Hudson can “interrogate” the entire genome. Millions of reactions in a few weeks. Mountains of data to sift. It’s like throwing a truckload of pasta at the wall to see what sticks.

Cloistered academe? Not on your life. Much of McGill is devoted to “technology transfer”—getting new knowledge patented and commercialized as fast as possible. Sometimes these days, before a particularly bright student defends her Ph.D., the review panel signs confidentiality agreements

so she can guard her intellectual property long enough to take it to market.

Where is the room for tradition in all this? At the music faculty, Don McLean, the dean, hides in a cubbyhole while construction crews build a $50-million addition. The building will contain an “optimal room,” a recording studio of pristine acoustic perfection. A concrete box, 60 feet wide by 80 feet long by 50 feet high, tucked inside another concrete box, floating on neoprene pads. (“The height is crucial,” McLean said. “We say the room has to be big enough that it doesn’t ‘run out of air.’ ”) Utterly soundproof. Eerily “propagating:” a whisper at one end will be heard at the other.

Outside Hollywood and London’s Abbey Road, there’s nothing like it. Movie companies are already begging to record soundtracks there. They’re out of luck. McLean has booked the place solid with physicists, electrical engineers, mathematicians, physiologists.

“The reason people in all these other fields are interested in music is because it’s so hard,” he said. Internet engineers, for instance, want to transmit immense amounts of data with no loss of signal. Well, put Pinchas Zukerman in Ottawa and a fiddle student in Montreal and they’ll tell you right away whether the Net lets them hear and see each other properly. Or as McLean puts it: “You want the ultimate content pig? You go to music.”

He’d kind of like to buy an MRI scanner. That’s right, for the music department. Play some music and scan the brain activity of a listener. A cognitive scientist’s dream. But there’s more. “The MRI reads the grooves on an LP faster than a speeding bullet,” McLean said. In an afternoon you could transfer hundreds of out-of-print vinyl albums to computer files. An archivist’s dream.

But as I spoke to nearly a dozen administrators about new challenges, new funding, new colleagues and new projects, I was struck by something I almost never see on Parliament Hill. These people are happy. [i'll 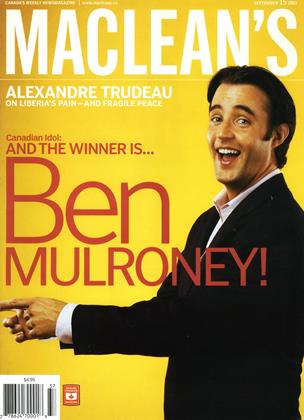