WITH NORTEL back in the news (for going up, not collapsing), it won’t be long before conversation at social gatherings returns to the stock market and the economy. Money, like wine, loosens conversations when it’s coming easily. If you feel inadequate when someone intones, “Techs are headed higher because GDP growth will be at four per cent,” or, “The word on Wall Street is that interest rates are going to drop sharply,” then here’s 10 tips to show you’re in the know.

1. Some smoothie is saying, “I talk to one of the biggest experts on tech stocks, and he’s saying buy (insert name of Nasdaq stock here).” You smirk and reply, “Nasdaq’s on Broadway, and they’ve had touts there since the days of, T got the horse right here, his name is Paul Revere.’ Such mountebanks were at their best in ’99. But I guess, like another great pitchman said, ‘There’s a sucker born every minute.’ ”

2. If a self-described expert says, “Look, everybody knows interest rates are going down,” say, “But gold is up 50 per cent from its low, the U.S. dollar is looking like the loonie used to look, and star economist Ed Hyman says U.S. growth will be more than five per cent this quarter.”

3. If another expert says, “Look, everybody knows interest rates are going up,” tell her, “But [Federal Reserve chairman Alan] Greenspan and [Bank of Canada governor David] Dodge are clearly on hold; the European Central Bank may cut rates if France promises not to let its budget deficit get out of control, and inflation is clearly not the big problem anymore.”

4. Suppose you want to impress an attractive woman at a party, and she lets on that she’s a member of an investment club and is interested in the stock market. Say, “Now that Americans in higher tax brackets are only paying 15 per cent tax on dividends— the same as they pay on capital gains—the big Canadian banks that trade in New York are attracting a whole new class of buyers. On a tax-adjusted basis, the typical bank

now delivers four times the yield an American gets on a money market fund.”

5. If that doesn’t work, add, “You could buy all the publicly traded mining stocks in the world for the market capitalization of Cisco, and so all it would take is a slight increase in investor interest to send stocks such as Inco, Newmont, or BHP Billiton up huge.”

6. You wander into the next room and hear two men arguing over gold. You note that their voices get louder the more they drink. One says, “Gold is going to a thousand.” The other one sneers, “Gold is one big delusion.” What do you do when they look at you?

Simple. You smile, and say, “Since the Bretton Woods Agreement, the American dollar has largely replaced gold in global exchange reserves. But few experts think

gold can be totally eliminated from the financial system. There’s certainly no chance of that happening when U.S. money supplies are growing far faster than GDP, and the U.S. Current Account deficit is at the danger level of five per cent of GDP. Indeed, the evidence is that gold should trend higher. But it certainly won’t go back to US$850 an ounce, any more than Nortel is going back to $100. Both those prices came in manias.” Then smile and leave them to fight it out.

7. A real problem can arise for the frightened neophyte if the blowhard attracting attention uses some impressive terminology. Example: “I always buy stocks based on their low p/e ratios—and I almost never lose.”

Impress the gathering with: “That used to work years ago, but these days, you have

to adjust reported earnings for stock option costs, pension fund losses, and recurring writedowns. What is truth anymore? It’s so hard to get honest numbers for so many companies that you can really get into trouble.”

8. Your big opportunity comes when someone confides in you that he “just doesn’t know what to think because it’s all so confusing.” This is your chance to say, “At least we don’t have to worry about deflation any more with prices for key commodities—including gold, oil and gas—so strong.” If he looks puzzled, ask, “Can you think of any time in recorded history when there was deflation at a time of rising commodity prices? ” After impressing him, excuse yourself because you’ve just noticed someone you must talk with. If you stay too long, he’ll start asking probing questions and blow your cover.

9. Remorse strikes when you meet someone who reminds you, in hurt tones, of a terrible tip you once gave—in a moment weakened by the interaction of atypical profits in your brokerage account and two martinis. There is only one recourse: “Oh, blast! I forgot I told you that, so when I dumped that stock (at fill-in-the-blank price, which was just about its all-time high) to get into (here, include name of another stock, with a price quote near its all-time low) I didn’t call you. Leave me your card, will you? Sorry, old chap.”

10. A sound strategy is to cite some factoid that can be neither proved nor disproved. Suppose you hear, “Well, with SARS out of the way, we can count on the American tourists coming back.” You look thoughtful and say: “One can hope. But I just came back from the West and tourism was down big there, and they had almost no SARS. What I hear is that so many Americans heard so much in their media about [Liberal MP] Carolyn Parrish, who called them ‘those bastards,’ and the hordes of other influential anti-Americans, that they decided not to bring their families to a country where they’re despised. There’ve been no apologies and anti-Americanism is still big, so why expect Americans to return?”

Thus armed, be prepared to be treated like an authority, rather than like a 98 lb. intellectual weakling. Itil 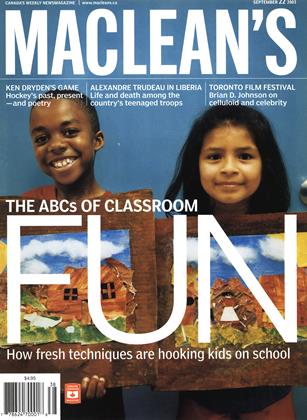