THE KAZEMI CASE Iran charged two women intelligence officers, one reportedly a nurse, with the “quasi-intentional murder” of Canadian photojournalist Zahra Kazemi, beaten to death in a Tehran prison. The case has created huge divisions between Iranian hard-liners and reformers, with the reformcontrolled intelligence ministry all but accusing the cleric-run judiciary of a cover-up— a charge levelled in Montreal by Kazemi’s son, Stephan Hachemi, who wants his mother’s body returned to Canada. Ottawa said it will ask the UN Human Rights Commissioner to look into what happened.

MYSTERY MEAT Health authorities issued a recall of about 60 different meat products in Ontario, following allegations that Aylmer Meat Packers Inc. near London was selling uninspected meat to consumers. The recall notice said the products were “believed to pose a risk to public health,” but did not say what that risk was or exactly how the prime cuts could be identified.

NATIVE JUSTICE Overturning a lower court decision, the New Brunswick Court of Appeal upheld the right of provincial Mi’kmaqs to cut and sell trees for a living from Crown land, a decision with significant implications for the province’s $4-billion-a-year forestry industry.

ernment has refused to turn over police photos and videotape from a fatal standoff with native protestors at Ipperwash Provincial Park in 1995. The government had argued the information was sealed by a police warrant when no such warrant existed.

SLEEPER CELL A group of 19 foreign students and refugees, some of whom were supposedly attending a bogus business school in Scarborough, Ont., may be a sleeper cell with connections to al-Qaeda, federal antiterror authorities alleged. The young men, 18 Pakistanis and an Indian, were arrested two weeks ago in a joint police and Immigration department investigation. One allegation against them is that they stole a radioactive gauge which contains an ingredient used in so-called dirty bombs.

POLITICS Both P.E.I. and Ontario were poised to call elections, and Newfoundland and Labrador won’t be far behind. It became the first province to actually legislate a rollback in car insurance—a 30-per-cent reduction in certain premiums for those who opt not to be compensated for minor injuries.

FOLLOW-UPS An Ontario mother, acquitted of abducting her seven-year-old triplets and smuggling them into Mexico three years ago during a bitter custody battle, has been ordered to stand trial again. The appeal court rejected her defence of necessity.

A Nova Scotia man who cross-examined his rape victim for six hours and attempted to have her 10-year-old son testify at the trial, was convicted of sexual assault.

A Bermuda man, acquitted of stabbing to death a 17-year-old Ontario tourist in a controversial, high-profile trial five years ago, has been found guilty of stabbing another young woman in similar circumstances.

COMPENSATION Saskatchewan’s Court of Appeal upheld one of the country’s largest medical malpractice awards—$2.3 million to a woman misdiagnosed with terminal brain cancer when she had a non-malignant tumour. She ended up with serious cognitive and mobility problems because proper treatment was delayed and she was subjected to extensive radiation and steroids.

CHEESED Canada is to offer a new face to the world at large. Ottawa has decreed that there will be no smiling on passport photos. 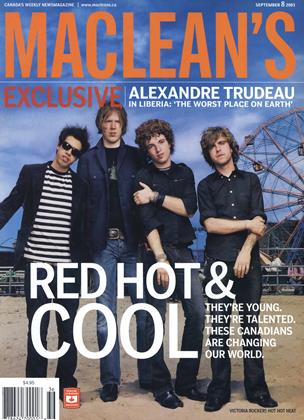