It was not the sort of surprise that brightens the holiday mood. Bob Speller, the newly minted federal agriculture minister, had just landed at Toronto’s Pearson Airport on the afternoon of Dec. 23 after a trip to Halifax to meet his counterpart in the Nova Scotia government. On the highway, driving home to his rural Ontario riding of Haldimand-Norfolk-Brant, he got the news: a probable case of mad cow disease in the United States. So he returned to Pearson to catch a flight to Ottawa, where he spent much of that night in emergency meetings with department officials. (After last year’s Canadian BSE crisis, those officials are mad cow experts.)

Freshly briefed, Speller-not yet two weeks on the job that Prime Minister Paul Martin handed him in the new cabinet-embarked on Christmas Eve on a test under fire that might have worn out even a veteran minister. The days that followed included a spate of high-pressure media interviews, intense conversations with worried provincial politicians and industry leaders-and nearly daily chats with the vacationing Martin and U.S. authorities.

The verdict: Speller is less than spellbinding on TV, but his hard work and swift actions have won rare kudos from his crucial farm constituency. Bob Friesen, president of the Canadian Federation of Agriculture, credits Speller’s experience heading a farm issues task force last year (for former prime minister Jean Chrétien) with allowing him to hit the ground running in his new portfolio. Among his smart moves: as the U.S. imposed new mad cow safeguards in response to its first BSE case, Speller drew attention to how Canada had already implemented many of the same measures. It was a good start on what’s become a very tough file. Now, can this sure-footed rookie get some of those closed foreign markets back open for Canadian beef? 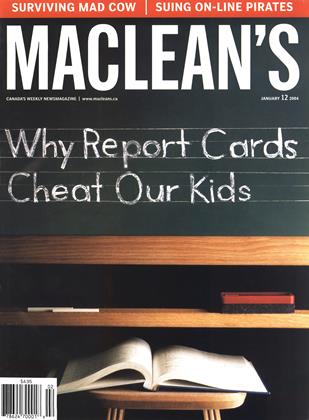