LIFE ON THE EDGE

You live on Vancouver’s North Shore, you take your chances. On a good day, when the two bridges over Burrard Inlet aren’t clogged, the abundant allure of downtown Vancouver is just 20 minutes away. On a bad day, you can encounter bears, but bears have their charms, too. They lumber down the mountains to fatten on compost and garbage. Coyotes follow suit, clearing yards of sluggish house cats and yappy designer dogs. Life is cheap in the Wild Kingdom, excuse enough for the monied of West Vancouver to buy Range Rovers for that risky trip to Starbucks.

That’s the thing about Greater Vancouver: it lives on the edge. The edge of sanity, some might say. The edge of Canada, of course, but also the edge of the frontier. Walk up the North Shore’s mountain creeks, and it’s a matter of minutes before the suburbs give way to genuine wilderness. There are many ways to get dead. Hikers fall into creeks and are swept out to sea. Others slip into ravines, or ski out of bounds and get hopelessly lost. Mountains to the north, the mighty Fraser River to the south, the Pacific to the west. What distinguishes Vancouver is the hard-core nature that hems it in.

People pay for the mild climate (although a recent freak snowfall had some demanding a refund). The outdoor soccer season extends from fall through spring. Sidewalk cafés stay open all winter. Nothing stops for rain, Gore-Tex being the favoured attire.

Vancouver has unnatural wild places, too. The drug-addled Downtown Eastside is just blocks from the financial district-a stark illustration of the vast gap between rich and poor. The bottom 10 per cent of families exist on an average $8,700 a year; the top 10 per cent average $205,200.

Meanwhile, the streets are alive with a wealth of languages. English is the mother tongue of less than half of Vancouver’s population. Chinese is the first language of more than one-quarter. The burbs have their own stories. Farsi on the North Shore. Punjabi in Surrey. The city’s most romantic read, buried in the Vancouver Sun, is the “Ships Calendar,” a daily listing of the arrivals, departures and cargoes of every freighter in port. It embodies the infinite promise of a city on the edge-a place of travel and trade, and of new beginnings. KEN MACQUEEN 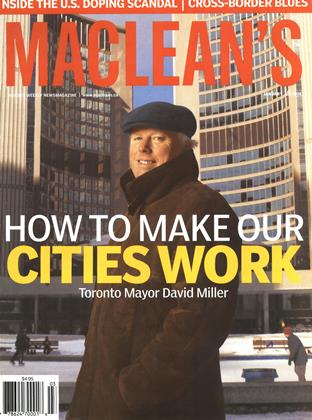