ON NOV. 11, 1918, as the armistice that ended the First World War took hold along the Western Front, far to the east the gunners of the 16th Brigade, Canadian Field Artillery, were fighting for their lives in a battle for the Russian village of Tulgas. The gunners were among 4,400 Canadians and more than 200,000 British, French, Italian, Polish, Finnish, Serbian, U.S., Czechoslovak and Japanese troops who had invaded Russia after the overthrow of the czar in 1917 and the subsequent Bolshevik Revolution that led to the collapse of the war’s Eastern Front.

Weary from four years of the Great War, Canada was “not keen on undertaking the fight against the Bolsheviks,” says historian Jack Granatstein. “Yet we found ourselves forced to participate as part of the price of One four-day skirmish in January 1919 was fought in cold that went down to -43°C

Empire.” Imperial pride aside, prime minister Robert Borden’s cabinet never wholeheartedly endorsed the deployment of troops to Russia, and as public opposition grew and the military logic evaporated after the armistice, the Borden government turned decisively against it.

The initial reasons for the invasion varied, from stopping Turkey, Germany’s ally and Russian neighbour, from capturing the rich Caspian Sea Baku oil fields, to preventing the Germans from seizing the huge amount of war matériel the Allies had shipped to the Russian ports of Archangel, nearby Murmansk, and Vladivostok on the Pacific. Most importantly, the Allies wanted to support the anti-Bolshevik forces, then engaged in a civil war against Lenin’s Red Army. These Whites had pledged to reopen the Eastern Front and thus forestall the transfer of German divisions to the Western Front, a move which Allied leaders feared could cost them the war.

But after the armistice, the invasion became a half-hearted intervention in the Russian Civil War and ended in disarray in 1920, although Japanese troops remained for another two years. For Canada, which lost seven soldiers in batde during this adventure, the largest and most controversial deployment was the dispatch of 3,800 troops to Vladivostok. Announced by acting prime minister Newton Rowell on Aug. 15,1918, this contribution was more notable for the fighting between Borden (who was in

London for meetings of the Imperial War Cabinet) and his cabinet in Ottawa than for any subsequent military action.

By the time Rowell spoke, two unannounced Canadian troop movements to Russia were already well underway. The first began on Jan. 14,1918, when 41 volunteer officers and NCOs reported to the Tower of London to be part of what they were told was a “hazardous enterprise in a foreign theatre of war.” Eventually, they ended up in Baku while hundreds of other Allied troops, including 16 Canadians, landed at Murmansk on June 23 to secure the war matériel that so worried the War Office.

Meanwhile, the nearly 500-man Canadian artillery brigade, part of which fought at Tulgas, had arrived at Archangel on Oct. 3, 1918 and fought its first battle just two weeks later, holding more than 3,000 Red Guards at bay. Following the Armistice Day Tulgas engagement, the Bolsheviks harassed the Allies throughout the brutal Russian winter, but the Canadians were undeterred. One four-day skirmish in January 1919 cost two Canadian lives and was fought in cold that went down to -43°C. One of the dead was Capt. Oliver A. Mowat of Campbellton, N.B., who was mortally wounded while directing fire from a belfry. After the battle, Mowat’s body was smuggled back to Canada by his men and interred in his hometown.

In Murmansk, meanwhile, the Allied force had grown to almost 15,000, including another 100 Canadians under Col. John Leckie of Vancouver. In mid-February, fully two months after the armistice, these Canadians saw their first major action. Led by Leckie and other Canadian officers, a 600man mixed Allied force mounted a surprise attack, in -40°C weather, that seized the town of Segezha, finding war matériel and rail cars manufactured in Nova Scotia. Canadian-manufactured weapons were also discovered two months later when Maj. Peter Anderson of Edmonton led 104 men in a surprise assault on a town 32 km south of Segezha.

At 3,800 men (and one nursing sister), the Canadian Siberian Expeditionary Force was clearly a major military initiative, compared to the some 600 men that Borden, apparently without discussion with cabinet in Ottawa, authorized for Baku, Murmansk and Archangel. From the first request for troops, ministers were wary of undertaking

an offensive policy in Russia. Many Canadians had cheered the fall of the autocratic czar and would oppose sending troops to a Russian sideshow. But cabinet was swayed by the prime minister. “It will be of some distinction,” he told them, “to have all British forces in Siberia under the command of a Canadian officer.” The officer in question, Brig.-Gen. James H. Elmsley, would be able to appeal a command from the Allied commander-in-chief in Siberia, Japanese Gen. Kikuzo Otani, to the War Office in London. Even more importantly

for Borden, who had lobbied during the war for Canadian command of Canadian troops, the War Office could not give orders to Elmsley without the approval of the Canadian government. Finally, Borden told cabinet, the expeditionary force would bring the nation sufficient prestige to help businessmen secure Russian timber, fishing, mining and farming concessions. Cabinet reluctantly approved, and on Oct. 11 Elmsley sailed with the first contingent of troops.

None of Borden’s arguments survived the Nov. 11 armistice. Eleven days afterwards, agriculture minister T. A. Crerar, on behalf of his cabinet colleagues who were against intervening in another nation’s affairs, and were simply tired of war, declared that he was “absolutely opposed” to sending troops to Siberia. Borden telegraphed Ottawa, pledging that the troops would not be used offensively, and reiterating the prestige and economic arguments. Three days later, with the normally pro-Borden Toronto Globe editorializing against the venture, and Opposition MPs like Andrew Rory McMaster saying he’d rather Canada never sell another mowing machine “than that the blood of a single Canadian lad be spilled in vain,” cabinet telegraphed Borden, telling him that public and political support for the CSEF had evaporated. Borden’s response from across the ocean warned of harm to Canada’s reputation and then, impatient with the to-ing and fro-ing, instructed cabinet to “dispose of the matter without further reference to us.” So cabinet reversed itself and decided to let Elmsley and the first 1,100 Canadians remain in Vladivostok and even to allow 2,700 more, now en route, to continue—but to deny them authorization for any offensive military action.

Although it took until April 1919 for the War Office to finally approve the withdrawal of the last Canadians from Russia, even Borden had by then turned against Allied intervention. In February, the White Russians angered him by torpedoing a peace conference with the Reds that he had proposed and at which he was to have been the chief Imperial delegate. Borden resisted a lastminute plea from the British secretary of state for war, the rabid anti-communist Winston Churchill, who rightly believed that Canada’s decision to withdraw its troops was but a harbinger of the collapse of the Allied efforts to destroy the “foul baboonery of Bolshevism.” Commented Borden: “Russia would have to work out her own salvation,” without Canada’s interference, for “it would be impossible to persuade the Canadian Parliament to undertake any active operations however limited.”

Some 85 years later, then prime minister Jean Chrétien might have had exactly such thoughts in mind when he refused to commit Canadian forces to the U.S.-led invasion of Iraq. IJI 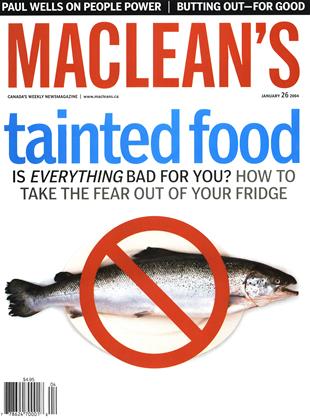