So how did you enjoy turning 70? I noticed that your birthday, Sept. 21, was the eve of the autumn equinox. It was an unusually warm night in Toronto. As the tail end of summer slipped away, I biked down to a bar that was hosting a tribute in your honour—as you know, these events were mushrooming all over the world, in towns like Edmonton, Copenhagen and some place in Australia called Toowoomba. We were a large crowd packed

into a small room. The faithful included a woman who shares your birthday, and claims to have shared your bed many years ago in Greece. A sweet old lady who drove up from Niagara Falls looked a little lost. She said, “I thought there would be poetry readings.” Instead, a band played the album I’m Your Man, with a different singer stepping up to tackle each cut. One after the other, like valiant suitors attempting to draw the sword from the stone, they tried to do you justice. Most tried too hard. But a young chanteuse called Lily Frost crooned one of your early songs, Hey, That’s No Way to Say Goodbye. She was almost cooler than thou, Leonard. Immobile in Chinese silk, her dark hair in a retro coif, she had a loungy voice like Julie London, and cut the tempo of the lyrics in half, making young Leonard sound like old Leonard. You would have liked her.

During our first interview, for the release of The Future in 1992, I’ll always remember you telling me there’s no rhyme for orange— “Some people say it’s ‘door hinge,’ but that’s not right.” (I was later dismayed to find you said this to others, but I forgave you: doing media is a promiscuous business.) We met again for the release of Ten New Songs in 2001, sat in your sweltering house in Montreal during an August heat wave. Driving down from a lake, I’d brought raspberries from a roadside stall, which you received with reverence. Later I visited your home in Los Angeles, where you served me lentil soup and countless tiny glasses of red wine. And with your lovely partner, Anjani Thomas, you introduced me to an Irish drinking song about a guy who gave away his wife.

When I asked if you’d do an interview

for your new album, Dear Heather (out on Oct. 26), you suggested we get together and talk off the record about doing interviews. Was this a new approach to the art of promotion? I drove down to your house in Montreal, with more raspberries, which you swore were the finest you’d ever laid eyes on. We sat at a table by an open window as people walked by on the sidewalk. Over wine and Indian takeout, you told me you didn’t want to promote Dear Heather. You said it’s unlike anything you’ve done, it speaks for itself, and that there’s nothing more to add.

elegiac, your new CD finds you rappelling from the tower of song to kneel at the altar of poetry

You also confessed that, years after your depression mysteriously lifted, you’re enjoying life more than ever. To go on about that in a world ravaged by unspeakable misery just didn’t sit well with you. Journalists like me would inevitably quiz you about Bush and the war, and the business of your libido turning 70. And they’d all ask, “Who’s Heather?” You’ll recall that I tried to change your mind. I dealt the Canada card, reminding you that, with Trudeau gone, you’re the last cool international icon among your generation of Canadians—someone we’ll forever associate with a Canada when everything seemed possible, when a bohemian intellectual could be prime minister and a Montreal poet could be world famous. By

“doing publicity,” you wouldn’t just be promoting a record, you’d be breathing a Zen glow of warmth and wisdom into the faint embers of this thing called Canadian culture. Or something like that.

Anyway, it was a beautiful evening. But as the weeks passed, you kept your resolve to decline interviews. Hence this letter. If you won’t talk about Dear Heather, I will.

You’re right, it is a departure, one that finds you rappelling from the tower of song to kneel at the altar of poetry. Even more hushed and meditative than Ten New Songs, it’s an elegiac album, one that shows you reconnecting with your poetic roots. The opening track, Go No More A-Roving, is a Byron poem set to music—a lover’s farewell to tomcatting through the moonlit night because “the heart must pause to breathe / And love itself have rest.” It’s dedicated to your ailing mentor, Irving Layton—one of a Montreal triumvirate of poets you’ve honoured on the album. To a Teacher is dedicated to A.M. Klein (1909-1972), with lyrics plucked from your own 1961 book, The Spice-Box of the Earth. And with Villanelle for Our Time, you recite some inspirational verse penned by your former McGill professor F.R. Scott—“From bitter searching of the heart... we rise to play a greater part.” If you were being interviewed—but you’re not—the song that a journalist would pounce on is Because of awry, self-deprecating ode. If you don’t mind, I’ll quote it in full; otherwise it would be like retelling a joke and omitting the punchline:

Because of a few songs Wherein I spoke of their mystery,

Women have been Exceptionally kind to my old age.

They make a secret place In their busy lives And they take me there.

They become naked In their different ways and they say,

“Look at me, Leonard Look at me one last time. ”

Then they bend over the bed

And cover me up

Nothing is quite so tender as the ironic infancy of old age. Your words are cradled in the spare plucking of a thumb piano, and swathed in Anjani’s layered vocals—a vapour trail that soars into the foreground with that siren chorus, “Look at me, Leonard.” It sounds like an angelic choir of every girl you’ve ever loved. Your generosity here is palpable. The two women on the album— Anjani Thomas and Sharon Robinson (your collaborator on Ten New Songs)—toured with you as backup singers in the ’80s. Now they work with you side by side, sharing lead vocals and several songwriting credits.

Your own voice on the album is like heavy parchment, with a vellum whisper of vibrato. With every record you seem to lower your centre of vocal gravity, as if engaged in some kind of sonar parsing of the depths.

I know you work on a computer screen, but in your timbre one can feel the weight of words on paper, what you like to call the “blackened pages.” Dear Heather is full of letters, including one called The Letters, a melancholy tale of unrequited correspondence that finds its mark years after it’s sent—“you press them to your lips / My pages of concern.” Then there’s the title song, a minimalist plea to the enigmatic Heather. You ask her to walk by you again, her “legs all white from the winter.” And you repeat the same five lines over and over, until you start to spell out the words... letter by letter.

In the slow waltz of Undertow, riding the gentle swell of a saxophone, you sing of “a chill in my soul / And my heart the shape / Of a begging bowl.” And in the hypnotic There For You, you unwind a skein of bitter romance: “I see my life / In full review / It was never me / It was always you.” There’s enough lament for lost love on Dear Heather that it makes me wonder if it’s a breakup album. But in a sense, they’re all breakup albums,

aren’t they? Whether you take us to the end of love, or the end of time, you like to dwell on what you once called “the crack in everything / That’s how the light gets in.” Illumination and Armageddon joined at the hip.

Speaking of which, you devote one number, On That Day, directly to Sept. 11—“that day they wounded New York.” You acknowledge that “Some people say / It’s what we deserve / For sins against g-d / For crimes in the world... Our women unveiled / Our slaves and our gold.” Then you offer a nonpartisan shrug worthy of Trudeau, saying “I wouldn’t know / I’m just holding the fort.” There’s a sense of campfire corn to this modest requiem, as you frame the lyrics with the simple twang of a Jew’s harp. I’m reminded of your 1992 anthem Democracy— again you spelled out a stubborn centrism of the hearth: “I’m neither left or right / I’m just staying home tonight / getting lost in that hopeless little screen.”

Can’t say I blame you. Dear Heather sounds like the older, wiser music of a man who’s given up a-roving. Yet this is your most avantgarde album, riddled with playful deconstruction. In the languid meditation of Morning Glory, words like “censorship” and “evaporation” drift, disembodied, through pools of beatnik jazz. But you also offer a couple of bucolic folk songs, Nightingale and The Faith—lilting airs that sound so traditional it’s hard to believe you wrote them.

In case you haven’t noticed by now, Leonard, this is not a review; it’s a fan letter. And why not? You’re 70, and you’re still out there, living up to your mentors, to Layton and Klein and Scott. You become more blithely immune to the mainstream with each passing year. Yet you stay in the game. You’re preparing a new collection of poetry, Book of Longing. Your music still makes its way into the world (Wim Wenders used two of your songs to deliver the epiphany at the end of his new film, Land of Plenty.) Famous yet strangely immune to celebrity, you spent years as a monk on Mount Baldy in California. Then, in 1999, you came down from the mountain, announcing you were “back on Boogie Street.” Lately you’ve been rediscovering Montreal. You say you’ve lost count of the number of times you’ve sat at your desk and sketched the gazebo in the park outside your window. As for the songs, you get by with fewer and fewer brush strokes, and feel no need to explain them.

But still, I want to know. Who’s Heather? fl] 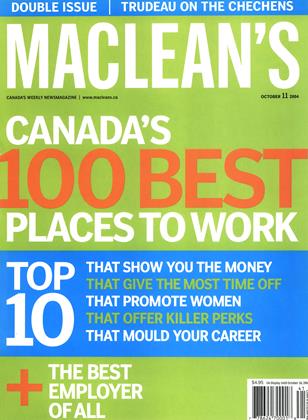