HERE’S HOW THE EXCHANGE GOES. Journalist asks ranking federal official about the implications of the U.S. presidential election for Canada. Politician (or aide or bureaucrat) narrows eyes and shoots back a look that says, “You don’t seriously believe I’m going to get suckered into that one, do you?” Then, if the reporter waits patiently for the initial panic to subside, comes the stock reply. Along the lines of this one, from Montreal MP Marlene Jennings, the Prime Minister’s parliamentary secretary for Canada-U.S. affairs: “We have a great relationship with the U.S., no matter who is in power, whether the Senate or the House

is dominated by Republicans or Democrats, regardless of the politics in the Oval Office.”

The thing about this anodyne answer is that it’s essentially true. Of course Canada-U.S. ties are basically in good shape. Despite trade irritants on beef, softwood and wheat, most of the immense economic relationship runs smoothly. Jennings even dismisses the impact of the occasional harsh word, say, “moron” or “bastards.” On her most recent Washington trip, she says not one of the Canada watchers or Congress people she met even mentioned anti-American remarks by our politicians or their aides as a sore point. “It’s a non-issue for them,” she says.

But such reassuring talk raises a question. If sunny bilateral amity is the status quo, why has Paul Martin declared the need for a more “sophisticated” handling of the relationship-suggesting that under Jean Chrétien it had deteriorated into something less? Why establish, as Martin has, a raft of

new ways to manage U.S. ties, including a cabinet committee and a secretariat attached to the Prime Minister’s Office? Exactly what he hopes to accomplish is not clear. The main problems-including beef and lumber-are the result of entrenched U.S. interests that are not likely to be influenced much by new Canadian government structures.

The personal side of politics may matter more. While nobody in the PM’s circle will hint at a preference, there’s good reason to expect that Martin would bond more readily with John Kerry than George W. Bush. Martin and Kerry are not acquainted, but both are rich eastern liberal Establishment Catholics. And Kerry’s economic policy guru is Robert Rubin, with whom Martin forged a friendship when he was Chrétien’s finance minister and Rubin was Bill Clinton’s treasury secretary. So watch for Rubin to emerge as a toplevel link between Ottawa and Washington if the Democrats triumph. JOHN GEDDES 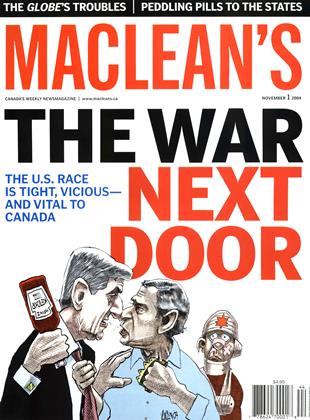