GOALTENDING analogies are unavoidable when Ken Dryden, federal social development minister and hockey legend, is being discussed. He offers one himself to explain how he works. “I like to get into the action, and then I love to get out of the action to try to make sense of it,” he says. “That’s exactly what a goalie does.” This week, he will be in the fray. As the cabinet minister charged with delivering on Paul Martin’s election promise to launch a national child care program, Dryden will meet in Ottawa with the provincial ministers he must persuade to sign on to the ambitious plan. He’s done his advance work—quietly courting key provincial politicians, building support among early-learning experts, and using a report issued by the Organization for Economic Co-operation and Development, which slammed the patchwork state of daycare in Canada, as a perfect chance to publicly tout his solution. To resort to another rink reference, Dryden seems to have the angles covered, just as he did when he guarded the net for the Montreal Canadiens.

But how this game will unfold is far from certain. Dryden contends there is a consensus on the need for a government push into child care, on the scale of the great state expansions into public education and health in past eras. He has brought long-time lobbyists for publicly funded daycare into Ottawa’s corridors of power as never before. His chief of staff, Sandra Griffin, was plucked from her job as executive director of the Canadian Child Care Federation. Even last week’s timely OECD report, which looked like an authoritative critique from abroad, was in fact largely based on research commissioned by Dryden’s department. John

Bennett, the Paris-based project manager for the OECD review, said he “relied to a great extent” on that detailed background study written by Canadians, including Martha Friendly, coordinator of the University of Toronto’s Childcare Resource and Research Unit.

So if there is a new sense of urgency around child care, the federal Liberals have played no small part in bringing it to the fore. The policy Dryden is pushing is just what Griffin, Friendly and their allies have been urging for years: high-quality, heavily subsi-

dized daycare, designed to make it easier for more mothers of preschool children to work outside the home. They point admiringly to Quebec’s universal system, launched in 1997 as $5-a-day daycare, and hiked this year to a still bargain-priced $7 a day. The premise behind both Quebec’s program and the policy Dryden hopes to roll out nationwide is that in the era of the two-income family, daycare must become as fundamental a part of what governments deliver as hospitals and schools are. Dryden admits it will take

years to achieve that goal, but he’s certain about the direction. “The Quebec system offers the right ambition,” he says. “To me, that’s the model.”

But if Quebec offers inspiration to some, to others it demonstrates pitfalls. The system is enormously expensive, costing the province $1.3 billion a year—and even that hasn’t been enough to eliminate waiting lists for subsidized spaces. And not every expert regards the experiment as a ringing social success. Pierre Lefebvre, an economics professor at the Université du Québec à

Montréal, published an evaluation of the program earlier this year that found it unfair to families that don’t want daycare and so miss out on a generous tax-funded benefit. “Families with young children who choose to care for their children themselves,” Lefebvre wrote, “are not treated equally.” Even among parents who use the $7-a-day care, he discovered inequities, reporting that “a very large majority of children in subsidized child-care services are from families in the upper income categories.” (He didn’t explore why low-income

parents are less likely to use the system.)

Dryden tends to dismiss such problems as distractions that will be sorted out once the politicians take the big plunge. He expects to reach a deal with the provinces in time to get the program into the next federal budget, likely in February, and see funding start flowing in April. The Liberals have promised to spend $5 billion over five years. That’s nowhere near enough to replicate Quebec’s program nationwide, but it’s real money. Joanne Crofford, Saskatchewan’s community resources and employment minister, estimates her province’s share should boost its child care spending by about $30 million from $23.5 million now. “We’re incredibly excited,” Crofford says. “We have not had these kinds of resources ever.”

Dryden maintains the goal can be reached incrementally

Social Development Minister Ken Dryden brings unique credentials to political life. Not only is he a Hockey Hall of Famer and bestselling author, but the rookie Toronto MP has also been Ontario youth commissioner and president of the Toronto Maple Leafs. He spoke with Maclean’s Ottawa Bureau Chief John Geddes in his Parliament Hill office.

How much support do you think there is for your universal child care plan?

This is something that people want to do. We need to do a lot better in child care across the country. The public knows it. That’s what’s going to drive it in the end.

That hasn’t come up much. People know we are going to have to work together on this if we’re going to get where we need to go.

How much will it ultimately cost?

In any of these things, if you projected ahead, and saw what the demands would be, you would say, “How can we ever get there?” But if it’s the right thing, then incrementally you get there.

Why not make sure low-income kids are getting decent care before extending benefits to better-off families?

We have a long way to go. On the path from here to there, where do you put the emphasis? That’s part of the discussion. But we

need to think national system, not bits and pieces.

Child care is part of the way we live. It is part of a national expectation. We’re where we were on education 100 years ago, or health care 40 years ago.

What about all those moms, and some dads, who want to stay home with young children for a few years, or work part-time? They might need better nursery schools, or part-time services, not daycare.

It isn’t that it’s got to be five days a week, between the hours of 8:15 a.m. and 3:15 p.m. That’s not the essence of my analogy to education. The essence is that child care is central to the development of the kid and it has to be there for every kid.

Does being a sports celebrity help in politics?

Would you prefer legend?

No, no, no. Well, I prefer legend to old-timer, but only marginally.

But how does your fame make things different for you?

It’s not part of the way I function. It’s not interesting. Having the chance to do certain things that may come of it, that’s great. One of the great things about having played hockey is that you get invited everywhere. You can pick your spots. You can decide, “I’ve never been to St. Anthony, Nfld.-that would be pretty interesting.”

Numbers like those go a long way to explain why Dryden doesn’t expect much resistance to the feds forging a new role in what is provincial jurisdiction. This fall, money is talking. The premiers have accepted new deals with Ottawa, first on health and then, last week, on boosting equalization payments to have-not provinces (despite an angry dissent from Newfoundland Premier Danny Williams over offshore energy revenues). Winning over the public on child care, though, will be a separate challenge. According to Statistics Canada, out of about 600,000 mothers whose youngest children are between 3 and 5 years old, 48 per cent work at full-time jobs outside the home, but 31 per cent stay home, and 21 per cent have part-time jobs. What sort of national system might satisfy such a diverse range of families with preschool kids? “More and more parents are working part-time hours and really don’t want or need full-time daycare,” says Donna Mallet, executive director of Canadian Mothercraft, an Ottawa non-profit service that provides full-day child care, but increasingly also offers parttime services, even on weekends or overnight.

Ideas are being floated that go beyond the Quebec model. Clyde Hertzman, a University of British Columbia professor who specializes in childhood development, says one strategy would be to create a network of “neighbourhood hubs,” with daycare

centres as core tenants, but also providing family drop-ins, parental support, recreation, and early detection of childhood health and learning problems. Dryden won’t go into that sort of detail, arguing the system must be allowed to evolve into what parents want it to be. One sign of his flexibility: he’s in no hurry to fulfill the Liberal campaign vow to pass a law, along the lines of the Canada Health Act, setting out the child care prin-

IF THERE is a new

sense of urgency around child care, the Liberals have played no small part in bringing it to the fore

ciples provinces must meet to get funding. “Looking at how we have created systems in the past—education, health—those things weren’t preceded by legislation,” he says.

He keeps coming back to those grand historical achievements. But education and health are both straining government budgets these days. Is the time really right to try erecting a costly new pillar of social policy? Dryden certainly thinks so. When he dives into the issue with his provincial counterparts this week, it should become clearer how widely his view is shared. At which point Dryden might choose to pull back a little, the way he says he likes to, and assess which way the action on child care will go next. I?] 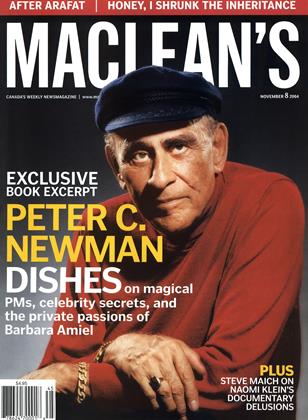