WHEN I HEARD the news of Pierre Berton’s passing, I reacted with grief, disbelief and dismay. Grief because he had been such a loyal friend; disbelief because he was the essential curator of the Canadian Dream; dismay because he is quite simply irreplaceable. Berton, who died from heart failure last week at 84, spent a dizzyingly productive lifetime turning our history into marketable and often magnificent prose. In the process, he not only took the best shot at defining Canadians (as anyone who can make love in a canoe) but caught the poignant mystique of our national identity: “The country is still an unknown quantity, as elusive as the wolf, howling just beyond the rim of the hills.”

ety, instead of the semi-subversive emotion it had once been considered. He did this by recreating Canadian history as a heroic pageant worthy of a significant nation instead of a self-governing colony, as we were dismissively labelled.

Berton’s approach to history had a knack for the unexpected twist. In his book Marching As To War, he argued convincingly that counter to their image of themselves, Canadians have never been citizens of a peaceable kingdom. He made the case that in the four wars we fought between 1899 and 1953—in South Africa, twice in Europe and in Korea—Canadians became involved because they wanted to be. The politicians declared war to follow the will of the people, not the other way around. Such controversial insights categorized Berton as more than a gifted storyteller. He gained equal fame as a TV host and interviewer, managing editor of this magazine, and as a frequent accessory-before-the-fact of countless worthy causes. In a land where most of its citizens did their best to keep quiet, Berton believed in making noise. In his political heyday, there were few public petitions championing liberal or left-wing ideas that didn’t lead off with his name and financial

support. He hesitated not a moment before pledging his loyalty and dollars to the most obscure of humanitarian crusades—over his portable telephone while lounging poolside at his country estate in Kleinburg, Ont.

That was where he found his greatest solace, among his extended family and especially with his wife, Janet, who was his anchor. The bluster that marked his daily passage through a crowded lifetime was just that: bluster. He was a tough hombre when it came to writing or editing, but treated nearly everyone who came in contact with him kindly and generously, unless they were public relations flacks bearing self-inflated messages. His body language could be deafening. Before the heart failure from which he suffered in his final years reduced his energy, his strident physique and his habit of emphasizing his convictions with

a voice that must have frightened every stray moose for miles around left little room for argument. He was a large man with large appetites: the Bigfoot of CanLit. Passionate and opinionated, he was unmarked by the gloomy introspection of his calling. His Yukon heritage produced not only some of his best books (Klondike, The Mysterious North, Drifting Home and the current Prisoners of the North) but kept him from becoming a full-fledged member of the Toronto literati and their indulgent ways. That was what kept his focus so clear, and his prose so accessible.

The last time we appeared together was at the Vancouver International Writers Festival in the fall of 1998, when we celebrated the merits of popular history. He walked in with the aid of a cane, appearing drawn and debilitated. But once we started declaiming the glories of our trade, he came alive, the energy visibly flowing back into his body, like some proud young buck cakewalking in the sun. “The whole secret,” he told the audience, “is to make it read like a novel.” That, of course, was exactly what I—and most of the non-fiction writers in the hall—had been trying to do, but we lacked his panache and self-confidence. If he had written music

instead of prose, his scores would have carried instructions to the orchestra that they play “bravura with abandon.” (Subtlety was not his strong suit.)

After our talk, Pierre and I had sandwiches at the Hotel Vancouver. “It’s now called the f—ing Fairmont,” he declared, in the disparaging tone appropriate to any historian of the CPR when the railway’s hotel chain acquired an American firm and took its name. “We have to preserve the fabric of our nationhood through things like medicare and the gun laws, and all that stuff that is different from the Yankees. We are different. Our background is different. Our history is different. The geography is different. We have to sing our own songs and create our own heroes, dream our own dreams or we won’t have a country at all.”

What made Berton’s 50 books so valuable and so readable was his eye for anecdotes, those tidbits of observable trivia that illuminate human character. His description of the shameful banishment of21,000Japanese-Canadians from their homes and businesses on Canada’s West Coast during the Second World War began not with a statistical summary of their financial losses, but with the story of Toshiko Kurita, a Japanese woman who was quietly walking to her suburban home when a white man came up to her and spat full in her face.

Berton was our indispensable national mentor by popularizing our sleepy past and infusing it with the retroactive ring of authenticity. He not only survived the sting of his academic critics, but bested them. Berton understood better than they that history is made up of personal memories refined, a sequence of encounters between character and circumstance that requires the art of a storyteller for maximum impact. He was driven by the realization that Canada will always have more geography than history, but we cannot learn to appreciate the former unless we begin to better understand the latter. This will be his legacy.

Following that long-ago encounter in Vancouver, 1 knew that the wellspring of my friend’s talent would never run dry: that it might die with him, but not before him. Now he is gone, but his books will outlast him. Let us celebrate the magnificent scope and unparalleled relevance of his accomplishments. We shall not read his like again. fül

TAKING THE MEASURE OF THIS PROLIFIC, PATRIOTIC MAN

HE SOLD MILLIONS of books, made Canadians want to read stories about our past, and smoked marijuana for several decades. To say Pierre Berton had a full and varied life is an

From childhood in Dawson City to status as a national icon

News career: Early on he aspired only to be a reporter, and went on to stints at the Vancouver News-Herald, the Vancouver Sun, Maclean’s (where he became managing editor at just 32) and, later, the TorontoStar. He was a panellist on Front Page Challenge (19571995), had his own TV show for a decade, and hosted many specials. Books: Best known to generations of Canadians as the person who popularized our history. Starting with The Royal Family (1954), he wrote 50 books; the last one, Prisoners of the North, was published this year. Others include: The National Dream (1970), Drifting Home (1973), The Dionne Years ( 1977), The Invasion of Canada( 1980), Flames Across the Border (1981), Vimy (1986), The Arctic Grail (1988), The Great Depression (1990), The Great Lakes (1996).

Honours: He won the Governor General’s Awards for The Mysterious North (1956), Klondike (1958) and The Last Spike (1971), and the 1960 Stephen Leacock medal for Just Add Water and Stir (1959). In 1986, he was made a Companion of the Order of Canada. Controversy: In 1963, Maclean’s cut short his return as columnist in the wake of a public outcry over a piece called “It’s time we stopped hoaxing the kids about sex.” His 1965 book The Comfortable Pew attacked the Anglican Church. And in October he was on

CBC TV demonstrating how to roll a joint. 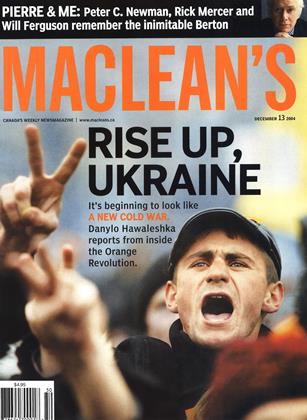