IN THE BEGINNING, circa 1966, there was the Brazilian Carnival Ball. Originally a church-basement party for homesick Brazilians who longed to warm up the Toronto winter, it grew into a prominent charity fundraiser by the late 1980s. “We were having so much fun,” founder Anna Maria de Souza says with a conspiratorial smile, “we felt guilty.”☺ She couldn’t have imagined that her party—today a standard setter for the charity ball circuit—would inspire dozens of copycat events in Toronto and across Canada, from glitz fests like Victoria’s Visions Gala and Venetian Ball in Toronto to funky fashion affairs and more informal new

De Souza and company did not, of course, discover the charity ball; that’s been around for well over a century, originally as an offshoot of British society’s debutante ball. But they did find that, with its splashy, sexy extravagance, a ball could draw a lot of

attention, and that, in turn, attracted corporate sponsors—along with their big bucks.

While there’s no official tally of Canada’s fundraising galas, the consensus is that there are now more

than ever. “There used to be one major gala a month in Toronto,” says Harold Zadeh, publisher of Luxury magazine, who makes a point of attending as many as he can. “Now there are two every weekend.”

In Vancouver, balls have become part of the fundraising landscape alongside golf tournaments and marathons. In Calgary, the high season for charity events lands in the fall, when it’s not uncommon to see eight per weekend, says event producer Stephen Carter. “It’s super-competitive,” he says. “Those who don’t have a defined target market with clear objectives and a solid volunteer corps are not going to make it.” It seems there’s a charity ball for each

slice and every dice of society. There are hospital balls and balls to battle diseases, such as the Canadian Cancer Society’s très chi-chi Daffodil Ball, a Montreal must-attend that last spring counted Brian and Mila Mulroney, and Justin Trudeau with girlfriend Sophie Grégoire among the dancefloor crowd. There are galas that target particular communities, such as the Dragon Ball, aimed at Toronto’s Chinese population, and the Powerball for the avant-garde arts types. Different religions are tapped: B’nai Brith events look to Jews, while Catholics flock to the Cardinal’s Dinner.

The fashion world creates some of the most anticipated affairs. Becky Scheer of AIDS Calgary Awareness Association, which runs the Calgary Cares ball and fashion show, says, “This is an event where you can see the bluehaired lady in pearls standing next to a drag queen and they are talking over a martini.” Then there are industry-specific balls, such as the Yves Landry Foundation gala attended mainly by people from the automotive industry (Mila and Brian were there, too).

Galas designed specifically for a younger crowd are among the newest events crowding the social calendar. Rethink Breast Cancer is a charity that aims, in both its awareness campaigns and fundraising efforts, at the Friends generation. “The traditional, 1,000-person sit-down dinner is not how someone in their early 30s or late 20s wants to spend their time,” says Alison Gordon, the group’s marketing director. In June, the charity hosted 700 at a Bollywood-themed evening in Toronto’s posh C Lounge. “We told people, ‘Wear bold colours and show some skin,”’ Gordon says. A love

psychic was there, as was an artist who painted henna tattoos on guests’ hands and feet.

And the $60 ticket price opened it up to a younger, poorer crowd.

But like the Brazilian Ball, Rethink is beginning to see others nosing in on its chosen demographic. The Masquerade Ball, for example, which raises money for United Way, drew a solid crowd of urban hipsters in late October. “Let’s just say when we started, there were not a lot of breast cancer events targeting the younger demographic,” says Gordon. “Now, four years later, you’re seeing a lot of innovative fundraising events.”

With the landscape so crowded, even the established galas are feeling the pinch. In Toronto, it’s become tough to get a date on the social calendar, says Sheilagh Johnson, executive director of the Children’s Aid Foundation, which held the Teddy Bear Affair, a $700-a-ticket soirée for 1,000 on the weekend of the U.S. Thanksgiving. “This was not our preferred date,” Johnson says. But a year ago, when the foundation booked its spot, that was the only night available at its chosen venue.

Even the extravagant Brazilian Ball, which

‘THERE used to be one major gala a month in Toronto. Now there are two every weekend,’ says one frequent guest.

is now held in the spring, has been affected by the competition. “We’re all going after the same people. Ticket sales are slower this year,” says Edna Kempster, the ball’s longstanding executive director—although founder de Souza insists, “We always sell out.”

The reason the Brazilian Ball will sell out, even at $12,000 for a table at the back of the room, is that de Souza and her team of volunteers have impeccable contacts among Corporate Canada. Tony Fell, Bay Street’s preeminent deal maker, and his wife Shari are the 2005 honorary chairs. “What’s important is to have the right people involved,” says Linda Goldsack, the ball’s co-chair, “people who can make phone calls, who can sell tables to colleagues at $60,000 each.”

To draw the corporations that buy the pricey tickets, top-grade galas are getting more elaborate—and expensive. “It’s important to deliver something for the donors,” says Donna Trella, executive director of Reach for the Rainbow, a charity that helps disabled kids go to summer camp and that late last month hosted the Crystal Ball. Guests—1,650 of them, at $600 a pop—were greeted with flutes of champagne, entertained by jugglers and mimes, and serenaded by strolling musicians in berets—and that was before the five-course dinner and dancing to ’70s sensation Blood, Sweat & Tears. This is now standard fare at the high end of the circuit, the kind of evening corporate big wigs can view as an investment in schmoozing clients.

Trella recognizes that people who pay to attend her gala aren’t simply being altruistic. One of the Crystal Ball’s hallmarks is its extensive—and expensive—live and silent auction. This year, more than 200 prizes donated by corporate sponsors were on display, including leather Roche-Bobois furniture, an outdoor luxury grill kitchen and a $25,300 inflatable Zodiac boat. Top prizes included a $34,000 Scottish golf getaway and several shiny BMWs. For corporate donors, Trella says, the decision to support a charity is as much a PR choice as a philanthropic one, so she tries to provide marketing opportunities— hence the elaborate displays and a glossy magazine to showcase the donations. “We’re always looking for ways to offer donors visibility so they get publicity and marketing, as well as a philanthropic push,” she says. And, of course, it’s all for a good cause. I?]

With files from Brian Bergman and Ken MacQueen 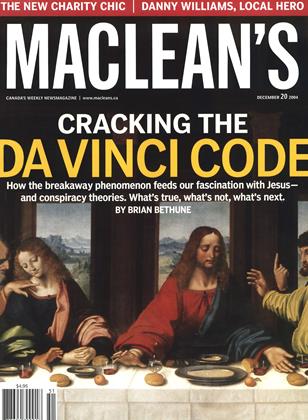