A WONDER OF THE WORLD DONALD COXE December 27 2004

AFTER A SPLENDID evening spent reading Maclean’s special issue on Canada’s history of innovation, it occurred to me that the editors omitted one uniquely Canadian innovative triumph: models for effective universal public pension plans or social security schemes. The Canada and Quebec Pension Plans are wonders of the pension world. And one critical aspect of their success—investing plan members’ contributions in appropriate vehicles— may be about to attract more foreign attention.

Once again, this story is rooted in the national dualism or internal rivalry that the editors describe as a tradition dating back to John A. Macdonald and Louis Riel. Nearly a century later, Ottawa, under Lester Pearson’s leadership, set out to gain provincial agree-

ment on a national pension scheme. Quebec demurred and announced it was going alone. But, in return for a temporary pledge to vacate the long-term end of the bond market in favour of the provinces, which wanted that space for their own ambitious electricity and highway financing, Ottawa got a deal with the other nine provinces. Quebec’s non was based primarily on its intention to use the pension fund contri-

butions as a gigantic pool of investments for provincial development, including Hydro Québec, then about to engage in the massive James Bay hydroelectric project. The Caisse de dépôt et placement du Québec was created to manage these Quebec funds along with the existing pension plans of the province’s public sector employees. In little time, the Caisse became a national, then international, powerhouse.

Meanwhile, the 1966 CPP rules restricted it to investing in 20-year bonds issued by the provinces in proportion to their contributions to the fund. As a straight subsidy to the poorer provinces, all provinces paid the same rate on their CPP borrowings, a rate tied to long-term government of Canada bonds.

A review of the two plans seven years later showed that investment returns for the Quebec Plan were running far ahead of the national plan. As part of its deal with the provinces, Ottawa had ceased issuing longterm bonds. That meant that by 1973 just about the only ones left to set the CPP borrowing rate were a tiny issue of three-per-cent perpetual bonds—a Depression-era curiosity whose rate was as representative of1970s-era bond yields as were the comparable prices of homes and cars. The CPP Advisory Committee drew this absurdity to the attention

of then-health and welfare minister Marc Lalonde. He got Ottawa back into the longterm bond business—and CPP returns soared. (Full disclosure: your columnist was a member of that advisory committee.)

But over the years, the CPP was still at a disadvantage compared with the QPP because of its inability to invest in equities. That handicap was resolved after Paul Martin became finance minister and created the CPP Investment Board. Under John MacNaughton’s leadership, the board has set up a sophisticated program to earn strong returns for plan members.

Virtually all global social security schemes outside of Canada rely on lumping in plan members’ contributions with general tax revenues, so pensioners’ claims are just part of long-term government liabilities. Those programs are in desperate shape, and experts agree that by 2020 or earlier, the ravenous demands of such unfunded plans will dominate their economies and financial markets. The only disagreement is when those programs either become masters of their societies—or go bankrupt. Italy, France, Germany and Spain are leaders in this worldwide march to the abyss.

The U.S. will face the same problem two or three decades later. Because its scheme holds only Treasury bonds, its returns are abysmal. In 1989,1 testified before the U.S. Senate Finance Committee about Social Security’s funding problems. Afterwards, the hearing’s chairman, legendary New York Democrat Patrick Moynihan, chatted with me about the “illusion” that the huge chunk of the national debt held in the Social Security Trust Fund, which was modeled on the CPP fund, was a genuine sustainable pension fund. Over time, Moynihan said, the best returns for pension funds would have to come not from mid-term government debt (five years or so, the kind held for Social Security) but from stocks.

We agreed that the ideal program would involve equity ownership, but understood the argument that the government could then control corporate America. Right-wing opponents screamed that this would be a “Leninist” takeover. This is not a problem for CPP and QPP because they, unlike most foreign plans, don’t restrict themselves to local investments.

Unless changes are made, the U.S. pay-as-you-go Social Security system is projected to run out of money in 2042. The picture is rosier north of the border, where past increased CPP contributions and accumulating investment assets are keeping the plan in the black.

legislation permitting younger workers to set aside a portion of their Social Security contributions (really taxes) in personal retirement accounts, which would include longer-term government bond funds (that pay higher interest rates than mid-term bonds) plus equities, using index funds as the investment vehicles. Such an approach wouldn’t let these investors do their own stockpicking, thereby preventing them from participating

BUSH’S plan is not as wise as ours, but given the realities of the U.S. political process, it’s as close as he can get

in takeover bids and other such dating and mating rites of capitalism. He has support from a bipartisan group of experts for this proposal, including the sainted Moynihan, who recommended it shortly before he went to the great welfare state in the sky.

Bush’s plan isn’t as wise as Canada’s programs, which rely on in-house investment management expertise, as opposed to restricted individual choice, to seek out opportunities across an array of asset classes.

But, given the realities of the U.S. political process, it’s as close as he can get to Canada’s successful approach. And he can cite our good fortune in showing why market-based investing generates higher returns, thereby preventing Social Security from taking over the economy, going bust—or both.

The President, because of poor Social Security returns (compared with ours), looks at the future from a deeper hole. As The Economist (h ardly a Bush cheering section) notes, his plan would, in the long run, offer real hope of success. The magazine scorned John Kerry’s demagogic insistence on doing nothing to tamper with the program, which faces doom unless it receives radical surgery. However, few observers think Bush has much hope of getting Congress, deeply divided on this issue, to jump firmly onto “the Third Rail of politics,” as Social Security has long been labelled.

Why has Canada been so successful in innovating where others have failed?

First, because Ottawa couldn’t do it on its own. It needed to get approval from the provinces, an arduous process, and holdout Quebec was able to experiment with a unique funding process that worked.

Second, because Canadians built in review processes, so the progress of the plans was open to public scrutiny on a regular basis.

Third, Canada’s shared secular religion is a faith in major social programs, and faithbased initiatives have a greater chance of success than those born in cynicism or corrupt politicking.

Maybe you don’t agree with these suggested reasons for our strong performance. But give Canada credit for successful innovation—and successful management—of a program that is one of the two overarching challenges facing all governments in this century.

The other, of course, is health care. Oh well, you can’t win ’em all. Iffl 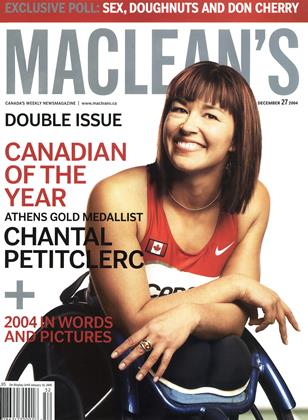