THE U.S. IS NOT TAKING ADVICE’ JOEL SOKOLSKY December 6 2004

The Pentagon’s plans to develop a missile defence shield under NORAD deeply divides Canadian public opinion. Although pressure from Washington on Ottawa to sign on soon has recently eased, Prime Minister Paul Martin still faces a split in his own party over the issue. The matter could come to a vote in the House next year. Should Canada participate? Joel Sokolsky, dean of arts and a professor of political science at the Royal Military College of Canada, is an expert on Canadian defence policy and international security relations. Montreal journalist and writer jean Paré recently interviewed him in Kingston, Ont. Excerpts:

If Canada agrees to participate in a missile defence shield under NORAD, would that be a sea change in our foreign policy?

No, because co-operation with the United States in the defence of North America has always involved an air, aerospace and maritime component. An outright refusal to

participate in this would signal a departure from previous policy. We are not being asked to put anti-missile missiles or radar on Canadian soil. We are being asked that missile defence be integrated into NORAD, just as there are things the U.S. does that are part of NORAD but to which we don’t really

contribute. It makes sense from their standpoint to integrate that into the NORAD system, which already deals with warning and attack assessments, bombers, missiles and, to a limited extent, cruise missiles.

What would the U.S. do if Canada just said no?

That would be a problem, but I don’t expect dramatic consequences. Economic retaliation would affect too many American interests. A refusal would certainly cool our bilateral relations and force Washington to rethink the role of NORAD, but co-operation would continue because it is in the interests of the U.S. to maintain it for air and sea defence. And most of that security cooperation is non-military. It is exchange of intelligence, and co-operation on immigration and security of the border. We are not really being asked to spend a great deal of our wealth to defend North America.

Some think that when it comes to important defence decisions, Canada’s opinion doesn’t matter much.

The U.S. does not need Canada to defend itself—in the case of a major threat, it would do what it needs to. That applies not only to Canada, but to any U.S. ally—it is just the reality of international relations. On issues affecting vital American interests, the U.S. is not taking advice from allies. We are not being treated any differently than other allies by this administration.

You have suggested that Canada should concentrate on a domestic role for the Canadian Forces and reduce overseas commitments.

Yes. We will have to go overseas—the United States regards this as a litmus test. But what we should do is limit our multiple commitments. We don’t have the means. In view of the fact that the government is not going to pour billions into defence, I would do what the national security policy of April 2004 suggests: be selective and strategic.

The reality is, we cannot ever put enough troops on the ground overseas to dramatically affect [other countries’] foreign policy. So this notion that deployment buys us influence is a myth, and it is not unique to Canada. But we have a lot of influence over the North Atlantic fisheries because we can put forces out there to enforce our law. That is in our interest. lil 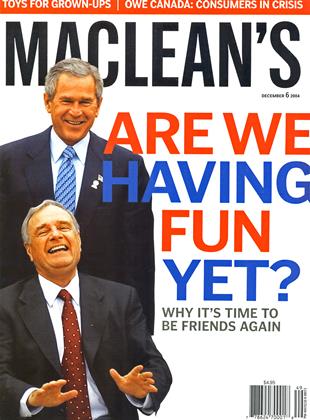