ON THE EVENING of March 12, 2001, Ralph Klein basked in the greatest political triumph of his life. Alberta’s Progressive Conservative premier had just won his third consecutive majority and by the biggest margin yet—74 seats for the Tories, seven for the Liberals and two for the New Democrats. “Welcome to Ralph’s world,” Klein famously intoned after stepping to the microphone to address cheering supporters in Calgary. It was his most pithy, and coherent, comment of the night. During the remainder of a rambling victory speech, Klein sometimes seemed literally at a loss for words, as he struggled to recall the when and where of particular campaign encounters. I looked around the room, which was growing quieter by the minute. Even some Tory diehards were starting to look befuddled, as if to say, is that it?

We now know what many of us then suspected: Klein’s oratory, middling at the best of times, was impaired that night by the generous portions of red wine he had consumed while watching the results roll in. This, and much else, came into the public domain after an incident just before Christmas of2001 when an inebriated Klein strode into a homeless shelter in Edmonton late one evening and got into an angry exchange with some of the residents. When the story broke, a tearful Klein appeared before the cameras, apologized and vowed to do his best never to drink again. Then, as so often happens in the charmed political life of the man everyone here calls Ralph, the public rallied to his side. He became, if that’s possible, even more popular.

What other Canadian politician could have pulled that off? OK, so there’s B.C. Premier Gordon Campbell, who survived a drunk-driving charge in January 2003. He did so by closely following the Klein script: apologize, cry, promise to abstain. But Campbell was not then, and is not now, regarded with much affection by B.C. voters. Contrast that with Alberta, where Klein, 61, has already stated his intention to seek a fourth mandate in the spring of2005. Recent polls suggest that not only are the Tories (now in power 32 consecutive years and counting) headed for another landslide victory, but Klein’s personal approval ratings actually outpace support for his party. So at a time when sitting premiers are getting turfed left and right, Klein’s job seems safe for however long he wants it.

How to explain the Klein phenomenon? Part of it—a big part—comes down to personality. Klein is someone a lot of Albertans have trouble disliking, even when they disagree with his policies. The son of a professional wrestler, he grew up in a workingclass Calgary neighbourhood and is Canada’s best-known high-school dropout (though, to his credit, he went back to school, became a business-college principal, and is now studying for a communications degree from Edmonton-based Athabasca University). Despite more than two decades in public life (he also spent three terms as the wildly popular mayor of Calgary), Klein retains the common touch. He lives much of the year with his wife, Colleen, in a modest, three-bedroom bungalow in his home city, drives a 1977 Volkswagen Beetle and favours blue jeans and casual shirts when off duty.

True to his roots, Klein cares more about how he comes across in the blue-collar Sun newspapers than in the pages of, say, the Globe and Mail—which may help explain some of the curious crusades he takes on. This fall, for example, an addicts’ self-help club in Edmonton was seeking an exemption from that city’s stringent antismoking bylaw so its members could continue to puff away at the public facility where they regularly meet to help each other get off drugs and booze. Given his own high-profile battle with the bottle, one might have thought that Klein, a longtime smoker, would steer clear of the issue. Instead, he voiced strong support for the club’s cause, all of it lavishly reported in the Edmonton Sun.

PART of it comes down to personalitya lot of Albertans like Klein, even if they disagree with his policies

Perhaps Klein was taken with the name the recovering addicts gave themselves: the Keep It Simple Club. It could serve as his political motto. Klein is often surprisingly stiff when giving public speeches; his folksiness disappears when he relies on detail-ridden prepared texts. He also appears leery about one-on-one interviews where he can be challenged at length on policy, and grants very few of them. Where Klein really shines, though, is in the media scrum, which he does more frequently and at greater length than any other major politician in Canada. Here, the former television reporter is in his element, delivering the easy quip, the 30second clip, that will instantly be beamed to households across the province.

Klein’s penchant for boiling complex issues down to the basics sometimes lands him in trouble. But even then—such is his luck—it can end up working in his favour. A case in point: after the discovery of a single mad cow in Alberta devastated the province’s $5.1-billion-a-year beef industry, Klein said the rancher who owned the sick animal should have “shot, shovelled and shut up.” Industry officials quickly distanced themselves from the remark, fearing it could raise doubts about their commitment to public safety. So why would Klein say such a thing? “Because he’s in touch enough with the average rancher and feedlot operator to know what they are saying,” explains Faron Ellis, a political scientist at Lethbridge Community College, in the heart of Alberta’s feedlot country. “This plays right into his manof-the-people image.”

Klein has other obvious skills as a politician. He is neither an ideologue nor a revolutionary; he governs as a pragmatist from the centre, though admittedly, in Alberta, this axis is located farther to the right than in the rest of the country. He launches plenty of bold crusades—in favour of more private health care, against the Kyoto accord—but rarely follows through, especially if his finely tuned political antennae tell him he’s out of step with public opinion. And hard as it is for people outside Alberta to believe, his harshest detractors are hard-core conservatives who cite the government’s high levels of program spending and the premier’s political elasticity as proof Klein is, well, a closet Liberal.

Which brings us to another of Klein’s inherent advantages: he’s in charge of a very wealthy province. When he messes up, as he did by imposing electricity deregulation, he has the financial wherewithal to limit the political damage. So just prior to the last provincial election, he rolled out $4.1 billion worth of energy rebates to residential and industrial users. Now, as the next election approaches, he is pouring money into services he once slashed, including education and health care.

HE can appear surprisingly stiff during speeches, but his folksiness really comes through in scrums

Finally, Klein benefits from Alberta’s unique political culture. There is no tradition of opposition in the province. Governments are routinely elected by landslide majorities and left in power for abnormally long periods of time. As a born and bred Albertan, I’ve never understood this herd mentality, but there’s no denying it exists. Consider this: Alberta turns 100 years old in 2005 (another reason Klein wants to stick around). Over that century, there have been exactly four (count ’em) changes in government. In each case, an established party was replaced by a new upstart. No one, of course, expects that to happen to the Tories while Klein is still at the helm. Until then, it’s still Ralph’s world; the rest of us just live in it. 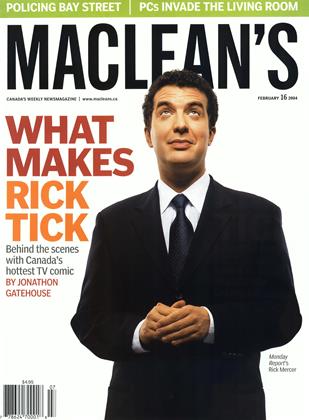