SO IT FALLS to Adrienne Clarkson to reveal at last what Paul Martin stands for. Or rather, whether there is anything he stands against.

On Feb. 2, the Governor General will read Martin’s first Speech from the Throne. Maybe a month later, a budget will follow. And perhaps a month after that, an election.

It has been great fun living in a fantasyland of endless goodies.

But recess is over. A lot of people are getting nervous.

Don Drummond is one of them. He used to be a Finance Department bureaucrat helping produce Paul Martin’s budgets.

John Manley spent a lot of money in his only budget as finance minister—and he budgeted for $ 1 billion a year in future savings without offering the faintest clue where those savings might come from. So the costsaving exercise Martin has already launched will go toward meeting savings targets that have already been booked. It will feel like running up a down escalator just to stay in place.

Drummond blames the tight squeeze not only on Manley but on his predecessorMartin. “Almost all budget observers,” Drummond says, “noted that increasing program spending at an average annual pace of almost seven per cent since 1998-99 left the fiscal situation highly vulnerable.” After that, all it took to get us into this fix was a SARS crisis, a mad cow crisis, a summer of forest fires and a soaring dollar.

So now what? Shift money from wasteful programs to nifty programs? Easier said than done. Drummond doubts the government can reduce old-age security, transfers to the provinces, or defence by so much as a dime. That’s half of the government’s program spending, off the table from the start.

Scrap the gun registry? Its annual cost is actually only $113 million. Meanwhile, the nation’s mayors and premiers and universities count their demands in the thousands of millions.

The mayors used to think they could count on Martin to deliver a “New Deal” worth more than two syllables. Now? “I’m of two minds about the guy,” Calgary Mayor Dave Bronconnier told me after his latest meeting with Martin. Either Martin is trying to keep expectations down so Bronconnier and other mayors will be happy and grateful when he delivers—“or he has so many priorities he can’t figure out how to deliver on any of them.”

To get money to the mayors, you have to go through the premiers. They want healthcare money. And Martin’s smile makes an imperfect substitute. “If he has a nice chat with us,” one provincial official said, “and then he gives the mayors a cheque, we’re not going to be satisfied with the nice chat.”

So you pay the premiers for health. The mayors for infrastructure. Who’s left out? In December, six groups in the college and universitiy sector wrote Martin asking for a separate, dedicated post-secondary education transfer to the provinces. “We haven’t heard back,” Robert Giroux, president of the Association of Universities and Colleges of Canada, told me.

Why an education transfer? Because, as health care rises as a fraction of provincial spending, colleges and universities fall.

Meanwhile, the cutoff grade for science applicants to the University of British Columbia is 89 per cent. UBC president Martha Piper would like to see 30,000 more university spaces in British Columbia alone. Increasing student aid is easier—Ottawa doesn’t have to negotiate with the provinces to do that—but it does no good to help students afford university spots that don’t exist.

The research sector is one of Canada’s most spectacular success stories of the past decade. Martin can accelerate that momentum or stop it cold. The Canadian Institutes of Health Research is turning down almost 1,000 research applications a year that are rated “very good” or “excellent.” The success rate for applicants to its New Investigators Awards Program is only 20 per cent. CIHR president Alan Bernstein would like another $379 million, right away.

Oh look, here comes the bottom of the page and we haven’t even added up the demands for defence, African aid, debt reduction or the Kyoto accord. Governing is about choosing. It is time at last for Martin to choose. Hfl 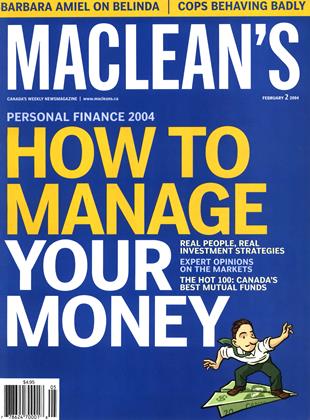