IT’S A HOLLYWOOD showdown between zombies and zealots. Or at least that’s how it sounded as Sarah Polley talked about the possibility that, on its opening weekend, Dawn of the Dead might be the movie to finally knock The Passion of the Christ from its No. 1 position at the box office. Both are graphically violent movies about resurrection and nasty violations of the flesh, but they’re rather different in tone, to say the least. Polley was on the phone from Los Angeles, where she’d just been through a media whirlwind to promote her starring role as a zombie slayer in Dawn of the Dead. “It’s really violent, really shocking,” she says. “It’s the sickest, most twisted movie I’ve ever seen.” But then she hasn’t seen The Passion of the Christ, and doesn’t intend to. “I don’t want to be a part of that—all these zealots coming out of the woodwork. The best comment I heard about our movie versus The Passion is: ‘They’ve got only one guy who comes back from the dead. We’ve got millions.’ ”

Dawn of the Dead is Polley’s first lead role in a big studio film since she starred in The Adventures of Baron Munchausen (1988) at the age of nine. The 25-year-old Canadian actress, known for her outspoken left-wing views, had qualms about doing a Hollywood action movie. “It could have been a piece of crap,” she says. “But I’ve had a fixation with zombies since I was a little kid. I did the movie with the ridiculous hope that it would be as insane as it is. And it’s over-the-top and cheesy and completely fantastic. I can’t believe it’s getting released the way it is.”

Universal Pictures’ remake of George Romero’s 1978 plague pic was filmed in Toronto at the height of the SARS crisis—and opened in 2,745 theatres across North America on the weekend. Coincidentally, Polley is starring in another Toronto-made movie about mass hysteria, which is coming out this week. Luck is a tale of sports gambling set against the legendary 1972 hockey series between Canada and the Soviet Union. But this modest $2-million Canadian gem is being released on a radically different scale: this Friday it opens in Toronto, Vancouver and Montreal on a total of just four screens.

It would be hard to find a more painful example of the gulf between Hollywood domination and Canadian aspiration in the film industry. And as Polley straddles these farflung worlds, the irony of the situation is not lost on her. “In Canada,” she says, “if people were really given a choice between going to see a movie about hockey and a movie about zombies, they’d probably go see the movie about hockey. But with Dawn of the Dead playing on thousands of screens and Luck playing on one or two, there is no choice. We keep complaining about how Canadian films aren’t accessible and don’t put bums in seats, but those bums can’t even find their way to the seats.”

The more Polley talks, the more wound up she becomes. “This shows how obvious it is that we need to protect Canadian film,” she says. “Everybody has theories—that we need to bring back the tax shelter, or make stupider films. But the only thing that makes a difference is access. Stupider films are just easier to go to. It’s amazing that we’re allowing ourselves to be this colonized. When the music industry fought for Canadian content quotas, people thought they were crazy, but now we accept it. People in our film industry aren’t even willing to fight for it.”

SO IN THIS case, what would they be fighting for? Is Luck another one of those grim, pathological dramas that Canadians are famous for? No. It’s a wry, engaging, amiable movie about a nice guy who digs himself into a pit of... well, okay, it is a story of addiction, about a loser betting against the faint hope that his country might be capable of heroics. But it’s witty, well-acted and rousing: you root for him every step of the way, although he has less chance of redemption than the Canadian hockey team has of beating the Soviets. And last week Luck got lucky—the movie, which was rejected by the Toronto International Film Festival, won the top prize for best narrative feature at the South by Southwest festival in Austin, Texas. Opening on the heels of The Snow Walker and Love, Sex and Eating the Bones—two Canuck crowd-pleasers in search of a crowd—Luck suggests Canadian cinema is on a roll, even if it’s playing for pennies.

Luck’s Toronto-based writer-director, Peter Wellington, also cast Polley in his award-winning first feature, Joe’s So Mean to Josephine (1996). His passive-aggressive protagonist is Shane (Luke Kirby), a frustrated writer with no faith in his own fortune who has a job scripting catalogue descriptions of office furniture. Shane is secretly in love with Margaret (Polley). But as she agonizes over whether to follow a dubious ex-boyfriend to England, he can’t bring himself to show his hand. Instead, he talks her into the trip and agrees to take care of her cat.

Shane hangs out with a gang of petty gamblers led by Andrew (Jed Rees), a casino worker who urges him to take risks. Taking the advice all too literally, Shane soon racks up a fat debt to a ruthless loan shark. Andrew comes up with a scheme to pay it back: exploiting hometown boosterism in the Canada-Russia series, the buddies become bookies. We know how it will end—with the goal by Paul Henderson—but Wellington keeps the plot’s suspense in play right up to the wire.

There’s an irresistible momentum to watching a character on a streak, either winning or losing. We’ve seen this before—most recently in OwningMahowny and The Cooler. But Wellington gambles against formula. There’s no fairy-tale justice or moral recovery at stake. Shane starts out narrating his tale of woe to a self-help group, then calls their bluff: “I’m not sure Gamblers Anonymous is for gamblers,” he says. “It’s for losers. It’s not as if you were winning all the time and it just got out of hand.”

Luck is a four-way buddy movie with well-drawn, warmly fallible characters. Kirby, who makes a likeable loser, is supported by Noam Jenkins, Sergio Di Zio, and Rees (the incorrigible keyboard player on TV’s The Chris Isaak Show), who almost steals the movie. And the constant backdrop of archival footage showing the Canada-Russia series is a nostalgic treat, even if the script falls prey to the odd anachronism (no one said “dumbing down” in 1972). My main complaint is that Polley— off-screen for most of the film—is reduced to a mere framing device.

In Dawn of the Dead, she’s the heroine. Polley plays Ana, a Milwaukee nurse who, after noticing some odd cases of infection at her hospital, comes home to see her daughter, then her husband, turn into voracious, flesh-eating zombies. For no apparent reason, the world has been overrun by a plague of cannibalistic corpses driven by an insatiable hunger. And their victims just keep swelling the ranks of the living dead. After a nightmarish escape from her home, Ana takes refuge in a suburban mall with a ragged band of survivors—a no-nonsense cop (Ving Rhames), a mild-mannered TV salesman (Jake Weber), a reformed street tough (Mekhi Phifer), and his very pregnant Russian wife (Inna Korobkina). In this suburban fortress, as the zombie hordes surround them in the parking lot, they fight a turf war with a trio of security guards led by a mean redneck (Michael Kelly).

4 I’VE HAD a fixation with zombies since I was a kid,’ says Polley, calling the film ‘over-the-top and cheesy and fantastic’

Aside from some jarring scenes of pixilated digital footage in the final reel, this first feature is directed with slick, exhilarating style by TV commercial ace Zack Snyder. It’s better acted, and scarier, than Romero’s original. But it carries the same satirical subtext. Zombies serve as the perfect metaphor for craven consumers, and a suburban mall is not unlike a temple of the living dead—the characters spend a lot of time at a coffee kiosk called Heavenly Grounds that closely resembles Starbucks. The film is riddled with subversive wit. In one outrageous scene, the survivors play a sniper game on the roof, picking off zombies that look like celebrities, including Burt Reynolds and Jay Leno. During Polley’s gauntlet of TV interviews in Los Angeles, an Access Hollywood host asked her, “If you could shoot a celebrity who would it be?” Polley was stunned. “I said George Bush would be No. 1. There was this huge silence. Then this pained hissing sound as she looked at me with these shark eyes. But what kind of question was that?”

Polley says she fought with the filmmakers to keep her character strong—“she’s not the typical girl running around in her underwear screaming.” No, she’s smart, resilient and, as one character puts it, “she’s got a mouth on her.” It’s shocking to see Canada’s girl from Avonlea hold her own in a brutal horror movie. Despite the wit, it’s not a tongue-in-cheek parody like Scream. The violence is hard core, with zombie heads exploding like paintballs, and some chainsaw massacre thrown in for good measure. Passion devotees may accuse me of a double standard, but this was fun, not torture. One of the good things about having seen The Passion of the Christ is I now feel immunized against movie violence. After Mel Gibson’s orgy of sacramental gore, anything else is a walk in the park. fll 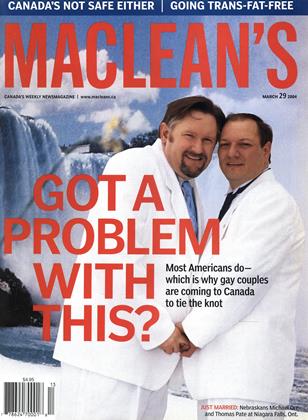