‘Why don’t we just assume that all politicians are liars, crooks and swindlers? That way when we meet one who isn’t it will come as a pleasant surprise.’ -jamesArmstrong,victoria

Working in the private sector, I’ve always believed that if an error has taken place, it is better to acknowledge it and deal with it in the best way possible (“Scandalous,” Cover, Feb. 23). It appears that this approach is not welcomed in Ottawa. Witness how Paul Martin is being castigated for his handling of the sponsorship fiasco. After the auditor general’s condemning report, Martin chose to accept the criticism, acknowledge it had validity and undertake the necessary measures to correct and prevent reoccurrence. This is in stark contrast to the usual Liberal approach of stonewall, deny, ignore and repeat. As his reward, Martin is being soundly lambasted in opinion polls, in the media, and from within his own party. For my part, I applaud the Prime Minister, and he has earned a great deal more of my trust and respect.

Well Mr. Martin, you have left me straddling the fence with your “I didn’t know a thing about it” response. Either you are one of the biggest liars in Canadian history or else the stupidest finance minister politics has ever seen. Whatever the case, you’re not getting my vote.

To any individual, $250 million is a lot of money. But the amount spent on these controversial sponsorships is about oneseventh of one per cent of the federal government’s 2002/2003 expenditures. Put another way, to someone earning $50,000 a year, that’s the equivalent of $71.43. Would we expect such a wage earner to know the details of every $71 expenditure, especially those made by other family members? Too many Canadians have unfair views of what knowledge Martin should have had while he was finance minister. Equally unfair is how we seem to suspend a tenet of Canadian law for politicians: innocent until proven guilty. Wayne Reed, North Grenville, Ont.

With all the temptation and pressure that exists in the corridors of our legislatures and the marketplace, it is uncommon to find people who do not buckle under the pressure. During the mid-nineties, I interviewed numerous politicians, including party leaders and Paul Martin, while hosting a cable TV show. I am not sure that any leader we have in Canada, including Martin, has the strength of character to tackle the selfserving culture that exists within our political systems.

I am amazed at the lack of outrage. Why aren’t Canadians burning effigies of Jean Chrétien and his merry men? Place the blame where it belongs.

I don’t mind spam. It’s the price we pay in order to have access to the incredible resources available on the Internet (“You’ve got spam,” Special Report, Feb. 23). I weed through literally hundreds of spam messages each day. It takes about five minutes to blow out what I don’t want. I consider them to be the same as those flyers that come with the newspaper-very occasionally I find something that I’m actually interested in. Somebody has to pay the bills, and if this is the price we pay, it’s a small one. Consider the alternative. Shawn Rosvold, New York City

People complain far too much. I get as much spam as most people, but I deal with it. It is so simple to recognize spam and delete unwanted messages that people have no excuse for being so impatient.

I’ve just read your negative view on spam e-mails. I’m 14 and I completely agree. Every time I log on, I always get a big fat block of spam waiting for me.

All these diet experts should shelve the rhetoric over who’s right and who’s wrong and point out that it takes work to lose weight, and that merely losing weight by dieting shouldn’t be the Holy Grail for everyone. What good is losing 20 pounds if you still can’t climb stairs without wheezing and gasping?

If you want to lose weight, eat less. It takes willpower, motivation and, fundamentally, a lifestyle change. Anything else you hear about diets is just yammering from marketing and vested interests.

The worst thing about the Atkins diet is hearing the misconceptions surrounding it (“The lowdown on the low-carb diet wars,” Essay, Feb. 23). It’s not about stuffing yourself full of bacon and watching the pounds fall off. It’s about eating a steak and green salad for dinner, without the scalloped potatoes. I have watched my father lose 30-plus pounds in three months while on the Atkins diet. He now has lower cholesterol and weight levels than he had in the 15 years spent on low-fat diets. People are so afraid to discount anything supposed dieticians tell us, or to consider that Canada’s Food Guide to Healthy Eating may not be the right diet for everybody. Remember the uproar when it was suggested that the world may be round?

readers tell us they feel for the less fortunate

Letter writers tend to be angry. But others are touched by what they read. Take two recent stories by frequent contributor and child advocate Dr. Samantha Nutt on the horrors of living in the Congo. “I wish child soldiers could have had the opportunity to grow up as I did,” wrote Erin Neufeld of Carman, Man. “That they believed in peace and not war.”

In response to a letter from Ian McGregor of Orleans, Ont. (“Waking the giant,” Feb. 23): yes, we Canadians do have it pretty good. As McGregor notes, we don’t have terrorists flying planes into buildings on Bay Street. But perhaps that is because we don’t stick our nose where it doesn’t belong. I did not feel safe in my bed the night of Sept. 11, nor did I feel safe when George W. Bush declared that every nation is either with the U.S. or against it. Unchecked power is trouble. Lanna-Rae Krishka, Saskatoon

In response to the letters criticizing your Feb. 9 cover “Hope you lose, eh,” George W. Bush defenders are right that the President has guts and does what he thinks is right, regardless. One problem, though. Guts and resolve, plus incompetence, equals one dangerous president.

I don’t get it. Many letters suggest that without the U.S. protecting us we would be helpless. Urn, protecting us from what? Last time I checked the only threat Canada ever really faced was in the Second World War— and that was only if Hitler had won and considered crossing the Atlantic. One American writer, Jon Hebert, sings the praises of the U.S., and then says the world stood up and did nothing after the terrorist attacks. Well, where did all those planes land on Sept. 11? Dieter Hundrieser of Ganonoque, Ont., wrote, “Don’t you think Americans would have expressed a similar opinion about our former prime minister, Jean Chrétien?” I would be surprised if one could find 15 per cent of Americans who had heard of him. And anti-American? What does that mean? Are we anti-Canadian because we criticize our government? Just because we are neighbours does not mean we have to show love for their leadership. I have neighbours, but I don’t love them.

I find it troubling that a fourth-year Royal Military College cadet, commenting at the West Point-RMC hockey game, is quoted as saying, “There is a difference between West Point cadets and us... Our roles are different. We’re the peacekeepers.” Obviously, this young cadet has been the victim of the government brainwashing that Canada is a peacekeeping nation (“Replaying a border war,” Sports, Feb. 23). Will someone remind this cadet and his peers that it is combat-capable forces that do peacekeeping. He should also recognize the mission he may find himself involved in will be peace enforcement—often much more dangerous than war. In the meantime, the politics course or whatever at RMC should be examined with a view to giving our young cadets an introduction to real-world politics and military affairs.

Down with the king

I am curious as to whether Brian Bergman actually talked to any Albertans before writing “King Ralph’s long reign” (Alberta, Feb. 16). As a disgruntled Albertan, my own experience has been that one doesn’t have to poll many Albertans to find a significant number who are fed up with Klein’s arrogance, cleverly disguised by his common-man image. And as for his pouring money into education and health care programs previously slashed, a more accurate picture would be trickling enough cash in to keep the patient resuscitated but still critically ill. Debbie Boulton, Calgary

It was shocking to read that the two boys in “Arms and the child” (War, Feb. 9) would go back into the army if they had the chance, even with all the horrible scenes they saw and still see as nightmares flash through their minds. In Canada, we try to protect children from violent video games and movies with a ratings system. In Congo, young children are carrying out things we believe are too violent to even be seen by them—they were the characters in our graphic video games, only it was no game and they are still dealing with the trauma. If Congo is to experience peace, something needs to be done to help the kids deal with the emotional scarring of being a Mayi Mayi militant soldier. Cindie Dunn, Carman, Man.

Your article about Rick Mercer is exactly what I was looking for (“Rick’s shtick,” Cover, Feb. 16). Up until two months ago, I questioned whether anyone watched TV programs on CBC other than the news. One evening, I flipped through channels and discovered Mercer’s Monday Report. The result? I now faithfully tape one-and-a-half hours of CBC every Monday, including This Hour Has 22 Minutes and Royal Canadian Air Farce.

I sure do like them entertainers from any of the Maritime rocks. I most enjoyed the way you portrayed Rick as what he is—a very gifted entertainer.

Beauty of the beasts

What a wonderful act of kindness these people have performed in donating land for the réintroduction of bison to southwestern Saskatchewan (“Buffalo reborn,” Nature, Feb. 16). Amid all the ugly stories of war and politics, this beautiful piece appears. I am so proud of these people and hope their act of kindness inspires more than myself to follow with other unselfish gifts to those “others” we share our Earth with. Good on you! Sheila Turner, Sylvan Lake, Alta. 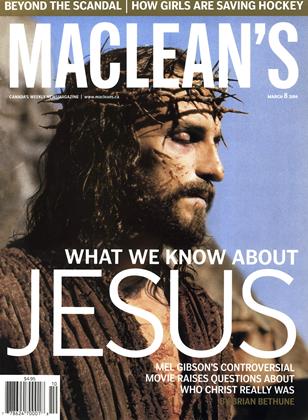