HEALTH CARE is supposed to be just about everybody’s most pressing concern. Paul Martin calls it, along with education, his top priority. Health devours by far the biggest portion of provincial budgets—around 40 per cent—so premiers obsess over it. Polls show that it’s the Canadian public’s foremost worry.

Given all that, you’d think it would be the dominant national political issue. But while last week’s federal budget did contain a bundle of health measures—including a longpromised, one-time-only $2-billion top-up health payment to the provinces, and a new public agency to deal with the next SARS— it was all but silent on the funding crunch that’s threatening medicare. And though federal Health Minister Pierre Pettigrew mused after the budget was tabled about Ottawa’s desire to negotiate an ambitious 10year fix for the system, he offered absolutely no details. “The signals are mixed—the budget negative, Pettigrew’s comments positive,” said Manitoba Premier Gary Doer. “They’ve demonstrated, in fact, that they don’t have a plan.”

Canadians might well be forgiven for imagining the plan was already in place. Roy Romanow delivered what was touted as a landmark royal commission report on health care in December 2002, and optimists thought it would provide the key policy prescriptions. Along with more complicated reform ideas, Romanow urged Ottawa to boost federal funding to 25 per cent of provincial health spending, up from about 16 per cent now. That hasn’t happened, and Finance Minister Ralph Goodale made no commitment to hit the one-quarter target in his first budget—to the dismay of the provinces. Instead, federal Liberals point ahead to Martin’s planned meeting with the premiers in August as the time to strike a new long-term funding deal.

But that first ministers’ conference might be well after the spring election that many insiders are still predicting. Would health care even figure prominently in a campaign? Potentially not. The Liberals might decide to avoid showing their hand in a platform just before they expect to sit down to hard bargaining with the provinces. And their main adversaries, the Conservatives under newly elected leader Stephen Harper, seem reluctant to risk saying much, conscious of how badly the old Canadian Alliance was beaten up over that issue during the 2000 campaign for allegedly favouring two-tier health care.

But if the basic issue is generating frustratingly little action these days at the federal level, the provincial is quite another matter. Maclean’s has learned that Ontario Premier Dalton McGuinty’s government is closely studying a detailed proposal from two University of Toronto health economists, titled “Blueprint for Comprehensive Primary Health Care Reform in Ontario.” The report urges the government to push ahead with dramatic reforms that would eventually lead to most doctors working in so-called primary care groups, along with nurses and such other care providers as physiotherapists and pharmacists. Instead of doctors charging the provincial health insurance plan on a fee-for-service basis, the new groups would get an average annual fee of $566 per patient from the province to provide the full range of services. It’s an unusually detailed proposal along lines that have been widely discussed but tested in only a few innovative clinics.

Peter Coyte, the University of Toronto health economics professor who is the lead author of the report, argues that Ontario and other provinces have little choice but to move quickly with the type of reforms he’s proposing. “There seems to be almost universal consensus among health policy experts that this is the model needed to move forward,” he says. Among its main advantages: putting various health providers under one roof would mean doctors would only see patients who really need their costly attention. And moving away from the traditional fee-for-service payment method would eliminate an incentive for doctors to maximize the number of patients they treat, making the yearly costs more predictable for provinces. “The major resistance to change,” Coyte says, “comes from physicians who want to enhance their income base.” Patients, on the other hand, would flock to the new groups, he predicts, lured by aroundthe-clock service from a range of health professionals, including at least three to five doctors per group.

TAKING AIM AT OTHER HEALTH ISSUES

While provincial premiers slammed the federal government for dodging the pressing issue of long-term health funding in last week’s budget, the Liberals did take aim at a range of other issues. Finance Minister Ralph Goodale’s financial blueprint highlighted a number of new and previously announced initiatives, even as Ottawa put off the big money questions to a planned summer meeting of Prime Minister Paul Martin and the premiers.

■ Prompted by the SARS outbreak, Ottawa earmarked $404 million already in Health Canada’s budget for a new Canada Public Health Agency. It will be responsible for preparing for emergencies, and managing infectious diseases and some chronic diseases. A new chief public health officer will help set up the agency and how it will work with the provinces, which actually deliver health services-including in emergencies.

■ Another $165 million over two years will be spent to improve Canada’s readiness to cope with emergencies. Emergency response teams will be established and stockpiles of supplies, including portable hospitals, set up. The provinces will be given $100 million to invest in information systems to keep track of public health developments, especially monitoring infectious diseases. The idea is to develop a system that would quickly pinpoint the outbreak of the next SAR5. Mar said the pressure for change will ultimately come from aging Canadian baby boomers. “It will seem strange to them that they can spend money on themselves for everything else, but they can’t for things they may feel are important that relate to health care,” he predicted in an interview. But to allow private payment for some services, Alberta faces the prospect of Ottawa hitting back—by cutting federal transfers for the violation of the letter or spirit of the Canada Health Act.

■ The provinces will get $300 million over three years for immunization, particularly vaccines for children and adolescents. Manitoba Premier Gary Doer said that the funding is welcome. But he pointed out it will not be enough to make expanded immunization programs available to everybody-leaving provinces to decide whether to top up the programs from their own strapped budgets or make the shots available free of charge only to low-income earners.

■ The provinces get a $2-billion one-time bonus to supplement their Canada Health and Social Transfer payments. This was promised in last year’s budget, assuming the federal surplus for 2003-04 allowed it, and confirmed by Paul Martin in his January meeting with the premiers. But the provinces had hoped the boost would be added permanently to their annual cash transfer payment. That base amount stands at $15.8 billion for fiscal 2004-05, and is slated to rise to $19.3 billion in 2007-08— an annual growth rate of 10.2 per cent, more than double Ottawa’s forecast for the pace of economic growth. Apparently, though, not enough.

While Ontario’s Liberals examine the potential for reform within the bounds of universality, Alberta’s Conservatives are again making noises about a far more controversial bid to break some of the taboos of Canadian health care. Last week, Alberta Finance Minister Pat Nelson tabled a budget that boosted health spending by 8.4 per cent, bringing the government’s total annual outlay to $8 billion—double what it was a decade ago. “It just has to stop,” Nelson said. “This system will crater.” But Gary Mar, the province’s health minister, left little doubt that Alberta is determined to get control of costs by at least experimenting with letting more services be paid for by private insurance plans, or out-of-pocket. “Canadians should have the opportunity to look at all the different options,” he said. “Generally what they’ll see in many countries that have social-democratic traditions, places like Sweden and Australia, is they have a blend of things that the basic health-care system pays for and other things that can be obtained through some form of private insurance.”

Stephen Harper is Alberta’s closest ally on the federal scene. Yet the new Conservative boss, who handily won his party’s March 20 leadership vote over rivals Belinda Stronach and Tony Clement, cagey about explicitly endorsing the sort of scheme Mar proposes—a combination of basic services covered by public insurance and enhanced or special services funded privately. Harper stresses that he favours letting the provinces experiment freely, given that they have constitutional jurisdiction over health. But pressed on whether a Conservative government in Ottawa would allow provinces to let more services be covered outside government insurance, he doesn’t deny it. “I would bring it down to a single principle: will anybody be denied medically necessary services because of inability to pay?” he said in a recent interview. “No province is proposing to have a parallel private system for core insured services. They are not asking for it. As a federal prime minister, I wouldn’t be proposing it.”

With the federal Liberals vague on their policy ideas, and Conservatives guarded about theirs, it seems health might not get tackled squarely in the widely expected May or June election. Not surprisingly, with the sponsorship scandal roiling on week after week, Harper wants to make Liberal ethical lapses and mismanagement of taxpayers’ money the ballot question. More unexpectedly, the Martin Liberals appear almost as willing to let those issues dominate—ready to defend the steps they’ve taken to clean up problems they hope voters will blame on the old Jean Chrétien regime. It may be left to Jack Layton’s NDP to try to push health to the forefront. Manitoba’s Doer, an NDPer himself, predicts voters will insist on it. “The political parties and the press decide what issues are debated and covered,” he said. “But the people decide what issues they will vote on.” Martin and Harper might not be ready to spell out specifics on health. The question is whether an election can push them to a level of clarity that matches the urgency of the problem.

To view our photo gallery of the Conservative leadership convention, visit www.macleans.ca/gallery 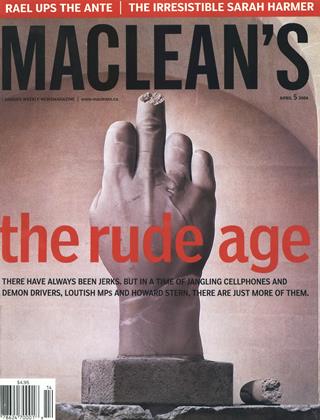