In this area of Newfoundland, moose may now outnumber people,

ON A SLATE-COLOURED morning, the ladies down at Noseworthy’s Grocery in Green Island Brook are ticking off the list of heartbreak and resignation. “Denny went yesterday. Don Macey, Junior Macey, Ramsey and Ricky went last Thursday. Wilfred Hughes left on Monday. And there’s three more truckloads heading for Alberta after the weekend.” Nobody’s keeping a strict count anymore, but best estimates are 70 or 80 of the village’s 200 remaining residents will be gone by the end of June, to look for work once the last of

the lobster pots are pulled from the water. Some will come back in late fall, but each year more and more families decide they can’t abide the months of separation. There’s no one to buy your house, so you just lock it up, maybe put some boards on the windows as extra protection against the storms that whip across the Strait of Belle Isle. And join the thousands of other Newfoundland expats scattered across the country, with keys and memories stashed away in safe places.

A little distance along the gravel road, Wallace Hughes is sitting at his kitchen table

wondering if that’s how his story will end too. “One winter is all it takes. Why come back home when you can go out there and work and have money?” He’s spent the morning tying up loose ends, chopping wood, setting up a swing set in the front yard for his daughter. In a couple of days, he’s joining the exodus, bound for Edmonton and a job labouring with a landscape crew. The ruddyfaced 47-year-old has never been away from home before, but there isn’t much choice. Last summer, after years of struggle, he was forced to sell the takeout stand and arcade

he had run for more than two decades. It’s the same situation as his neighbour, who used to operate the town’s only gas station. You just have to look across the harbour to the empty wharf and shuttered cod plant to see why. “Everyone fished. No one ever went away,” Hughes says as he stares out the window. “It was that little bit of extra money in the summer that kept you going.”

In the dozens of tiny communities that skirt the shore of the Northern Peninsula—as if the original settlers, having survived the perilous crossing of the Atlantic, were content to cling to the New World’s edges—it’s a familiar tale. Nearly 20 per cent of the population has left over the last decade. The 20,000 who remain, now conceivably outnumbered by the moose that overrun the vast inland bush and stand sentinel every couple of kilometres along the roadways. Over

the past five years, Newfoundland’s economy-fuelled by the Hibernia oil project off the Avalon Peninsula—has grown faster than that of any other province. But the boom towns are 12 hours away by car from the island’s northern tip, where unemployment hovers around 24 per cent.

In Big Brook, the end has already come, with the last three families opting this past February for government relocation to be closer to schools, medical help and shopping. In other villages such as Grandois on the peninsula’s eastern coast (pronounced “grand-eyes”—as with many spots on the former French Shore, not even vaguely like the language you learned in school), the ghost-town future is in sight.

It was home to approximately 100 when, right after Canada Day, 1992, Fisheries Minister John Crosbie announced the closurefirst “temporary,” now quasi-permanent—of the cod fishery. Now, most of the homes have been abandoned, boats and nets left to rot on the landings. Cannibalized cars (“machines” in local parlance) sit rusting in the parking spaces next to the dormant processing plant. There are only four school-age children among the 14 remaining families. All 11 of Leo and

Ida McGrath’s kids have moved. “There used to be a time when you had to go just outside the harbour and drop your nets and they would be filled. The hills here were covered with drying fish,” says the 67-year-old Leo, bom and raised in Grandois, long before light and power, or even the road, arrived. “Now, it’s not legal to go and get yourself one for the table.” It’s not like governments, first the federal

THERE’S no one to buy your house, so you just lock it up and join the other expats scattered across the country

Conservatives, then the Liberals, didn’t try to help. There have been a dizzying array of acronyms since some 40,000 people in the four Atlantic provinces and Quebec—30,000 of them in Newfoundland and Labradorsaw their livelihood drastically diminish or altogether disappear. Billions have been

spent on emergency assistance and “transition” programs such as NCARP, AGAP, CFAR, and the granddaddy of them all, TAGS. But the people of the Northern Peninsula have little to show for it, despite steady representation at the cabinet table—Crosbie, then Brian Tobin, now Gerry Byrne, parliamentary secretary to the minister of health.

“It was the make-work syndrome,” says Greg Mercer, a former provincial assistant deputy minister for intergovernmental affairs and once Tobin’s chief fixer for the riding. “They were moving rocks from one side of the road to the other. It was something done to keep communities alive, but it’s nothing that anybody would stand up and say they were proud of.” People retrained for jobs that mostly didn’t exist—at least not where they lived. Others just grimly concentrated on getting enough work to qualify for Employment Insurance. Hard choices delayed by hopes that the fishery would someday bounce back. “It’s a real eyeopener, not just for rural Newfoundland but rural Canada,” says Mercer. “The level of continuing support these people need versus the handouts we were giving them.”

Along the wharves in Port au Choix, where

the rich cod stocks and massive processing plant once provided residents with some of the highest per capita incomes in the country, there is more anger than gratitude. “The mainlanders talk about the money they sends down here,” Dwight Spence says as he sprawls in the captain’s chair of his 55-foot boat, the Cape Ashley. “But my God, look what we’ve been giving—trees, water, minerals, fish, oil—everything we got. Now, we’re educating our young people and giving them one-way tickets out. Who benefits?”

A fisherman for 38 years, Spence made a solid living, employed several crew and never filed for El during his first quartercentury in business. Now, as he watches the dock workers off-load the 40,000 pounds of shrimp in his hold, he’s unsure if he will be able to make it to the end of the season to apply for his cheques. Three days of back-breaking work, 100 km out and back with a full catch, and he probably won’t break even.

Too many communities now fight for a share of the ever-shrinking pie. Quotas for crab, turbot, shrimp and halibut are spread thinly over Atlantic Canada, and the seasons are shorter than ever. The world market is flooded, prices are a fraction of what they used to be, fuel and insurance costs have skyrocketed. Who’s to blame? Spence isn’t the type to sheath his sharp tongue. Politicians set the quotas, make the tradeoffs, pay people to sit at home, keep hope alive where it should have died. “We’ve been mismanaged,” he says. “Sold out. We’ve been traded for every other commodity in the world. And we’re left here poor as piss.”

Twelve per cent of Port au Choix’s population has left since 1996. The local fish plant, which once operated almost yearround and employed 450, is now open for a few weeks each summer and has work for only 150. And like the whole peninsula, the town is greying at an alarming rate. The remaining workers are in their 40s or 50s, and their children leave when they graduate (the nearest high school is now nine kilometres away). Vachon Noel, 28, Port au Choix’s mayor, is an exception. He can count on one hand the members of his high-school graduating class who remain. Friends— two retrained as millwrights, the other as a carpenter—will soon leave because they can’t find work. “You just can’t make a sensible in-

come,” he says. “There are so many opportunities abroad, why would you stay home?” There are bright spots on the peninsula. St. Anthony is constructing a new $ 10-million cold storage facility that should see business at its locally owned fish plant expand— a major turnaround less than two years after Mayor Ern Simms staged a mock funeral for the town to protest the loss of a crab licence. Rocky Harbour, in the heart of Gros Morne National Park, already attracts 150,000

visitors a year, and is building for more. The Dark Tickle Company in St. LunaireGriquet, which makes gourmet jams and other products, is exporting around the world. But the economy still rises and falls with the tide of the fishery. And despite the out-migration of close to 15,000 people over the last decade, the government buzzword “sustainability” seems a long way off.

Judy Tucker and Edna Hedderson used to earn a decent living boning and filleting cod. When the fishery shut down, they lost their jobs, as did their husbands. Both women

received assistance money and retraining. Judy ended up clearing walking trails on a program that lasted just long enough to give her the 14 qualifying weeks for El. Edna found a part-time spot as a home-care assistant, earning barely enough to cover the cost of gas. In 2000, they landed positions as Vikings at Norstead, a recreation of a Norse village the local tourist authority opened across the road from the L’Anse aux Meadows national historic site. Judy now spends her summers in a smoky longhouse, chatting with tourists and cooking over an openpit fire. Edna makes pottery in an outdoor kiln. Their new jobs don’t pay as much as the fish plant in St. Anthony did, but it’s a living—and a second income that their families sorely need to survive. “You can get by on a little here,” says Edna. “We own our own homes. We get a lot of food from the sea. And moose and wild game from the bush. We make our own bread.” Judy giggles. “We live like the Norsemen—off the land.” There aren’t many left in their communities—just 30 people in L’Anse aux Meadows where Judy lives, and only 18, mostly elderly households, in Edna’s home of Hay Cove, the next village over. The spot where the first European settlers arrived 1,000 years ago is slowly emptying out. The tourists come in increasing numbers each summer to learn about Canada’s ancient past. Someday soon they might need a recreated village to show how Newfoundlanders used to live, too. lifl 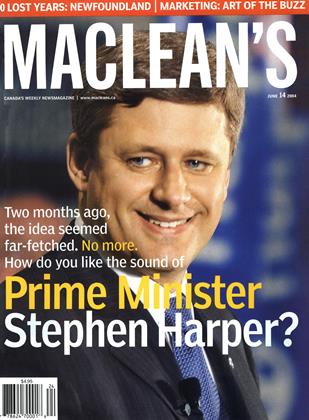