AFTER THE ARMY LEFT

AFTER THE ARMY LEFT

As cottage prices go through the roof, many urbanites feel shut out, writes CHARLIE GILLIS. So, in a twist on time-shares, builders are offering just

UNTIL RECENTLY, Rose Keith’s dream of owning a cottage in the Gulf Islands looked like a long shot—a privilege reserved for those blessed with inheritance or excellent stock tips. In the last few years, B.C.’s southern archipelago has become as much a playground for rich humans as for orcas and sea lions, with oceanfront lots commanding more than $700,000 and buyers flocking from the U.S. and Europe to retire in paradise. Keith and her husband Bart Bender, by contrast, were working demanding jobs

in Vancouver to support 11-month-old twin girls. “It wasn’t,” the 37-year-old lawyer admits, “the best time for us to go looking.” But when a friend alerted her earlier this year to a unique-sounding opportunity on Pender Island, Keith’s pulse quickened. Rather than competing for existing properties, she and Bender could buy a quarter share of a cottage overlooking Otter Bay, a nook on the island’s west shore, where small ferries putter back and forth and herons stand like sentries on the tide lines. For about $140,000, plus annual maintenance fees, they’d get 12 weeks a year—including two weeks in the summer—in a tastefully decorated cottage while a management company looked after cleaning the eaves and waxing the floors. Unlike common time-shares, which confer right of use but no title to the land, their so-called “fractional ownership” would give them a portion of the entire 31unit development. Keith remained nervous about acquiring a second residence, but as she perused the brochures, she couldn’t help thinking of her previous visits to the Gulf Islands. Soaring eagles. Breaching whales. Warm afternoons on the water.

FOR MANY Canadians, a journey through cottage country evokes complex feelings, starting, often as not, with winsome memories of summer camps or lakes where we first learned to

swim. But that nostalgia can quickly morph into desire—our peculiarly northern instinct for a foothold in the wilderness—followed by resignation and envy as we realize the best lots have been bought up, and those coming on the market sport the price tags of middle-class urban houses. A recent report by Royal LePage Real Estate Services found that values of waterfront cottages climbed 10.3 per cent nationwide over the past year, to an average of $199,922. Properties in Ontario’s vacation heartland ballooned to $349,483—17.4 per cent more than in 2003making them practically unreachable for those already paying a Toronto mortgage. In B.C., the news is even worse: according to a separate survey by Re/Max Canada, waterfront lots in the Gulf Islands are fast approaching the $ 1-million mark, while those in the vacation meccas of the Okanagan Valley and the Shuswap Lake area are routinely netting $500,000 or more.

How, then, does the average person get in? For some, access to the lake may mean booking into a waterfront resort or buying a lakeside condo—hardly the epitome of a placid retreat. But for Keith and a growing number of people, the answer lies in fractional ownership, a variation on timesharing in which the usage period purchased comes with at least some equity that can be resold. It’s a concept pioneered by aircraft vendors and adapted to

condos and ski chalets in the late 1990s by hotels and resort developers like Intrawest Corp. In Whistler, B.C., for example, 50 quarter shares changed hands in 2003, while several hundred owners are using theirs each year.

Now, the fractional model has the potential to change the face of the country’s most popular cottage areas. Since 1999, developments have been springing up across Ontario’s lake country and throughout B.C., offering shares of waterfront cabins and golf-course condos at prices ranging from mid-$30,000 for a one-tenth portion to as much as $150,000 fora quarter share. Greg Halseth, a geography professor at the University of Northern B.C. in Prince George, sees such projects as part of a larger shift in vacation land, from individual families using individual cottages to the sharing of properties. This co-ownership can happen as a result of inheritance, or high prices, or both. “Even though a cottage may be owned by a single family, it’s now shared among all the children because none can afford to buy a property next door,” Halseth notes. “Interesting how the market is actually following what had been going on in cottage

country for a long time.”

Perhaps no one understands this trend better than John Puffer, a 47-year-old cottaging addict who brought fractional ownership projects to Kashagawigamog Lake, near Haliburton, Ont. His newly constmcted three-bedroom cabins, located on a site called William’s Landing, bear the mstic hallmarks of those built by the area’s earliest

arrivals: full-length porches, Cape Codstyle gables, pine interiors still seeping beads of fresh pitch. As such, they reflect the simple version he built for himself on the rocky island a five-minute boat ride away, where his family has vacationed for nearly a century. “I’m a little biased because I spent every summer of my childhood out here,” says Puffer as we trek the lakeshore to look at one of his newer cabins. “But I

think the big question for a lot of people is: does it feel like a cottage?”

Apparently, yes. William’s Landing quickly sold out when it went on the market two years ago, as did a previous, almost identical project called Chandler Point, about five kilometres northeast. Puffer is now on his third development, near Orillia, Ont., and there is no shortage of clients willing to endorse his work. Don Biback, a 54-year-old real estate developer from Toronto, finds the one-tenth ownership model at William’s Landing perfect for himself, his wife and three university-age sons. “I didn’t want the maintenance hassle of owning a cottage,” says Biback, who paid more than $50,000 for his share. “Nor did I want to feel compelled to go every week because I owned the thing.” In this version of cottaging, Biback points out, housekeeping staff swab out the unit each week after checkout, while a management company takes care of such headaches as loose shingles and peeling paint. For their efforts, Biback pays an annual maintenance fee of $1,885.

Not everybody, however, is laying out the welcome mat for fractional ownership. Terry Rees, executive director of the Federation of

Ontario Cottagers’ Associations, notes that several recent projects in the tony enclaves of Muskoka and Lake of Bays have run into opposition because they look more like urban condominiums than cottages. Even the most rustic developments have spawned worries among established cottagers about an influx of newcomers. More owners, the critics reason, means more swimmers, more boats, more traffic, more garbage. “The intensity of use goes up when you go from a singlefamily, 200-ft.-frontage seasonal property,” says Rees, “to a multi-unit fractional ownership, where you’ve got maybe 30 people there all the time, every week of the year.”

Then there is the issue of the projects’ investment value. While there’s nothing to suggest shares in cottages won’t rise and fall with the rest of the real estate market, they remain relatively untried instruments in Canada. Puffer himself warns that buyers shouldn’t approach fractional shares as investments, while real estate analysts routinely warn that vacation residences lose value first when a market downturn strikes.

Yet, even with these caveats, the trend toward multiple ownership looks sure to take root. Blessed with unprecedented demand

for vacation properties, developers are finding ways of bringing “the most paying customers to the waterfront,” Rees says. Factor in a wave of retiring baby boomers—many of whom don’t fancy the labour involved in full ownership—and the mitosis-like proliferation of cottagers is sure to continue. “There are a lot of people who want to be there,” Rees adds, “and it’s a limited resource.” Back in B.C., Keith and Bender are now acutely aware of that scarcity. In April, the couple dashed off a $1,000 deposit cheque to join the roughly 70 so-called “priority purchasers” lining up for a crack at the Otter Bay development. But the site they visited last week suggested cramped quarters built to accommodate the maximum number of cottagers; they want wider vistas for their daughters. Still, Keith says, the exercise taught them that owning a piece of paradise is possible, and they are now looking into a fractional development on an island in Howe Sound. “It’s being built on, like, 30 acres,” she enthuses. “We still think [fractional] ownership is a great idea, and we’re not about to stop looking.” IK1 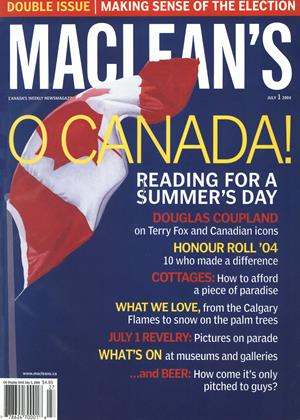