IT’S STARTING TO sink into the sandlot sensibilities south of the border that there’ll be no American baseball team at these Olympic Games. Few noticed last November when the U.S. collection of college hotshots and rust-belt minor-leaguers was knocked out of the qualifying tournament by Mexico.

“Sorry, Bucko,” laments Ron C. Judd, columnist for the Seattle Times. “Unless you can get Canadian TV, you’re not likely to see much of America’s national pastime beamed from Athens.”

That’s right, Bucko. Canada—land of the puck—emerged from that tournament in Panama to qualify for the first time since ball became an Olympic medal event in 1992.

It won’t be much of a seventh-inning stretch for Americans to adopt Team Canada, a squad that draws heavily from players on U.S. college and minor-pro teams. Greg Hamilton, Baseball Canada’s director of national teams, and manager Ernie Whitt are counting on stalwarts like Stubby Clapp, 31, who got Canada this far. Adding depth are two former Toronto Blue Jays, outfielder

Rob Ducey, 39, and pitcher Paul Spoljaric, 33. The roster fluctuated until last week. Players on major-league rosters (such as slugger Justin Morneau in Minnesota) were lost, while others (Expos pitcher Sean Hill) were added after being sent to the minors.

The Cubans, for whom baseball is a national passion, are favourites for gold. Japan is another threat. With the U.S. out of the picture, Canada has a shot at its first baseball medal, and a few Americans will likely eavesdrop on CBC or TSN to cheer their surrogate team. “It might be painful,” warns columnist Judd. “But not nearly as much as an hour and a half of rhythmic gymnastics.”

THE CANADIAN WOMEN’S softball team finished dead last among eight teams at the 2000 Summer Olympics in Sydney. No one expects a repeat of that dismal performance in Athens. The team began rebuilding after Australia, says head coach Mike Renney, who also coaches the Simon Fraser University Clan. Renney designed his 15-woman team around key rule changes: in Athens, the pitching mound is backed up to 43 feet from 40; and the outfield fences are pushed back to 220 feet from 200. “With a 43-foot pitching distance, it’s more of a hitter’s game,” says Renney. “And with 220-foot fences, speed comes into play because you have the extrabase hits, the hustle doubles and triples. We’ve got a pretty quick team.”

Captain and second-base Kristy Odamura of Richmond, B.C., welcomes the expanded outfield. “We’re not necessarily a home run-hitting team, so that will help us with our shots into the gap.” Pitcher Kaila Holtz of North Vancouver says all four team pitchers are used to the 43-foot mound from college ball. “In fact,” she adds, “if it was still at 40 feet, it would have been a problem.” The Canadians are light on Olympic experience, but Renney has seasoned them with international play, travelling frequently to face teams in the U.S., Puerto Rico, the Dominican Republic, New Zealand and Australia. The defending-champion Americans are favoured in Athens, with Japan a tough second. But Canada, Renney adds, is in a “dogfight” with Australia, China and Chinese Taipei for the last podium position. Kim Sarrazin, a catcher from St-Eustache, Que., says the team is experienced enough not to be thrown by the added pressure of Athens. “The Olympics is big, it’s huge,” she says. “But for an athlete, it has to be just another ball tournament.” M 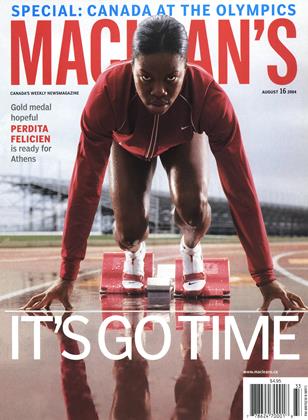