IF YOU HAD TO PINPOINT THE MOMENT when Toronto’s film festival came of age, it was exactly 20 years ago. In 1984, the festival staged a gala tribute to Warren Beatty, hiring a pair of private jets to fly him and his pal Jack Nicholson—Hollywood’s Mick ’n’ Keith—into town from opposite coasts. The same year it premiered feature debuts by the Coen brothers Jim Jarmusch, Steven Frears, Luc Besson and Atom Egoyan—a future pantheon of indie cinema. It also launched Perspective Canada as an annual incubator of local

talent, and staged a monumental retrospective of 200 Canadian films.

Last week Beatty was back at the festivalon the arm of his wife, Annette Bening, star of Being Julia, the opening night gala produced by Canadian mogul Robert Lantos. Now in its 29th year, the festival—which was almost bankrupted by the Beatty tribute— has enough financial clout that it’s raising $196 million to build and operate a new headquarters. And after two decades, Perspective Canada has been abolished, on the grounds that Canadian films can finally hold their own among international fare. This year they range from Rob Stefaniuk’s Phil the Alien, a hilarious farce about an alcoholic extraterrestrial, to Don McKellar’s Childstar, a mordant satire about a preteen celebrity who falls for a hooker in Hollywood North.

It has become a fall rite. Every September, after Hollywood folds up its circus tent of summer blockbusters, Toronto ushers in the pre-Oscar season of serious film-going. Lending brief credence to the city’s dreams of world-class grandeur, it also kicks off a chain reaction of film festivals across the country, from Halifax to Vancouver. With a program skimmed from the cream of Cannes, Berlin and Sundance—along with its own formidable roster of world premieres—TIFF now ranks as the world’s most vital and comprehensive film festival. As Sony Pictures Classics executive Michael Barker told me in a moment of frustration at Sundance last January: “Toronto is the full banquet.”

This year it began with dessert, the breezy opening-night confection of Being Julia. With Lantos at the helm, it’s a Canadian movie, co-produced with Hungary and the U.K. But aside from some familiar faces in minor roles, there’s not much identifiably Canadian about this conventional period comedy. Shot in Europe and based on a

novella by W. Somerset Maugham, it has a Hungarian director (István Szabó), a British screenwriter (The Piano’s Ronald Harwood) and a Hollywood star. Bening plays a London stage actress undergoing a mid-life crisis, a fading diva who revives her libido, and her ego, by having an affair with a young man, then plots revenge after he betrays her for an ingenue. It’s the ninth Lantos movie to open the festival, and its title could be interchanged with that of his first opening-night gala—1978’s In Praise of Older Women.

Being Julia is just one of many gilt-edged period pieces at the festival that frame showy, Oscar-style roles—Kevin Spacey as singer Bobby Darin in Beyond the Sea, Jamie Foxx as Ray Charles in Ray, Liam Neeson as the revolutionary sex researcher in Kinsey, Al Pacino as a luxuriously tortured Shylock in Merchant of Venice, Gael Garcia Bernal as a brooding young Che Guevara in The Motorcycle Diaries, Charlize Theron as a promiscuous socialite flirting with Nazi Germany in Head in the Clouds, and Bruno Ganz as a magnetic Adolph Hitler in Downfall.

All these actors are, in some sense, playing actors—larger-than-life characters engaged in a kind of heroic performance. It’s not inconceivable that, come Oscar time, we could see Mel Gibson’s Jesus Christ squaring off against Hitler, Shylock, Che and Ray. For Hollywood, history is the ultimate vanity mirror. But there’s a whole other realm of international cinema that works more like a window, offering clear and compelling views of the world around us. Running through the festival program—328 films from 61 countries—is a vivid streak of political substance. “A lot of the films that we’ve selected,” says festival director and CEO Piers Handling, “deal with serious contemporary issues—post-9/11, terrorism, Iraq, Israel. It’s not entertainment for entertainment’s sake.”

Noah Cowan, TIFF’s new co-director and heir apparent to Handling, has already had to fend off a protest over Casuistry: The Art

of Killing a Cat, a Montreal documentary about a video artist who killed, cooked and ate a pet to make a point about eating meat. The protesters hadn’t seen the film, which doesn’t show actual video footage of the feline atrocity, but they issued a death threat and numerous letters of outrage, and called for a festival boycott. Cowan found it curious that this title would get singled out in a lineup that also includes the most charismatic portrayal of Hitler ever brought to the screen (Downfall) and two portraits of Rwandan genocide—Hotel Rwanda and Shake Hands with the Devil: The Journey of Roméo Dallaire. The Dallaire documentary, directed by Canada’s Peter Raymont, tells a story that’s hard to watch, but even harder to turn away from—because that’s exactly what the world did when it was taking place.

Africa has the lion’s share of serious substance. The festival’s spotlight country this year is South Africa, and it has produced some fine work. In Darrell Roodt’s Yesterday, a stoical young mother in a Zulu village treks two hours to a clinic to discover she has AIDS. Set against a stark landscape of aching beauty, this tragic tale distills a continent’s unseen catastrophe into one woman’s calm, ennobling struggle. Directed by a white man, Yesterday is the first major film in the Zulu language, and in a post-apartheid South Africa, it arrives as a sobering inspiration.

Another two South African films, Red Dust and Forgiveness, examine the bitter fallout of apartheid, with characters torn between vengeance and reconciliation. Both are about former police officers seeking penance. In Forgiveness, an ex-cop visits a fishing village to seek redemption from the family of a man he murdered—and among its members, every shade of outrage and empathy is represented. What’s remarkable about the South African movies is how they find such pure emotional truth in issues with no easy answers. The same can be said for the Cannes hit Moolaadé, a masterpiece from 82year-old Senegalese veteran Ousmane Sembene—the drama of a village standoff that escalates when a mother moves to protect her daughter from female circumcision.

The Sea Within is another quiet tour de force that transcends a controversial issue. Directed by Spain’s Alejandro Amenábar (Open Your Eyes, The Others), this oddly lifeaffirming drama gently champions the right to euthanasia. As a quadriplegic with a death wish, Javier Bardem gives a performance so

ripe with wit and charm that you find yourself rooting for his right to die while desperately wanting him to live.

cream of other festivals with its own premieres, Toronto is the world’s most vital film showcase

which a woman pays a misogynist to watch as she performs acts that involve lipstick, a tampon and a garden rake—although the most disturbing scene involves a mean little boy who stomps a baby bird to death after feeding it a worm.

In this year of Fahrenheit 9/11, meanwhile, political documentaries go behind the headlines—from Gunner Palace, which follows

rapping U.S. soldiers on raids in Iraq, to Going Upriver: The Long War of John Kerry, which traces Kerry’s route from a Vietnam river patrol to his presidential campaign. And on the fictional side, veteran director John Sayles fires a scattershot broadside at American politics with Silver City, a Byzantine intrigue featuring a dim senatorial candidate (Chris Cooper) who sounds a lot like George W. Bush. But one of the most irreverent images of the White House can be found in the Canadian film Childstar— that of a 12-year-old Hollywood brat losing his virginity to a hired escort in a mock-up of the Oval Office on a Toronto soundstage.

Canadian cinema is often self-referential, and McKellar spells out its frustrations by making a movie about the absurdity of making movies in Canada. With his second

feature (after 1998’s Last Night), the sardonic writer-director casts himself as a failed auteur working as a driver for a spoiled American sitcom star who’s come to Toronto to shoot a dumb action movie—the kid plays a U.S. president’s son who battles terrorists after his dad is kidnapped.

This year Canadians seem to be carving out their own sub-genre of showbiz satire. Jiminy Click in Lalawood stars Martin Short as a porcine film critic from Butte, Mont., tangling with celebrities at... the Toronto film festival. And in André Forcier’s surreal Acapulco Gold, a narcoleptic crank drags a Hollywood producer to Mexico to pitch a story about finding Elvis—the producer’s name is Sturzberg, a likely reference to former Telefilm Canada chief Richard Stursburg, who became notorious for trying to nourish Canadian cinema in Los Angeles. Another Canuck showbiz comedy, It’s All Gone Peter Tong, offers a Spinal Tap-like mockumentary about a celebrity DJ who goes deaf. Directed by Michael Dowse (Fubar), it would make a bizarre double bill with Touch the Sound, a real documentary about deaf solo percussionist Evelyn Glennie, who “hears” with her body. Shooting on 35 mm, Germany’s Thomas Riedelsheimer creates visual

poetry to match Glennie’s virtuosity, and his film actually looks less like a documentary than Tong's video vérité spoof.

But the little Canadian film that seems destined to break out as a cult hit is Phil the Alien, a zany farce starring writer-director Rob Stefaniuk. He plays a shape-shifting extraterrestrial who falls to Earth in a small northern Ontario town, becomes an alcoholic, finds Jesus, and fronts the local bar band as a levitating rock star, while taking advice from a talking beaver. Dancing that fine line between clever and stupid, Phil the Alien is flat-out funny, and the wildly talented Stefaniuk could well be our next Mike Myers— a local hero who gives hope that in the glittering observatory of the Toronto festival stars can not only be seen, but also born. i?il 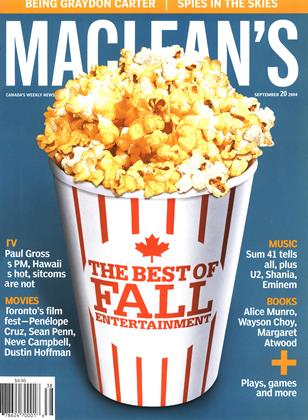