THE BEST POSSIBLE place to be for a Canadian who is an optimist is Place Jacques Cartier on St-Jean-Baptiste Day. This is the cobblestoned square, sloping down past a grain elevator to the St. Lawrence from the turreted balcony of Montreal’s City Hall, where Charles de Gaulle shouted his famed “Vive le Québec libre.” Circles of whey-faced teeny-bleepers, zonked on substances not liquid, hunker down cross-legged on the cold stones, waving aloft the blue and white Quebec flag. A clutch of resident winos attempt to dance in slow-motion syncopation to the toe-tapping cadences blasted out from the vintage-rock speakers high on the slope. With small exultation, thin boys yard in cardboard beer cases labelled “O’Keefe” and “Molson’s” and there are cheers as they are flung on the makeshift bonfires in the centre of the 15,000 beer-swigging celebrants. Ah, the Anglos to the torch!

Yet. And yet. One can remember, as somewhat of a Place Jacques Cartier freak, a St-JeanBaptiste Day a half dozen years ago. The same square, the same demographic slice of youthful Québécois, filled with beer and holiday abandon. Police were massed in hidden alleyways on the perimeter of Old Montreal. Riot clubs and plastic face masks were the holiday garb. A threatening police helicopter swooped back and forth over the heads of the crowd, its blinking red and green lights in the twilight mixing with the coloured balloons sent aloft by defiant denizens of the drinking cafés that line the square. There was, to an outsider, something in the intimidating menace of that helicopter overhead toward a resentful crowd that bore the seeds of a movement that climaxed on Nov. 15,1976. St-Jean-Baptiste Day in the past, in fact, was very useful market research for the Parti Québécois.

Now, that anger has been vitiated. The premature panic of the anglophones—not to mention the Anglo-Saxophones across the Prairies—had been subdued. Finally, oh, finally—the message has got through to the descendants of the Westmount Rhodesians: this holiday is not theirs but ours. It is not mere cultural homage to the patron saint of the French-Canadian voice: it is now Quebec’s Fête nationale. The mood and the mix of the beer drinkers reflect the withdrawing of anger.

Montreal, still the most interesting town in the country, has geographic layers unlike any other. Halfway down Place Jacques Cartier are the comfortable awnings of the Nelson Hotel, a familiar backdrop for the TV cameras as the home base for Robert

Lemieux, the lawyer who represented the FLQ in those now dreamy forgotten days. It is the statue, most ironically, of Lord Nelson that dominates this square that vibrates with the verve of young Quebec.

In a courtyard filled with crazily tilted tables that threaten to send the beer crashing on the stones, a meteorologist from Ottawa soothes her five-month-old daughter with a pacifier and introduces around her friends from Calgary, who, by their presence, extend a tentative shy hand to Quebec. “It is not,” says a Montrealer, “like other years when Anglos stayed away from Mont Royal for fear of trouble.” It is the PQ itself, spending over $3 million to convert a cultural feast into a provincial holiday, that is toning down the nationalist surges of this most symbolic of Quebec days.

The geography shifts to the amiable chaos on St-Denis, the street well away from the west side of Montreal, established by students and intellectuals as their protest against the trendy tourist cage of Crescent Street, where the plastic credit cards click like crickets in the night. On St-Denis it is acid rock and the cheerful abandon amidst the beer and dancing that English-Canadian youths cannot seem to capture without advancing into drunken stupor. A slice of style that separates us? Perhaps, but now the resentment is dampened, the hostility over the past six months slowly melting around the edges.

Over on Crescent, in downtown Montreal, a woman in a black New York Jets T-shirt bounces in rhythm on the steps of La Sexe Machine, a club featuring an outdoor wall of nipples—a tired reminder of what the 1970s thought was exciting. A hardrubber balloon, five feet in diameter, is batted from hand to hand above the heads of the throng that engulfs a block. In 1978, amusements have to be provided, not resentments repressed.

There is, in Montreal, the sense that the boil has been punctured. The reassuring spectre of Claude Ryan—with that totem of a face—as calmed the panicky Anglos of the west islands, just as it has altered the PQ into being more a pragmatic political party than an evangelical movement. There will be a different Quebec, as even the stiffly proud Pierre Trudeau has conceded in his surprising constitutional package that goes so far as to encompass the repeated ideas of a Bill Bennett ofB.C.

Quebec has moved a long way since that tumultuous night in the Paul Sauvé Arena. The PQ, though it may live to regret it, has sucked the anger from the province. It is hard to imagine René Lévesque as a pacifier, but that is what he has become. The PQ and René may very well have been the escape valve, not the engine at all. 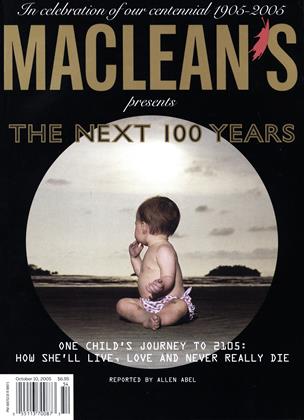