Jeffrey Rosenthal doesn’t want to be known as a math geek. Yes, his parents, grandfather and uncle all taught math, and he got his Ph.D. from Harvard at the age of 24. And yes, he writes thick college textbooks full of weird squiggles and symbols. But Rosenthal, a professor in the department of statistics at the University of Toronto, insists he is not “some nerdy genius with no interest in anything but mathematics.”

Proof? Rosenthal, a tall and solid man with an emphatic puff of curly hair, is an accomplished amateur musician who performs on keyboards, guitar and harmonica. And he’s an occasional Serial Diner, which is to say he belongs to a group whose mission it is to dine at every restaurant in the Toronto Yellow Pages, in alphabetical order. The Serial Diners, who celebrate their 16th anniversary this week, meet every Friday and have reached the middle of the H listings.

“You don’t spend 45 minutes arguing, ‘Should we go to this restaurant or that one?’ There’s no choice, you have to go to the next one on the page whether it’s good, bad, or

about to be closed for health violations,” says Rosenthal. “We rarely make reservations, so sometimes there’s no room for us—or it’s a fancy place and they look us over and decide there’s no room.”

And this particular hobby isn’t a little, urn, geeky? “Just as a group of people might decide to climb Everest, they might also decide to work through the Yellow Page listings of restaurants,” Rosenthal laughs, with the contented air of a man who doesn’t care what anyone else thinks. Except he does. He wants to become the Oliver Sacks of mathematics—and that requires appealing to a general audience, as he does in his recent math-for-the-masses primer, Struck by Lightning: The Curious World of Probabilities, already in its third printing.

Numbers are fun is the main message of the book, which explains to the layman how to analyze the likelihood of seemingly random events—crime, plane crashes, winning the lottery—using a probability perspective, and how to interpret polls and medical studies. Among other things, Rosenthal explains why computers are unable to create true ran-

domness—they can only fake it—and why you’re more likely to die of a lightning strike in Wyoming than in Rhode Island. It’s the kind of entertaining romp, grounded in quotidian anecdotes, that makes you feel a little smarter than you really are.

Yet Rosenthal did not even tell most of his colleagues he was writing it. “In pure mathematics there’s a feeling that you write for the general public because you can’t hack it in the research world.” It’s not a perception he wants to encourage at the age of 38, which is verging on old fogeydom in the rarefied world of cutting-edge math. “It’s a young person’s game: there’s the idea that it requires a sharpness of mind that fades with age. The Fields Medal, which is the mathematical equivalent of the Nobel, is only given to mathematicians under 40.”

So while Rosenthal is eager to popularize quantitative ideas, he does not want to lose the respect of the few dozen other experts in the world who research Markov chain Monte Carlo algorithms.

This is why, perhaps, no mathematicians were invited one evening not long ago when he performed at the Black Dog Theatre in Toronto along with some other improv comics and pretended to be, in rapid succession, a banana farmer, a dumb boyfriend, and a zookeeper. Improvisational comedy requires not just mental agility but a willingness to risk looking like a damn fool; leaping around in

a faded green polo shirt and pleated khakis, Rosenthal, who has been doing improv for about 10 years, appeared to have nailed both requirements.

Afterward, the performers retired to a bar. “I like to keep various aspects of my life fairly separate,” Rosenthal said, sipping a soft drink. (Aside from having half a beer on one occasion and tasting champagne on another, he doesn’t drink.) “Hey, did I just read somewhere that you wrote a book?” someone asked, out of the blue. Rosenthal’s smile was friendly, but his nod was noncommittal.

This ambivalence is even more evident in the classroom, where, like many professors, he assigns his own book. He may be the first, though, to keep a sack of toonies on hand as penance. “It seems like a conflict of interest to make a profit off my students,” he explained. “I get about $2 for every copy sold, so I refund that if they want me to.” So far, the sack is still full. M

Narcotics police in Skegness, England, were giving a school demonstration on how dogs sniff out drugs when they put a packet of speed in 10-year-old Kia Butterfield’s school bag. The trouble was they forgot to take it out after the demo, and Kia found it later when she got home. Kia’s irate mother said her three-year-old, Kenya, was playing near the packet at the time of discovery. “She could have mistaken it for a bag of sherbet,” Amanda Butterfield fumed. 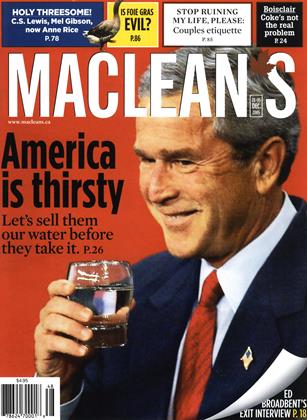