“It’s good war is so terrible, for we should become fond of it. ”

MICHAEL Byers didn’t exactly have Robert E. Lee’s doleful conclusion about the human species in mind when he wrote War Law: Understanding International Law and Armed Conflict (Douglas & McIntyre). The purpose of Byers’ slim but urgent volume was to set out, first, the legal rules that govern war between states—and the conduct of those wars when they do occur—and, second, the growing divergence of the United States from that international consensus. But Lee’s remark does form an uneasy subtext running throughout War Law: how safein terms of its own soldiers’ casualties—war can now seem to a nation that possesses an overwhelming technological edge, and how tempting it is to adopt questionable military tactics to reduce those deaths even further. “It was thought after the Second World War,” Byers told Maclean’s, “that the human cost would prevent future wars. But against a weaker opponent, politicians will go to war if they think the damage will be light.”

Byers, 39, is a one-time Saskatchewan farm boy and the very model of the modern globetrotting academic. He and his English wife, Katharine (they met during his stint at Oxford), have two American children, born during Byers’ time at Duke University in North Carolina. He’s now the Canada Research Chair in Global Politics and International Law at ^ the University of British Columbia, and a major figure in a once sleepy field that’s suddenly newsworthy. His book tracks the international legal system from its radical reformation under the UN Charter of 1945, which banned aggressive conflict and turned the world’s war departments into ministries of defence, through the developments of the 1990s. The end of the Cold War—and the UN’s futility in the face of the Rwandan genocide-

brought increasing pressure on Western nations to intervene within states for humanitarian purposes.

That impulse brought about the illegal—because it was not authorized by the UN Security Council—but popular NATO intervention in Kosovo in 1999. Byers applauds, on the whole, the emerging legal principle that advanced nations owe a degree of care to “failed states,” those riven by civil war or ethnic cleansing. But he urges caution: “We have to weigh humanitarian intervention against the possibility that restraint might save more lives—and bear in mind that we could end up

'Instead of simply torturing captives,

playing into the hands of those who want to intervene for less high-minded reasons. Tony Blair did just that—he cited Kosovo as a precedent for the invasion of Iraq.”

The indispensible nation in these developments, good and bad, has been the United States, “the historic champion of the international legal structure and of humanrights law,” according to Byers. That makes its recent unilateralism all the more worrisome to him. Byers dismisses the reckless claim that the U.S. is some sort of rogue nation. “The Americans have not rejected international law,” he says, although they are trying to push

it in a direction the rest of the world doesn’t want, notably in George W. Bush’s doctrine of pre-emptive self-defence. But the U.S. remains within the system, Byers notes, sardonically adding: “Instead of simply torturing captives, the Americans get a legal opinion that allows torture.”

It’s America’s actions during the Iraq invasion, even more than its justifications for going to war, that truly anger Byers. Here, too, Kosovo proved a precedent. “One of my Oxford colleagues then was a retired RAF air marshall. He was incensed by the unnecessary killing of civilians in NATO bombing runs—to reduce their casualties, pilots were not allowed to fly below 15,000 ft., a level from which they couldn’t tell civilians from Serb forces. The RAF man told me, ‘We’re trained to take risks with our lives.’ Since then, I’ve constantly heard that from military men, that they can fight by the rules and still win. They want to fight by the rules.” Yet in the war on terror, precisely to cut down on the politically charged deaths inherent in close combat, U.S. forces have engaged in indiscriminate attacks—notably in last year’s assault on Falluja—that have killed hundreds of civilians.

No group is more disturbed by such tactics or by the Bush administration’s policies on prisoners of war, Byers says, than U.S. military lawyers. They know that the treatment of prisoners at Guantánamo Bay and Abu Ghraib—which Byers calls “the biggest own goal imaginable”—has not only seriously damaged the U.S. effort against terrorism, but put their own men at risk. (It’s a risk—and a taint—shared by America’s closest allies. Canadian troops in Afghanistan have handed over captives to U.S. forces there—a bad move, Byers thinks, and “probably a violation of Canada’s obligations under the Geneva Conventions and the 1984 international torture convention.”)

FINALLY A BOOK ABOUT... MENNONITE COMEDY

Miriam Toews’ A Complicated Kindness mined it all the way to the Governor General's award, and now Byron Rempel is giving it a trygrowing up Mennonite in small-town Manitoba, that is—in Truth is Naked, All Others Pay Cash (Great Plains). Rempel’s humorous memoir of his people’s quirks includes their “reverence for all living things except those that tasted good when fried in butter,” and how his mom sewed his underwear shut to preserve his virginity.

So it’s no accident that the strongest American advocate of enemy POW rights is Sen. John McCain, who was a prisoner during the Vietnam War: soldiers know what goes around comes around. Byers quotes one former Vietnam POW as saying to him, “My captors violated the Geneva Conventions every day, but without them they would have killed me.” It all adds up to bad law and bad policy in Byers’ opinion, acts that will have repercussions for years. “War law consists of rules worked out by previous generations that should protect us from the consequences of short-term thinking. History will look back at this moment.” M 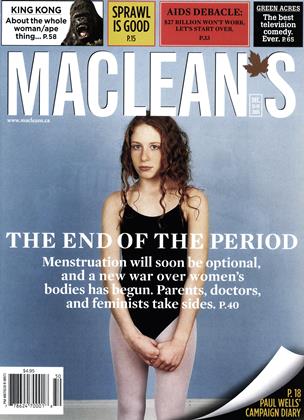