The future will be a wonderful and futuristic place in which society’s ills have been vanquished, prosperity achieved for all and, if I get my wish,

Terrell Owens will be marking the seventh an-

niversary of having abruptly and inexplicably lost the power of speech.

Let us therefore shield our eyes and look to the future in a new and occasionally recurring feature we shall call Looking to the Future. (In the future, such pedestrian titles will seem creative and clever. Don’t ask me how.)

In the wonderful future, movies might not suck so much! A scientist at Oklahoma State University claims to have devised a computer program capable of predicting if a film is going to be a flop. Professor Ramesh Sharda calls his creation a “powerful decision aid” for the movie industry, one that can analyze a movie even before it is made to forecast its box-office performance. If this high-tech system proves reliably accurate, it could replace the current, time-tested method of predicting a bomb—successfully finding in a film’s credits the words “Kevin” and “Costner.” According to media reports, Prof. Sharda has been working for several years on training an artificial neural network to recognize the telltale signs of a costly film failure. Currently, the network is getting it right about 75 per cent of the time, he says. For instance, his system correctly predicted that the Harry Potter series of films would be wildly successful— which proves beyond doubt that it has a fully functional, state-of-the-art Duh processor.

Right now, the neural network considers seven key factors during its prognostic process, including a film’s rating classification, its genre and the number of special effects it features. It doesn’t pay attention to a movie’s plot—but then again, neither do most people who work in the industry. Word is that Prof. Sharda’s research will be published in the journal Expert Systems with Applications early in 2006—or, to put the timing in the context of Hollywood, approximately seven John Travolta movies too late.

In the horrible future, we are all doomeddoomed I tell you!—doomed! Computers can do just about anything! They are supersmart and yet also capable of demonstrating tremendous benevolence toward portly, bespectacled magazine columnists—and I’m not just saying that because they will one day soon be humanity’s overlords and I would

very much prefer not to toil in slavery in the silicon mines.

Alas, further evidence of our species’ impending servitude comes from the University of Amsterdam, where a computer program has at last explained the centuries-old mystery of the Mona Lisa’s smile. This is grave news indeed. If computers can crack art’s most enduring riddle, it’s only a matter of time before they unlock the Caramilk secret—and we all know it’s but a short step from that intellectual triumph to systematic global domination.

As we therefore take our last sip from the cup of freedom, let us collectively curse Dr. Nicu Sebe, for it is he who developed the “emotion-recognition software”—capable of “teasing apart” the emotions behind a facial expression—that enabled a computer to clinically decipher Da Vinci’s masterpiece. Its conclusion? The enigmatic smile reflects many different emotions being felt simultaneously. Specifically, the algorithm revealed Mona Lisa to be 83 per cent happy, nine per cent dis-

gusted, six per cent fearful and two per cent angry. Also, she’d apparently just eaten a muffin. (Well, that’s not actually true, but I’m really banking on even cold, logical computer despots being open to retaining on staff a court jester. I even have my own hat.)

In the wonderful future, we will be able to telephone our dogs for some reason! A U.S. company has developed PetsCell, a boneshaped cellular phone and tracking device that fits onto a dog’s collar—thus enabling its owner to locate the pet via Global Positioning System or simply give it a call during the day.

Why would anyone telephone their dog during the day? Perhaps to angrily remind ol’ Rex that the ridiculous bone-shaped phone he’s wearing cost several hundred dollars, plus more each month for the calling plan, and would it really be too much to ask in return that he stop humping the ottoman? The product is being touted as the perfect gift for the dog who has everything. This apparently was chosen over the more logical slogan—the perfect gift for the dog who has a mentally defective owner. M

Scott Feschuk can be reached at sfeschuk@ sympatico. ca 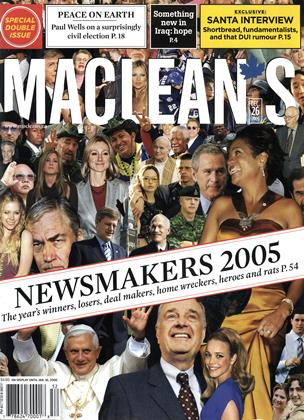