LIBERAL STEPHEN LEDREW can wryly recall his rash suggestion in the late 1990s to an influential Jean Chrétien loyalist. “Why don’t we appoint John Turner as our next governor general?” former party president LeDrew asked at an Ottawa cocktail party. He pointed out that the former PM knew every nook of Canada, its people and its history. “He’s a national treasure,” LeDrew added. Incredulous and aghast, the Chrétien staffer could only sputter: there was too much animosity between those two former leadership rivals. Had LeDrew lost his mind?

Sure enough, for more than a decade, Turner was largely ignored by the Chrétien Liberals. He remained a partner at his prestigious Toronto law firm, quietly making non-partisan speeches for long-time causes such as parliamentary reform. It was only last December, when Paul Martin asked him to lead a 500-person delegation of election observers to Ukraine, that his political smarts were finally tapped. “His very presence raised the status of that delegation,” marvels Paul Grod, who led a parallel observer team from the Ukrainian Canadian Congress.“John Turner is experiencing a renaissance.”

For the estimated 1.1 million Ukrainian Canadians, the 75-year-old statesman is a great gift. The congress has asked him to join a high-profile,

Ukraine-Canada advisory group that could help Ukraine in its quest for membership in the World Trade Organization and the European Union. For the Liberals, who drew on their new Canada Corps program, which funds domestic expert teams overseas, Turner’s suc-

cess abroad could mean ethnic votes at home. Turner himself remains modest. “I believe in democracy and Ukraine was a classic example of democracy trying to breathe,” he says. “Now we have got to reach out to them, to enhance our trade and our cultural relationships.”

The week-long trip certainly tested his political skills. Turner’s former aide, Marc Kealey, who accompanied him, says that on the flight to Ukraine, Turner predicted Canadian bureaucrats would try to lure him to desired meetings with Ukrainian officials that they could not otherwise secure. Sure enough, our diplomats proposed talks that had nothing to do with his mission; Turner emphatically refused to attend. He also astutely counselled Martin to wait until Ukraine’s supreme court ratified the latest election results before granting recognition. “He knew it was a very volatile situation,” says Kealey.

So what’s next? Turner occasionally delivers historical speeches about everyone from Sir John A. Macdonald to Winston Churchill. He champions ordinary MPs—a cause he first espoused as a backbencher in 1963. “The role of MPs has diminished because of the strength of the bureaucracy, party discipline and the cult of leadership,” he says, dismissing proportional representation as an illusion that merely weakens parliamentary government. And Ukrainian Canadians revere him.

But John Turner’s new profile also raises unsettling questions about the destructive effects of the Liberals’ endless feuds as Martin and Chrétien forces still squabble. The enmity is visceral: staffers from Chretien’s PMO once sat in an Ottawa-area parking lot, noting the names of Turner’s birthday guests. But the ones who have really paid the price for that indulgence, if only in lost expertise, are the voters. I!fl 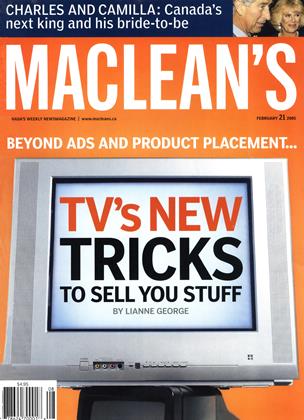