IN THAT Christmastime chestnut, It’s A Wonderful Life, down-on-his-luck good guy George Bailey wishes he’d never been born because he thinks everyone would be better off without him. George’s guardian angel, Clarence, then shows him how different life would be for residents of the small town of Bedford Falls, N.Y., had George been granted his wish. “It’s strange, isn’t it,” Clarence tells George. “Each man’s life touches so many other lives. When he isn’t around, it leaves an awful hole.” Not always. Just think how many people would be better off had James Roszko not been born 46 years ago in the central Alberta town of Mayerthorpe. Chief among them are the four young RCMP constables the hate-filled Roszko shot and killed at his farm

Thousands came from across the continent for an emotional farewell

on March 3, before turning his high-powered, rapid-fire rifle on himself. Another young man, whom Roszko repeatedly sexually assaulted in the 1980s, starting when the victim was just 10 years old (one of the few crimes for which Roszko did jail time), would have been spared a lifetime of anguish. The same goes for a 29-year-old Mayerthorpe-area man who says Roszko forced him at gunpoint to perform oral sex in the early 1990s (though several charges were laid, the case fell apart after Roszko allegedly intimidated key witnesses, including his victim).

The list goes on and on. The Mayerthorpe man Roszko threatened to have killed, putting a $10,000 bounty on his head. The former friend he held at gunpoint. The

neighbours he fired warning shots at from his farmhouse bunker. The cops he verbally abused and whose families he stalked. All would have led quieter, happier lives had James Roszko never walked this earth.

But, of course, he did—and we are all forced to deal with his grisly legacy. Last week, family and friends laid the four slain officers to rest in their home communities, and thousands of others gathered in Edmonton for an emotional national memorial service—the largest such ceremony in RCMP history. Assembled dignitaries, as well as loved ones of each of the murdered Mounties, addressed an overflow crowd of 13,000, most of them police officers who came from across the continent in a show of solidarity and respect. Looking out on a sea of red serge, Prime Minister Paul Martin eloquently summed up the collective sense of loss. “We are left numb,” he said, “that a single act of hate has affected so many lives, caused so much grief, interrupted so much love.”

Beyond the pain Roszko inflicted on individuals, one of the most remarkable things about his final crime—on its surface, the random act of a deranged killer—is how it managed to strike at the heart of so many hot-button issues in Canadian public life. The most talked about, if perhaps the least relevant, is the so-called war on drugs. In-

stant analysis in the wake of the shootings— led by no lesser authorities than Deputy Prime Minister Anne McLellan and RCMP Commissioner Giuliano Zaccardelli—centred on “the scourge” of marijuana grow ops. By last week, that spin proved bogus,

so much so that Zaccardelli publicly apologized for giving “what I believed was the best information I had, knowing full well at that time I didn’t have all the information.” We now know the RCMP had been summoned to Roszko’s farm on March 2 to assist with the repossession of a 2005 Ford pickup Roszko had leased from an Edmonton company. It was only then officers discov-

ered stolen auto parts and 20 mature pot plants and initiated their fateful overnight stakeout. To the degree marijuana played a role in the RCMP’s decision to guard Roszko’s farm, it arguably bolsters the case for legalizing (as opposed to “decriminalizing”) this relatively soft drug and then regulating and taxing it, much as alcohol is now. That way, criminals would be robbed of a lucrative enterprise and no more police officers need die enforcing such a dubious prohibition.

A more pertinent issue is what the tragedy says about Ottawa’s controversial national gun registry. Canadians have already shelled out more than $1 billion to license gun owners and register firearms. While law-abiding hunters, ranchers and gun collectors have, often begrudgingly, paid their fees and signed on, it’s been obvious from the start that rogue criminals were never going to comply.

A court order dating back to 2000 banned Roszko from owning firearms. But friends and family members say he cleverly stashed away weapons on his farm, including automatic rifles that fire bullets until the trigger is released or the ammunition clip is empty. Between 1993 and 1998, RCMP searched Roszko’s property three times for illegal or unregistered firearms. While they seized a shotgun and a handgun, they failed to find the HK.308 automatic rifle

they had been told Roszko possessed.

The Mayerthorpe tragedy gives long-time critics of the firearms registry fresh ammunition. “The registry focuses on the good guys in society while criminals make a mockery of it,” says Yorkton-Melville Conservative MP Garry Breitkreuz. “Instead, we should spend that money on the front lines, helping police to do their job.”

A strong argument, to be sure, but Roszko’s repeated ability to flout the law raises another top-of-mind issue: did the justice system fail us? Roszko was charged with many things, convicted of very few. The only serious jail time he did was 2lk years for sexual assault before being released on mandatory parole in 2002 (typically, Roszko showed no remorse for his actions and refused to accept treatment for sexual deviance). Kim Connell, a retired RCMP corporal and now Mayerthorpe’s deputy mayor, blames a triumvirate of crafty defence lawyers, plea-bargaining prosecutors and lenient judges. “The biggest problem with our system is that criminals have all the rights,” says Connell. “The victims and the public have none.”

Connell, who served in Mayerthorpe for nine years, recalls how belligerent Roszko could be even when pulled over for minor traffic offences. “As soon as you stopped him, he was screaming at you, throwing stuff,” says Connell. “He was all about intimidation.” Still, Connell says no one could have foreseen the town menace one day cutting down four police officers in cold blood. “That’s so far out of the vision,” he says. “It’s just unbelievable.”

And there’s the rub. Trying to make sense of Roszko’s destructive life, and especially his last horrific deed, raises questions that range far beyond the law and public policy. It goes to what theologians call “the problem of evil.” How can an all-powerful, all-loving God allow such a thing to happen? For believers like Don Schiemann, a Lutheran minister from Stony Plain, Alta., and father of 25-year-old Peter Schiemann, the youngest of the four slain RCMP officers, there is an answer. “God grants to people free will,” he said just two days after the fatal shootings, “and with free will, some people choose to do great evil. But I also know how great is God’s love for us.”

Admirable words, full of compassion and deep conviction. But they don’t quite staunch the thought, however futile, that this one evil man could somehow have been stopped. R1 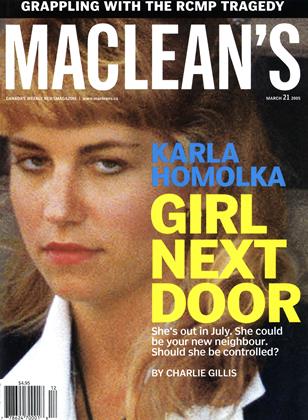