A FEW WEEKS AGO, I found myself at Blockbuster, renting Troy—the widely panned 2004 adaptation of Homer, starring Brad Pitt’s golden locks. True to expectation, nearly three hours of Pitt looking sullen in a breastplate are indeed too much. So I left the DVD to languish, partially watched, on my coffee table for a week. Having seen Blockbuster’s “No More Late Fees” TV ads— featuring families rejoicing and couples making out—I figured the store was in no hurry to get it back. Of course, upon dropping it off, I found a fee had been charged to my account. Not a “late fee,” but a less punitivesounding “restocking fee” of $1.75.

In its pending lawsuit against Blockbuster, the State of New Jersey is calling the company’s No More Late Fees advertising campaign “fraudulent” and “deceptive.” But for most consumers, accustomed to creative truthtelling in commercial messaging, it comes as no surprise. Laura Penny, the Halifaxbased author of an upcoming book, Your Call Is Important To Us: The Truth About Bullshit, suggests that North Americans have become so used to linguistic manipulation in advertising, we’re rarely bothered by it anymore. BS, she says, “thrives on low expectations.”

The history and proliferation of bullshit is the subject of two new books. According to former Princeton philosophy professor Harry G. Frankfurt, author of a slim volume titled On Bullshit, BS is a tricky beast because it’s not quite the same as a lie. Whereas a liar knows he’s not telling the truth, the bullshitter doesn’t care whether he is or not. Rather, it’s something that is tangential to the truth—messaging that is manipulated to provide a more pleasing interpretation of the truth, designed to serve the teller only. “We live in an era of unprecedented bullshit production,” says Penny. With media being so pervasive, BS now permeates just about every aspect of our lives. Though we didn’t invent it, she says, “North Americans have supersized it. We’ve made it faster, stronger, more ubiquitous.” In fact, one could argue that BS has become our unofficial second language. It’s in advertising and political speeches. It’s in the public relations-driven spin of some news stories and in the impenetrable subclauses of our mortgage agreements. (“I think the boring parts are where they keep the consequences,” Penny says.) BS is systemic, virtually impossible to manoeuvre around—even when we see it coming from a mile away. Most of us don’t just accept and expect it, but have learned to generate it pretty well ourselves.

Which is why most people will not complain about paying a restocking fee at their local Blockbuster (it’s still cheaper than late fees). Truth is, if we got angry every time we came up against a load of BS, we’d only drive ourselves insane, not to mention those around us. Says Penny, “I can ruin a party in about five minutes.” 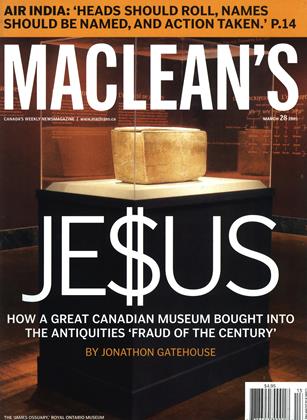