BY MY RECKONING, no matter how much snow drifts across the walkway, it is balmy spring when a Lee Valley garden tool catalogue arrives at the door. There are pruning shears and plant trays, glass wasp traps and seed starters. There are even gizmos such as rotating composters that require only a spin to mix their slimy innards. All are described in briskly practical, oddly alluring prose. You may not know such a gadget existed— but suddenly you need it.

And that has ensured Lee Valley Tools Ltd. remains an enduring Canadian success story. This year, under the shrewd eye of founder Leonard Lee and his son, Robin, who is now president, the Ottawa-based firm will churn out 21 different catalogues offering everything from woodworking devices to hardware for customers from New Zealand to the Northwest Territories. As well, there are 11 retail stores ranging from Halifax to Vancouver. Estimated annual sales are now a whopping $150 million. “He has such a reputation for quality that he has little competition in his market niche,” says Leonard Lee’s long-time pal, policy guru Shelly Ehrenworth, who once attended a funeral where the minister thanked the deceased for introducing him to Lee Valley and then ruefully bemoaned how much it had cost him.

The creator of this empire is a 66-yearold former federal trade official who simply could not tolerate bureaucracy. Born on a Saskatchewan farm where “we focused on being poor,” he joined the air force to get an education. But, as a pilot-in-training, he was always airsick—so he shifted to econom-

But we are now locked tightly into that economy.

ics. By 1978, fed up with nitpicking rules, he quit the civil service, took out three mortgages on his house and used his childhood woodworking expertise to design carpentry tools. Even today, the firm devises and makes about one-third of its products.

Leonard Lee and his wife, Lorraine, deploy those tools to grow everything from peas to 140-kg pumpkins on their 30-hectare farm near Ottawa. He remains self-deprecating, feisty, a policy wonk who was a founding member of the prestigious Public Policy Forum and an ongoing federal critic. When costs for the hapless gun registry skyrocketed, he dourly observed that his firm already had the perfect software to service millions of orders. (“Their system was just insane.”) And when a handful of rogue MPs slammed U.S. foreign policy in scathingly personal terms last year, he watched his sales flatten with outspoken alarm—because 25 per cent is shipped south. “I never wanted free trade,” he says. “But we are now locked tightly into that economy. Why such anti-Americanism?”

His life’s third act is another gamble. Four years ago, an Ottawa plastic surgeon abashedly confessed that he used Lee Valley’s keenly honed knives on the job—because basic medical tools like scalpels had not evolved much over the past century. Recruiting the doctor as an adviser, Lee set up Canica Design, which has created innovative surgical devices such as scalpels with ejectable blades, as well as kits with elasticized bands and sticky pads to seal huge wounds.

The master sees a clear moral in his experience. “Students come through a risk-averse education where even the teachers want tenure,” Lee says. “I tell them to take a risk because it is exciting. And if you really like what you are doing, you can do well.” Spring may have come early to my household. But in Lee’s life, it seems perpetual. I?] 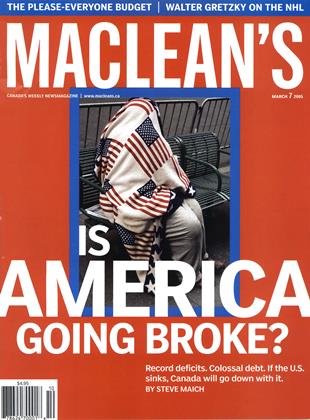