TIMOTHY TREADWELL is a 46-year-old blond American with a Prince Valiant haircut who looks like a cross between Jeff Daniels in Dumb and Dumber and Owen Wilson in Starsky & Hutch. And he’s starring in the story of his own death. In October 2003, Treadwell, along with his girlfriend, Amie Huguenard, was killed and eaten by a grizzly at their tent—after 13 summers of trying to get up close and personal with bears in the wilds of Alaska. Treadwell shot more than 100 hours of video—not just of grizzlies, but of himself, obsessively taping take after take of stand-up commentary, as if he were hosting his own gonzo reality show. Treating the camera as his confessor, he delivers manic rants that swing from tears to profanity. Eerily, just days before dying he says, “Every second of every day that I move through this jungle, or even at the tent, I am right on the precipice of great bodily harm or even death ... Let me tell you, ladies and gentlemen, there’s is no, no, no other place in the world that is more dangerous.”

He proved his point. And veteran German director Wemer Herzog has culled Treadwell’s video diary to create an astonishing film. Grizzly Man is one of more than 100 entries from 23 countries showcased at the 12th edition of Toronto’s Hot Docs (April 22 to May 1), North America’s largest documentary festival. It’s an extreme example of a growing genre that could be called the Darwinian documentary: survival of the fittest (or not) as a spectator sport.

In Barbara Kopple’s Bearing Witness, five female journalists tell harrowing stories of surviving combat zones. In Gymnast, a sobbing teenage girl undergoes surgery to plant a titanium rod in her shin so she’s fit to compete in the Olympics. In Murderball, quadriplegics carry on a bitter CanadaU.S. feud with full-contact wheelchair rugby. Taking ‘docusport’ suspense to absurd extremes, Lifelike counts down the days as taxidermists prepare for a competition in Orillia, Ont. Hitting theatres outside Hot Docs, meanwhile, The Year of the Yao turns the NBA saga of a seven-foot, five-inch Chinese rookie squaring off against Shaquille O’Neal into documentary fable. And Gunner Palace, which has U.S. soldiers in Iraq rapping to the camera, plays like a dire reality show—Survivor: Baghdad.

Documentaries do seem to be absorbing the ethic of reality TV. Everything becomes a contest, and a showbiz opportunity—from dodging rocket-propelled grenades to being eaten alive. In fact, the word “documentary” just doesn’t cut it any more. In these films, the camera isn’t documenting but working on its subjects like a performance-enhancing drug.

Sports documentaries tend to play out as morality tales, with clear-cut heroes and villains. Take Murderball, a fierce Mad Max spectacle of quadriplegic gladiators smashing into each other in armoured wheelchairs. The villain is Joe Soares, a vengeful Yankee hothead who defects to coach the Canuck team after being cut from the U.S. squad. This

guy’s even cruel to his 12-year-old son. So as a Canadian you end up rooting for the Americans and their heroic star, Mark Zupan. The Year of the Yao, charting Yao Ming’s rise from nervous newcomer to NBA hero, offers another mythic duel. With a nation of 1.3 billion looking up to him, China’s gentle giant is all modesty and grace as he confronts the bellicose Shaq—a contest as rich in cultural stereotypes as Muhammad Ali’s fight with George Foreman. But the story’s told through the eyes of Yao’s nervous U.S. trans-

lator, Colin Pine, who doubles as narratorconflating the film’s perspective until it gets lost in the slipstream of Yao’s celebrity.

It’s hard to find a documentary subject who doesn’t perform for the camera—even the Alaskan coroner who sifted through the “four garbage bags of people” taken from the guts of Grizzly Man’s killer bear. He reconstructs the victims’ last moments in such dramatic detail it’s as if he’s auditioning to play a coroner. And in Gymnast, teenage Olympians who are rattled by the pressure

of competition glow with confidence under the therapeutic gaze of the camera.

But what’s truly bizarre is to see soldiers in Iraq issuing sound bites as semi-automatic music. The Vietnam War didn’t acquire a backbeat in the public imagination until after it was over—as movies like Apocalypse Now and Platoon put a psychedelic spin on the delirium of fighting an enemy you couldn’t see for a cause you couldn’t defend. With Iraq, it’s all happening much faster. Gunner Palace shows the soldiers acting as if they’re already

in a war movie, and they’re improvising their own score, a kind of G.I. gangsta rap fired with raw fear. With COPS-style bravado, the camera follows a squad of U.S. soldiers as they bash down the door of an Iraqi home in the middle of the night, and handcuff a suspect before terrified women and children. Back at their base, a bombed-out palace in Baghdad once owned by Saddam Hussein’s son Uday, soldiers dance by the pool to My Girl. One young recruit spends his nights playing electric guitar at the palace gates. Another soldier unleashes a freestyle rap while his buddy pounds out the rhythm with his fists on the hood of an armoured Humvee: But when those guns start blazing and our friends get hit/That’s when our hearts start racing and our stomachs get woozy/Cuzfor fall this is just a show, but we live in this movie.

Just as real-life gangsters would mimic The Godfather’s fictional mobsters, soldiers take their cues from the movies. “The colonel at the pool party wears an aloha shirt sent by his wife,” says co-director Michael Tucker. “He’s living inM*A*S*H. For the teenagers, it’s Jackass Goes to War.” Tucker recalls asking to go out with a unit one day and being told, “You don’t want to go out with them, they’ve watched Platoon too many times.”

Gunner Palace is a reality show with no escape. “Survive this,” says the narrator, “a year in Baghdad without changing the channel.” It’s been attacked by the left as a recruiting ad and by the right as an anti-war movie. That’s because it surrenders its viewpoint to the soldiers, who know only chaos. Most are kids fresh from high school who enlisted because they had no future. Now they’re moving targets in a lethal arcade, afraid their deaths could pass unnoticed as the war slips from the headlines.

One of the strongest films in Hot Docs is about the people who try to keep that from happening. Bearing Witness takes us behind the scenes with five intrepid women who cover combat—including American photographer Molly Bingham, who spent eight frightening days in Saddam’s Abu Ghraib prison, and Marie Colvin, a Sunday Times correspondent who was blinded in one eye by a grenade in Sri Lanka. As journalism about journalists, Bearing Witness achieves a three-dimensional veracity. And because these battle-scarred survivors have forged powerful careers behind the eye of the camera, they’re under no illusions that they’re living in a movie. I?J1 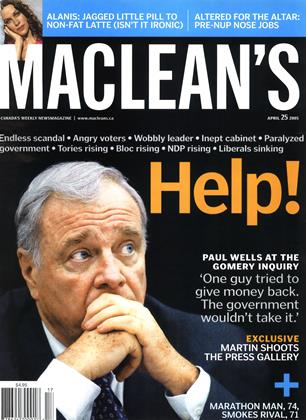